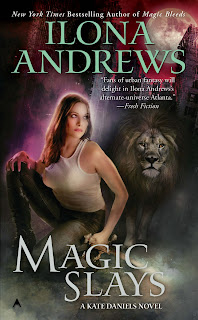 Kate now runs her own agency, joined by Andrea whose attempts to make the Order accept her humanity failed in the face of their prejudice. And the Red Guard has come to her with a job – they were guarding a weapon. A weapon of incredible power. And it has gone missing, along with its inventor. Under the cloak of necessary secrecy and discretion, the Guard need Kate to find the weapon and the inventor, preferably before its power is unleashed

But as magic has eroded technology, so there are humans who long to return to technology – and who loathe magical people. The Order is not the only ones who refuse to accept the humanity of magical people. The Lighthouse Keepers are a deep cover terrorist organisation that have infiltrated many organisations in the hope of bringing them down. And with their hands on the weapon they will use it to kill as many magical people as possible, perhaps annihilating Atlanta in the process

As magic lasts longer and technology frays and collapses The threat they poses unites all the magical people of Atlanta – witches, druids, the people of the dead, the shapeshifters, vohls, shamans – all unite to take down a threat that risks them all in an epic confrontation.

Against this background, Kate must also face major personal crises. Julie, her ward stands on the edge of death unless Kate can find the magic to save her – and more of Kate's past comes to light, destroying many of the illusions she held about her parents, revealing a much uglier truth


This story was epic on many levels. The magical people coming together for battle was already a legendary conflict and definitely up there on the epic meter. It was a fun exciting read, one of those books you not only can't put down (as my husband will tell you, at length, given my reading at 5:00am) but one you read while on the edge of your seat, holding your breath. In some ways the tension and the fear was ratcheted up further because the antagonists were human – simple, non-magical humans but with the capacity for so much hatred and destruction

It was also pretty visceral and dark. Kate and Curran are not soft and gentle people – and they have no mercy. They take no prisoners, they have no compunction about torturing people for information or sim,ply jkust for vengeance. There is an especially powerful and in your face scene where we see a widow who has just lost her husband and children to the Lighthouse Keepers. She's dazed and confused, sees that Curran and Kate have captured some of them and says “They killed my babies, My whole family is dead. I want a turn.” They agree – the prisoners are taken away and later we see the widow with blood stained hands – “She had her turn.” And there's never any apology for them being who and what they are – ruthless, dangerous and violent at need.

I love Kate and Curran's relationship. Love it love it love it and I never thought I'd say that about Urban Fantasy. The constant snarking, the biting, the fights, the arguments, the constant looking for a vulnerable spot to poke. Ahhhh true love – with a rattle snake.

I also love the many side characters and stories. Ascanio, Daniel, Andrea and Julie all have their own stories and personalities. There are some token walk on servants that have little role, but there are enough characters around Kate that actually have their own lives and goals that feel wonderfully fleshed out.

Grendel the attack poodle is funny and pack politics is fun and interesting even as Curran becomes disillusioned with it and disappointed with his pack mates. They just have to be mentioned.

I'm less sure about the plot lines surrounding Julie or Kate's parents. Both plots serve to provide angst and doubt in spades. However, the books themselves are not overly given to angst so these little additions are realistic and interesting and deep. My problem is that so many urban fantasy uses tragic pasts and doubts of self/lovers to give us a constant stream of angst and pain that I find it tiresome – so I hope it doesn't grow too much in this series.

There was a sort of comment on prejudice against magical beings and the “other” in this book. Now normally such comparisons annoy me a lot. Marginalsied people in the real world face prejudice because of hatred and bigotry – and it literally ruins lives. To compare that to prejudice against, say, vampires because they eat people is insulting, annoying and deeply appropriative. I don't like it. So I tensed up when I realised we were going there...

...And we didn't. Oh we had a wonderful statement on treatment of the “other”. We had statements on how people scapegoat the other for their own problems. We had statements on how there's always an other and how people use it to allay their own fears, failings and problems. We had a number of quite decent and thoughtfully laid out explorations of mindless fanaticism and persecution. But they never drew the comparisons or tapped into actual real world prejudice or implied they were the same. It was surprisingly well done, especially since it's so rarely done remotely well.

I really wish this series had more diversity. I love the series and it's one of my favourites, but it depresses me immensely that I have another favourite series that is, again, predominantly straight and white. There are some tokens flying around but they're very very clearly tokens.

Other than that – this book is truly epic and will forever enshrine this series as one of the best Urban Fantasy out there. Worth a read. Worth reading twice. Worth gilding, hanging on your wall and worshipping as the awesome book it is.