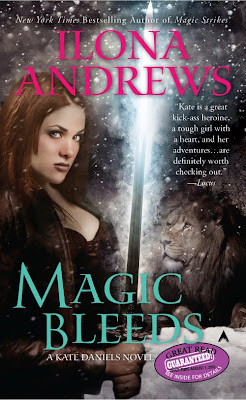 We have another new epic here. Oh yes we do. There's a new evil in town, a powerful ancient evil that spreads plague and destruction and death – that can make warriors run in terror, that can fight the greatest fighters in the city with ease and leaves a trail of magically sentient plague behind. Not even the best experts in the city knows who this threat is, not Saiman, not the People, not the Order – and it's already moved through several cities leaving a swath of destruction and death. And if that weren't enough – for Kate, this may be a family matter.

With a new epic bad guy in town Kate has to literally save Atlanta – and the pack. But she's also coming to more and more attention of the servants of Roland – the ancient and enormously powerful leader of the People of the Dead seeking to re-establish a new empire. He's looking for her and with every battle it becomes harder for her to hide.

And there's her rocky, tumultuous and explosive relationship with Curran – whether she wants to involve herself in the Pack, whether she can with her Order affiliation and, above all, whether she can deal with the demands Curran puts on her and whether he can tolerate her refusal to bend. And that's before you get to the inflexible and prejudiced Order that would deny humanity to the people she cares for the most

It's a lot to handle and, in many ways, an entirely new beginning for Kate. Epic battles, a new life and a whole lot of struggle.


I will start with a complaint. Kate and Curran both have differing versions of an event. Both of them believe the other acted in an extremely unreasonable, insulting (and totally out of character) manner. Naturally, being reasonable adults, they quickly realised something was amiss and sat down to talk sensibly about it, quickly discovering the error and correcting it.

HAH! Course they didn't! In fiction romances, no-one ever does that! No, instead they both sulked and pouted with each other, had blazing rows and refused to speak to each other for a good half the book. Oh the misunderstanding trope. Why Ms. Andrews, why? You're better than this! I hate this trope, I really do. You get a misunderstanding that would literally take 3 minutes to sort out but both characters instantly go off in a high dudgeon so you have convoluted, manufactured conflict. And in this book it's especially annoying – we've had 3 books where this relationship has built slowly and realistically with a lot of depth and detail (rather than the usual, clumsy, love at first woo-woo) and after all that wait and development we finally arrived! And then this. It's like someone painted a fine oil painting then decided to start finger painting on top.

Thank gods it only lasted for 30%. So there, there's my criticism. No, wait, there's a gay man on shit duty for the Boudas because he refuses to adopt a female role – and there still needs to be more POC.

There, I've done the criticism thing? Can I start squeeing and fawning in an unseemly manner now? Yes? Good.

Squeeeeeee! Oh this book was most certainly of the awesome.

There was so much about this book I loved. We got a lot more development of the story. The villain was truly set up as something epic, I've rarely seen a villain presented as defeatable and at the same time so utterly dangerous as Erras and her minions were. I lvoed the slow revelation of exactly what they were dealing with and just how powerful and dangerous that was. It also really brought home a lot of Kate's strength and power that she could stand up to such forces – and it was done in a way that made her look strong not them look weak.. It added immense amounts of power to the meta-plot. In some ways I think she made a mistake calling the villain Roland. I mean, Roland? Not menacing – but this was a book that really hammered home just how much of a threat Roland is, how immense he is, how legendary his power is and it did it very simply and elegantly – no sitting around with graphic scenes or long lectures to explain how scary he is – just a few parables and allusions to history and mythology that had massive impact.

I loved Kate's methods of dealing with shapeshifter politics (don't antagonise anyone? – oh yes, I laughed out loud. Kate demands their respect from day 1), I loved her refusal to break, I love that she kept her spikes out with Curran and their developing relationship I even loved Saiman's extremely insightful observations on what constitutes humanity – and how that contrasts with the Order's extremely narrow view of the subject. Curran's shapeshifter possessiveness is a classic and irritating “explained by the woowoo” abuse trope – but sadly it's very commonplace in the genre, but other than that and their original “misunderstanding” I actually liked this relationship, how it developed and how it was maintained

I also love the growing conflict with Andrea, it's not a major part of the story but what we see of it is elegantly done – her conflict between the imperfect Order that would reject her, and being a beastkin who the shapeshifters would also reject. The fact she has 2 conflicting loyalties and both sides would show her zero respect or loyalty themselves. It's nice that this side character who could so easily have become a person-less best friend instead has so much of her own story going on.

Did I mention that I loved this book? Because I do. If the original 3 books were crap (and they most certainly are not Magic Bites, Magic Burns and Magic Strikes are all awesome books) and you had to read them to get to this one? It'd be worth it. One of my favourites