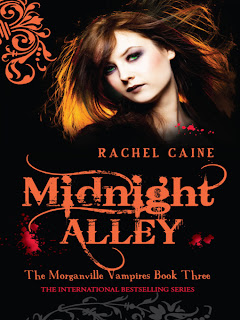 So let us begin, as I normally do, with a plot summary.... and I've deleted this a few times because my openers were a bit snarky – but the plot of this book was a problem to me.

Stuff happened. There are EVENTS. Random stuff happening, but they're not really linked as a plot. There's no coherent whole and, in some ways, Claire feels completely dropped into storylines that don't concern or involve her. There's a lot happening that doesn't advance the plot, storylines kind of limping along without going anywhere but above all, these events and plot lines are not linked. There's a tangle of stuff happening rather than a coherent plot.

The dominant story line is that Amelie, big Founder Vampire, to whom Claire has pledged herself (for some reason. Technically to protect her friends but the at the same time it's made clear that the protection doesn't extend to them) has ordered Claire to become the apprentice to Myrnin, an ancient and knowledgeable vampire. Myrnin is ill and Amelie wishes to preserve his knowledge as much as possible by using Claire's superbrain (I know I know, after reading Glass House and The Dead Girl's Dance it's bemusing to think Claire even has a brain, but remember she's supposed to be super smart). To further complicate things, the illness makes Myrnin violent, unpredictable, unstable and dangerous – and he's killed his 5 previous apprentices. Myrnin's illness is degenerative and, surprise, all the vampires have it! So it's only a matter of time before everyone dies – and it's Claire's job to continue his work and find a cure!

Apparently this is a bad thing. Since out of the hundreds of vamps in Morganville we've seen 2 who are worth a sunscreen.

But against that we have Monica sucking up to Claire to get information for Oliver. Even though any sane person would realise how impossible this is, the master vampire plotter thinks that Monica who pushed Claire down a flight of stairs, kidnapped her, beat her, poured acid on her and tried to get 3 men to drug and rape her, totally has a chance of becoming Claire's BFF. Claire, for some gods unknown reason, doesn't respond with “go die in fire you repellent haemorrhoid of a human being” and is both polite and offers tuition to Monica's side-kick.

At some point Monica gets pointlessly drugged and it's Claire's job to save her life (and Shane's saying “if you don't, you're keeping vampire secrets ahead of human life!” or maybe because she's quite happy for the woman who has made multiple attempts to kill her to drop dead?)

And Claire goes to another big raucous party because... because... actually I have no freaking idea why. She just does.

And Eve's brother Jason is around stabbing and killing teenaged girls but no-one seems to care. Every now and then another body pops up. But now he's fixated on Claire... why? Oh gods alone know why, we need another plot line that links into her for some reason. Anyway, in another event that advances not one inch of plot, Jason shoots Shane.

Oh and there's an anti-vampire vigilante group. Not the vampire slaying biker gang that appeared in The Dead Girl's Dance No, this is a different one. They even have an easily accessed newspaper (both Eve and Michael find copies). We've just never heard of them before. Oh and when the bikers were driving around murdering vampires they decided not to get involved. Anyway, they want to kill vampires – and to do this they kidnap Claire! Why? Because everything has to revolve around Claire in Morganville

Ugh as can probably guessed from the snark, I didn't like this book. The series has problems with everything revolving around Claire, it has problems with plot lines advancing without any reference to realism, logic or common sense and it has problems with Claire having all the common sense of logic of a concussed dodo – but this book took it further by losing any sense of coherent plot line. We have 3-4 threads lurking around, most of which probably shouldn't even involve Claire at all and they don't so much advance as randomly stutter up random events. In all, the storyline makes this book worse than the previous 2 instalments.

Characterwise, Claire managed to avoid doing anything too foolish for once. There were some questionable actions but since she was generally in a questionable situation it's not glaring. Shane's ongoing hatred of Michael is getting very old very fast. While it's reasonable to dislike vampires after living in Morganville, the fact he's been Michael's best friend all his life and now decides to hate him is just utterly unsympathetic. It doesn't help that Shane has a habit of being stroppy, aggressive, bad tempted, sulky and generally unpleasant - and he's presented as the primary love interes of Claire. It's hard to get behind that

Social justice wise we have a couple more POC lurking around the edges, but no more than bit characters. There are no GBLT characters. I also find the continuing violence against women – and the utter ignoring of it – as problematic. We've now had 2 scenes of date rape on campus and in both cases the protagonists feel that a “sorry we won't do it again” is sufficient to deal with this. Similarly, the sexual harassment, groping etc in the parties was seen more as funny and/or mildly irritating than anything. There are also teenaged women dying on a semi-regular basis and no-one seems to care. None of this is treated nearly as severely as it is and it feels very glossed over and disposable.

On the whole, this series is not getting better.