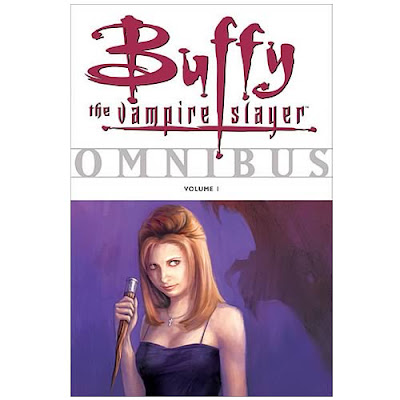 
The old Buffy the Vampire Slayer #1, and the story in DHP, are not in this volume. When we started work in early 1988, we set the stories in the then - current Season Two. These stories, set at the very start of Buffy's career came later. A few months into our initial run, Buffy novelist Chris Golden suggested adapting Joss's original film script - faithful adaptation as opposed to the tongue-in-cheek 1992 film. This led to Buffy: The Origin, reprinted here. Soon afterward, Golden proposed a Spike and Dru Comic, co-written with James Marsters, who (of course) played Spike on the show. There were to follow-up comics written out of chronological order, so this volume reprints the last of them, set long before Spike and Dru had ever heard of Sunnydale.

If you are feeling nostalgic for Buffy, and want something that feels new, this is the giveaway for you. This contest is open to Americans and Canadians.  All you have to do is follow us (not like) on Facebook (underneath the word networked blogs, there's a big blue button marked "follow"), Goodreads  or Google or Tumblr  If  you already follow us, on one of the aforementioned sites, simply send us a short to note to let us know that you would like to enter, and where you already follow us.  When you are done, leave your email address in the comment section of this post, along with where you have chosen to follow us, or send us an email at fangsforthefantasy (at) gmail (dot) com. Without contact information, your entry will be deemed invalid.  EVEN IF YOU SIGN UP BELOW WE STILL NEED YOUR CONTACT DETAILS IN THE COMMENTS OR BY EMAIL. This contest closes October 31, 2011. We allow only one entry per person. The winner will have 48 hours after being selected to contact us, or a new winner will be selected.  Good luck everyone and stay tuned for our next exciting give away.