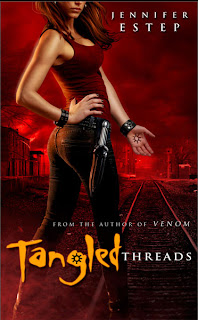 Gin's war against Mab is now declared and Mab is feeling the Spider's bite. First killing her lieutenant, Elliot Slater in Venom she has now started hitting Mab's operations around the cities. Her minions and dealers are all under threat, smoothly assassinated and the Spider rune left by their corpses.

Mab can't tolerate this any more and calls in LaFleur, her own assassin. An expert assassin of the Spider's calibre and an Electricity Elemental. She's in town to run Mab's operations – and take out the Spider. As a bonus prize, she's also to take out Bria, Gin's sister, to finally remove that thorn out of Mab's side as well. To complicate things, Mab has not missed Gin's friendship with Roslyn and is looking to spy on her and undermine her as much as possible

Gin faces an assassin of equal calibre to herself and with extremely powerful magic. Killing her is not just about another blow against Mab – this assassin is hunting her. And she has not only to protect herself, but also her sister and her growing circle of friends and loved ones.

And with that she needs to deal with Bria finally learning that Gin is her sister – and what the honest, law abiding police detective will do with the vigilante assassin? And can she accept her as her sister?.


I'm really liking the war between Mab and Gin. At last, after so long with them dancing around things, it was glad to see the knives out and Mab bleeding and the spider on the hunt. I really want to see more of this! More more more more!

Gin needs to start using her magic though. We've had book after book of foreshadowing about her vast cosmic power (insert megalomaniac laugh) and she's still not using it – sure she has reasons from her past not to rely on magic, but there's a difference between not relying on it and not using it at all – yes magic may fail but facing someone throwing lightning at you with just a knife seems... impractical. I can just see a conversation between Jo-Jo and Gin

Jo-Jo: You are the most power elemental in the city, darling! Use your power
Gin: stab stab stab*
Jo-Jo: No, darling, that's a knife. Look, she's throwing fireballs at you! Use magic back.
Gin: *throws knife*
Jo-Jo: Your magic! USE IT! USE IT!
Gin: *uses ice magic to make a knife. Stabs with it*
Jo-Jo: *elegant headdesking*

I'd hoped after she brought the ceiling down in Web of Lies we'd see more power. Enough foreshadowing!

Gin's relationship with Bria is touching and could develop very well – that tentative, worried wanting to know each other yet at the same time dealing with the fact that they are now strangers after so long apart. I am worried about how it will develop. On the one hand, despite the practicality she displayed in Venom, the honest and good police officer who believes in the law is not really going to jump up and down and say “oh my sister! ASSASSIN YAY! Let's hear it for some more murders!” and for her to do so would be unrealistic. Nor did she go the Caine route of deciding that Gin was completely, irredeemably evil and he'd arrest her if it weren't for those pesky erections he kept having around her (I didn't like his character much). She actually took a reasoned, balanced view and a very realistic view. She wants a relationship with her sister, has missed her and can't freeze her out, and she recognises that there is a reason why law doesn't really work in Ashland – but nor can she just hand wave the whole idea of her being an assassin with more victims than she can count.

So why be conflicted? Gin's self-esteem after Caine's “you're sooo evil but I want to shag you” routine was pretty badly hit (and reasonably so) and that has bled over a lot into her relationship with Owen as well. If Bria picks up the same criticisms as Caine did then we're in for a whole lot of Gin angst. Not that it wouldn't be justified, but I don't think it would be a fun read.

Onto the relationship with Owen. It's ok, I guess? I mean other than Gin's angst because of Caine there's none of the drama we see (and dread) from so many Urban Fantasy relationships – and the relationship itself doesn't bother me. But Owen... he's not objectionable but what is he? Other than liking Gin I can't really describe him, this character needs some meat on his bones.

I keep hoping Roslyn and Xavier will play a greater part as the incidental POC in the books, they're either victims or lurking in the background. But with the party I hope they're going to be more solidly part of the team, at least as much as the Devreaux sisters. Aside from anything else, they're interesting characters with their own stories and I'd like to see more of them (hey, they wouldn't be an awful spin off series).

This book left me hungry for more... but part of that is not just because it was fun, exciting and we were moving on, but also because we didn't cover as much as we did. The war against Mab was more a reaction than an action this book – Mab struck back and Gin slapped her down. We have the grand revelation with Bria but we didn't see it develop.

Also Estep needs to stop trying to make these books standalone. Far too much time was spent explaining things that have been covered in other books, I don't think there's a need to recap to this extent in book 4 of a series.

I liked the book, but I felt it was missing too much, I liked the story, the characters and the world but it felt held back, like we're not getting all we could out of it. I think the book was more foreshadowing of things to come than with set action and plot itself. I liked what plot was in there, but on the whole after the full book the meta-plot didn't feel especially advanced and new themes were introduced but not taken very far.