Review of Claimed by Shadow: Book 2 of the Cassandra Palmer series by Karen Chance 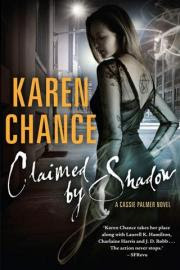