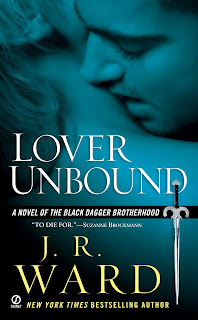 Lover Unbound is another instalment of the Black Dagger Brotherhood in their continuing quest to protect the vampire race from the lessening society and the Omega's goal to destroy them all..

Well, kinda. With the fore-lesser dead in Lover Revealed the lessening society is even less effective than it was before. And virtually absent in this book. You run into a couple now and then for random drive by murdering

But the Scribe Virgin is worried. The deity of the vampires is concerned that there remains only 5 Brothers to defend the entire race. In the past, the Brotherhood would mate with the Chosen, a select order of sequestered females dedicated to the Scribe Virgin, to produce more Chosen and Brothers, but that hasn't happened for centuries. The numbers of both are dwindling and without more warriors the Brotherhood, and the whole vampire species is doomed.

So she needs a new Primale – one of the Brotherhood to go among the children and begin having many many babies. And she chooses her actual son, Vishous, to be the prospective daddy.

But Vishous is not willing. Aside from his less than enthusiastic relationship with sex, he has kidnapped his own true love, his own mate (yes, kidnapped. We'll get to that) who he wants to be with, despite her being human. He also has to reconcile his long and tortured past with the knowledge that his mother, actual flesh and blood mother, was their species' deity and she did nothing to help him as he was tortured, mutilated and abused for decades.

This book focuses on the relationship more than any previous book I feel. While we have snippets from Phury and John but it's very much Vishous' story and the usual conflict and establishment of a mate that doesn't really need elaborating on. One part of it that has to be commented on is the kidnapping. Yes, kidnapping. Vishous is shot and the EMTs take him to a human hospital before the Brotherhood finds him. He is operated on by Jane, and while he's coming round, he sees her and his Dudebroness declares “mine”. He also starts fantasising about murdering the human man who is flirting with her (this is the very first time he's seen her but already other men may not go near his woman). So when Rhage, Phury and Butch come to get him out of the hospital, he insists on her being taken as well. And later he has sex with her while she's asleep (but don't worry, he smells her desire so it's totally ok). Jane, of course, falls in Twu Luv with her kidnapper (she muses for about 4 hours about Stockholm syndrome before discarding it and enjoying the loving) and they live happily ever after. Ish. There's a death and a resurrection and some ghosty stuff but I won't spoil.

So on the sideplots. John interests me and I wish I could see a lot more of him. He is inheriting more and more of Darius' skill and traits and he and Zsadist have a great vibe. It's interesting to see him come of age, as it were, and learn his place among vampire society and adapt to it. He's a more complex character, with a hard past and, perhaps an actual story. I would like his past explored more, but fear how the books would do it.

Now we move to Phury and, I have to say, get over it already man. Phury has this huge great martyrdom complex that is not only annoying but I'm not even sure its justified. He dedicated his life to rescuing Zsadist – and he did. Then he dedicated his life to being... sad that Zsadist was disturbed and unstable? For some reason this last caused him to swear himself to celibacy. No, I don't know why either. And then he dedicated his life to being sad because Zsadist was mated to the women he loved. He seems to have vast amounts of angst and grief (more than Zsadist or Butch or Vishous all of whom have had waay more shit to deal with than Phury) for very little reason. He's a drug addict constantly teetering on the edge of moving to harder substances, his every POV scene is filled with extreme self-pity and he's borderline suicidal... and there feels like so little reason for it. It actually really cheapened his “sacrifice” for Vishous because it felt far less a “I will help you brother” moment than it did a “I need another reason to be the whiniest of them all!”(Just like he did with Zsadist in Lover Awakened) It's like he's been set up to play the Noble Tortured One without any good REASON to be so convoluted justifications have to be invented for him..

On to the social justice fuckeries. First we continue the complete lack of any and all POC. We also continue with the endless homophobic and misogynist language

We also have yet another incidence of men raping men – this time at a warrior camp, the victors in sparring bouts rape the men they beat – yes showing greater “masculinity” through topping and sexually dominating and violating another man.

We also are reminded how grossly misogynist this vampire society is, though at least in this case the characters seem to realise this. The Chosen are allowed no individual agency or decision making, they're literally viewed as a collective entity, often not using their own names and their own desires are considered shameful. The Chosen to seal the mating, Cormia, has to be tied down to be displayed to Vishous because she is so terrified of him (something both Vishous and Phury recognise as so utterly wrong) and later restrained, gagged and hooded for the ritual mating (again, Phury refuses – thank ye gods).

I dislike how the Scribe Virgin ordering Vishous to have sex with 40 women when he expressly doesn't want to – and those 40 women similarly being forced whether they want to or not – is never addressed as rape or anything even remotely close to it until we reach the point where Cormia has to be physically restrained. Even if no-one had to be tied up, to be forced into sex is still rape.

Not much language to mock this time round, just attendhente (guess what that means) – but we do have a name. Hhurt. Hhurt? How is that even remotely pronounced? Is there even a language out there that has a double h? We also have Payne, which I think is breaking a pattern. Couldn't it at least be Paihn? I think I appreciate the language choices and silly names (that no-one questions! No-one! I mean, if someone came up to me and said “I'm Vishous, this is Rhage, Phury, Zsadist and Dhestroyer” I'd be in gigglefits!) because it stops these books from annoying me or boring me – I can laugh instead.