Once Upon a Time: Season One, Episode One: Pilot 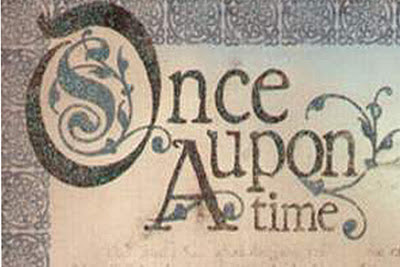 Okay, I know that this is a bit of a stretch but fairy tales are fantasy after all.  Sunday night was the ABC premier of Once Upon A Time staring,  Ginnifer Godwin, Jennifer Morrison,  and Robert Carlyle.  The story is based on the idea that fairy tale creatures are now living in the modern world but are unaware that they are fairy tale characters thanks to a spell by the wicked witch.

The story begins with Snow White and the handsome Prince Charming.  As we all know, Snow White was presumed dead and the seven dwarfs were mourning her when Prince Charming rode in and saved the say by giving her a true love's kiss.  At their wedding, the evil queen shows up to make them a promise, "everything you love will be taken from you forever. Out of your suffering will rise my victory. I shall destroy you happiness if it's the last thing that I do".

The scene flashes to the real world where Emma Swan, Snow White's daughter is capturing a man who ran out on his bail.  When she returns home, she is met by Henry Mills, a little boy who claims to be her son.  It seems that Emma gave him up for adoption 10 years ago and he has come to find her because he believes that she is the key to changing the small town that he is from. When they arrive in the town of Storyville, she meets Henry's psychiatrist, and he informs her that the man is actually Jiminy Cricket.  She is resistant, but returns him home to his stepmother.  On the way out of town she hits a deer in the middle of the road and is arrested for drunk driving.

In the morning she learns that Henry has run away from home again and so she visits his school with Regina AKA the evil queen and meets Mary Margaret Blancahard AKA Snow White for the first time.  Mary tells Emma that she gave Henry the book because he was having a difficult time and she beleives that he needed something positive to believe in. After Regina walks out in frustration, Emma learns that Mary does indeed know where Henry is.
When she finally find Henry at his castle, Henry once again tells her how miserable she is and that he believes that his adopted mother Regina does not love him.  Emma tells Henry about the fact that she was left on the side of the road and that her parents didn't even love her enough to take her to a hospital but Henry tells her that they helped her escape the curse and did what they did to give her, her best chance in life and this is why he understands that she gave him up for adoption.  At this point it is clear that she is touched by Henry and so when she takes him home and Regina turns vicious and tells her that she is to have nothing to do with Henry any further, Emma takes the opportunity to ask if she loves Henry.  Though Regina answers in the affirmative, it is clear that she does not.

In the fairytale world we learn that Snow White is desperately afraid of the the wicked queen's promise. When Prince Charming tries to push aside her fears, she reminds him that the queen had her poisoned.  Finally, they decide to consult Rumpelstiltskin who is imprisoned in the palace.  Prince Charming reminds Snow White that Rumpelstiltskin is not to be trusted but she is desperate to avoid a disaster.  Rumpelstiltskin tells Snow White that they will be in a prison where everything they hold dear and love will be ripped from them and that they will suffer for all eternity.  He says that there will be no happy endings. Rumpelstiltskin tells Snow White that she must get the child to safety and that on its 28th birthday that the child will return and find her, but most importantly the return of the child will bring about the beginning of the final battle.

Prince Charming wants to fight the queen but Jiminy Cricket says that giving into one's bad side never solves anything.  Snow White wants to give up because she is firm in the belief that the future is written and that good can loose but Prince Charming tells her that if she believes in the curse, then she has to believe that their child will save them. A Fairy appears them and tells them to fashion an enchanted tree into a vessel but unfortunately it can only protect one person.

On the say that Snow White goes into labour with the child, the curse descends upon the world.  Prince Charming quickly places the child in the vessel, but not before he is stabbed by one of the Queen's minions.  When Snow White arrives she tries to kiss Charming to bring him back to life but alas it is to no avail.  When the Queen arrives she tells Snow White that she cannot stop the curse and soon she will forget that Charming even exists.

That is basically the gist of the first episode. So far it seems be based upon the fairytale that we are all familiar with but the the creators of the show, Edward Kitsis and Adam Horowitz who are famous for their work on the now defunct Lost, tell us that we can expect so much more.

There will be equal time spent in both worlds.


* The first few episodes will center on Snow and Charming Show, but it won’t always be that way.

One of the concerns about making the series purely centered on the romantic tale between Snow (Ginnifer Goodwin) and Charming (Josh Dallas), said Pearlman, was that they wouldn’t be able to tell stories about other classic characters. “We’re really trying to go to a lot of different places and tie the stories back to our main characters,” he said. “If you look at the pilot, it suggests the story is about Snow and Charming and their life and Emma’s life on the Storybrook side, and we’re absolutely following and tracking those stories throughout the series. But I think [we wanted] to be able to branch out.” Cinderella and Hansel and Gretel are among the characters viewers will be seeing in the first batch of episodes. “We didn’t want to fall into the trap of some shows that have gone before us, that shall remain nameless — [coughs] FlashForward. They were so heavily into mythology that you can’t get out of it,” he said. (source)

My largest worry with these stories is that they are European centric which leaves little room to introduce characters of color.  We already have enough all White shows airing in prime time.  Of course there is also the issue of an all cis/straight cast as well. This show airs at 8PM which is during family viewing time, which makes it very unlikely that the creators will be willing to push the envelop for full inclusion.  People get precious about fairy tales and fail to acknowledge who is erased because it affirms dominant narratives.  Finally, if we are going to be treated of week after week of women being saved by men, this might just be another installment of women are fragile creatures. I am going to give this show a shot; however, I am doing so with my eyes wide open.