Feast of Fools by Rachel Caine, Book 4 of the Morganville Vampires series 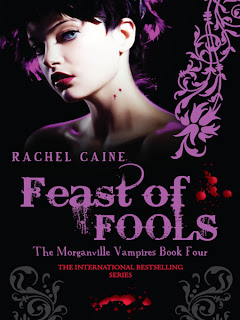 In the last book we were left with a cliffhanger. The Bishop, Amelie's father has come to town – and so has Claire's parents. The Bishop is dangerous, threatening and powerful...

And we open the book basically in the same situation. Big threatening bad guy and Claire's parents hanging round. And then we enter a holding pattern. I said the same thing about Midnight Alley and, sadly, I have to say it again, there's very little plot to review.

There are events. Claire spends a long time worrying about the big bad vampires, worrying about her dad, worrying about Shane, worrying about Myrnin in his cage, worrying about, well just about everything. But nothing actually happens. No plot moves forwards, nothing is advanced. There are events – but even less of them than there were in the last book. Claire goes to university, Claire drinks coffee. Claire's relationship with Shane continues (without developing), Claire keeps studying the vampire disease, Eve's brother Jason hangs around and is creepy. Eve's father dies and they go to the funeral. Shane and Claire go to the blood bank and give blood. Michael plays the guitar at Common Grounds and is good at it

I hate to present a long paragraph with just random bitten out events but that's pretty much the book.. Even in Midnight Alley there were more events to reference, but not here. I wouldn't mind if the events were good for foreshadowing or character development or world building, but even then there were too many of them without plot scenes interspaced - but most of them don't seem to add anything. They feel like filler scenes - and most of the book is like that. Worse, all of the foreshadowing of the Big Bad is told and told and told and told and never shown, it's vexing.

And it continues like this until we get to nearly 90% - and that is when the bad guys make their move, there is a great big showdown and the powerful, dramatic aftermath and hints of a long time campaign to come. Bishop makes his move, Amelie responds and fights back, lines are drawn, humans and vampires come together it looks like a rocking battle and a truly great story will begin here, filled with tension and reluctant alliances and fights for the whole town... except it started at 90%. It's really sad because she could have put this at the beginning of the book and gone on from there and actually had a fascinating plot. At least I have some hope for the next book

And to add that the missing gaps where the plot should be are filled in with teen angst. Shane is forced to attend the Big Party by one of the Bad Vamps and Claire is jealous. Shane is upset because said vamp uses her power to make him horny. Michael invites Monica (the evil Mean Girl) to the Big Party which makes Eve jealous and furious (of course, people could have wondered WHY Michael would invite their worst enemy but that would mean less drama. It's more fun to slam doors and sob piteously into pillows). The powerful, bad vampires do lots of scary posturing to prove they're powerful and bad but not really advancing from the beginning.

I have to say, yet again, how frustrated I am by Claire. Claire is supposed to be a genius. She is going to university at 16, she is taking advanced courses at the university because she's just too brainy for the simple, basic stuff. She apparently not only has a brain, but it's a super-duper brain that would make Stephen Hawkings gasp in awe.

And yet she repeatedly does things that make me gape and rage at their utter foolishness. In this book, while Amelie is dealing with the Big Bad Visitors, Claire decides to summon her to question her about her friend's relationships – this is the queen of the vampires here and she's nagging her about teenaged love affairs? Then she decides that Amelie must bring her to the Big Bad Party because... I have no idea, but she simply must go. Amelie says no and to keep her nose out of the whole thing. So she goes and visits Myrnin and talks to HIM about it, then, again, speaks to Amelie about how she discussed the private business she was told to keep out of with Myrnin. Honestly, she continually nags Amelie in this book like a whiny child. Then she goes and has a nice conversation with Oliver (local bad vamp who hates her) just because (and spends an inordinate amount of time going to Common Grounds despite vowing never to go back).

Everyone tells Claire not to go out on the day of the Big Party. The police, her friends, Amelie, Oliver – stay away, stay away! She even looks out on the day and sees everyone hiding. So what does she do? Goes out of course! But hey, it's ok, she brings a breadknife. Yes, a breadknife. You better be scared oh minions of the undead, Claire is totally ready to make you a sandwich!

I will read the next book and I will even hold out hope for it since there was a lot of foreshadowing here. But Claire's unending Spunky Agency and, above all, the complete lack of plot in this book and Midnight Alley is making these books a difficult read.