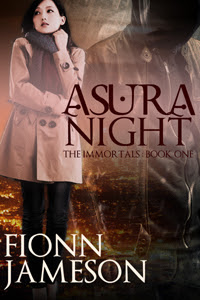 When Emi Tsukijima is attacked by a serial killer and survives, her whole life as a successful business woman is disrupted. The trauma consumes her, fear makes it nearly impossible to do her job and, below that is the terrible knowledge that humans are not alone. That there’s something dark and terrible on the streets that hunts them

After that, the emotional impact of knowing her presumed dead ex-boyfriend is hunting them is just an extra blow to her fragile realisation.

She begins as a very normal woman with very mundane problems. Her job, her love life and her romantic plans being dashed rather terribly

Then the supernatural hits and we get the devastating impact of her victimisation, her desperate fight for her life and being thrust into a world she doesn’t understand, facing monsters she never knew existed and trying desperately to hold her world together. She is damaged, she is hurt, she is afraid and she cannot return to normality

She has the excellent emotional impact of discovering and old lover is a hunter and the incredible pain that was caused by him leaving her life and his family’s life. It’s an extremely heartbreaking scene as she describes the pain he has caused.

But from that we also see Emi progress, find her strength, find her determination, her honour, her courage. We see her fight and sacrifice because she simply can’t expect less of herself. She cannot stand to be the person she would be if she didn’t. We definitely see her rise up from the ashes to an extent that impresses even the monsters

Ok so everything I’ve written up there is practically screaming “but”. So let’s hit that but.

This book is, like so many others, twice as long as it needs to be. And it is that long because we have pages and pages and pages and pages of Emi’s emotional journey. There’s a section of the book where Emi and several strangers are trapped in a cage while Emi despairs and fears about being killed and worries about who will be next

This goes on for what feels like 20 or more pages. A lot more. She spends pages upon pages of chasing her thoughts around, arguing with her fellow captives and generally nothing happening

Every scene is like this. We get some brief (well written, exciting acton), Emi’s reaction to that action (not well, written, frequently separated.
With Dramatic
Short sentences
Like this for impact
But it’s annoying
And achieves little)
And then pages and pages of Emi’s emotional reaction to said action. It’s slow. It’s dull. And yes I now know Emi incredibly well. And yes I know Emi’s emotional palette and understand all her reactions. And yes I can see how she’s being built as a hero. And I love that. But there’s too much. The book is boring with it, it’s slow. It’s like a delicate cupcake with some really lovely sweet icing that is just caked on so thick it can give you diabetes just looking at it and is just so sickly you can’t even finish it.

I think it also forces so much else out of the book – the world building for example. Beyond a horrendous info dump at the end of the book, I have very little idea of what the demons are beyond Demons. We have Demons and we have Hunters. No real idea of any capabilities of either. They just are. Now back to another painfully long Emi emotional introspection! YAY!

On diversity… I’m going to say representation more than inclusion. This book is set in Tokyo and every character except one briefly appearing White guy is Japanese. The book is overwhelmingly full of POC. In terms of accuracy of interpretation, I’m going to put this down to out of my hands – there are references I recognise as Japanese and there are very few moments: from food to references, to culture – where I am not aware of Emi’s nationality (and though there are moments, I don’t know how much of that is down to inaccuracy or simply because Tokyo has considerable enough western influences for it to be accurate). I simply am not knowledgeable about this enough to comment.

Emi isn’t exactly the most pro-active female character, but she is brave, she does grow and her quite heroism towards others is meaningful, even if it is based in sacrifice. We see similar from other women and at least one seriously dangerous and skilled female hunter who just needed more presence.

There is one briefly appearing gay man in the book, at the beginning. And it’s a trainwreck. He is the man Emi has decided she will marry and she is BEREFT that he is gay. She is so utterly desperate, in denial and beyond pathetic about this – so much so that if I were that man I would SPRINT for the hills to avoid her almost terrifying neediness of him. It’s creepy, destroyed any respect I had for Emi in the opening pages and used a gay man as basically a tool in her emotional monologue.

On the whole I liked this book – but the writing, the emotional trenches and the lack of development of much of the story was beyond frustrating. Why spend so much time on Naoki and the emotions he causes in Emi if he doesn’t become a relevant character? Why spend so much time dwelling on things if we’re not going to go anywhere. This story doesn’t move, it wallows – which makes it hard work.