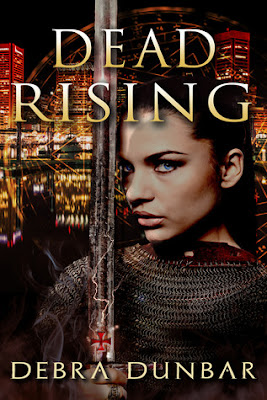 Aria is a Templar, she was born a Templar to a Templar family. She was trained to be a Templar – but when the time came, she didn’t not take the Oath. Despite her mother’s nagging. Despite living in poverty and no work skills, she refuses to take that Oath and accept the comfortable life that comes with it

But as a Templar she is still consulted by the local vampires who want expertise in deciphering a magical symbol – an exposing a deadly and complicated feud in the process.

One of the storyline elements I most loved was the central question “what have the Templars become?”

The concept has a lot of really nice nuance on it – and a really interesting moral quandary and debate with no simple answers and lots of different facets.

On the one hand, we have the utter passivity of the Templars, their lack of interference, how they’ve become rather irrelevant in the modern world (even if they are still a deeply feared power) and how they general live lives of extreme wealth and comfort while giving nothing back. This is wonderfully part of Aria‘s own refusal to take the Oath, while still claiming identity with the Templars themselves. She believes in them, but isn’t comfortable with what they’ve become.

The flip side is, we have the Templar’s own genocidal history. We have a history that shows the Templars judging, picking sides, declaring various beings evil and generally not being proud of that. The debate is whether they don’t act because few things are that simplistic (especially in a multi-faith world, exactly who are the “pilgrims” on WHAT “path” that need protecting) or whether that’s an excuse for the passivity?

This all feeds into the main plot line of the vampires and their attacker… and how it’s so very very difficult to say which side is right. Or, rather, they’re both right. And wrong. It’s complicated and neither side especially has the moral high ground.

It’s also pretty nice to have a protagonist with a big shiny sword and shiny powers who, in turn, cannot just nuke the enemy until victory is achieved.

All this level of nuance also comes to Aria and her family. Obviously there’s a rift with her turning her back (kind of) on the family business – but equally there’s an immense amount of love there. It’s layers and it’s wonderful.

There are other strong women in the story but not necessarily in huge roles (her mother is an especially complex and strong relationship). There’s also some interesting comments from her regarding Leonora, the female leader of the vampires and how she’d love to back and celebrate a powerful female leader- but isn’t going to excuse Leonora because of that or overlook her huge flaws.

I also really like the depiction of Aria’s poverty. A lot of characters in this genre claim poverty – but it’s just that, a claim. They tell us they’re poor, it may even be a useful character tool to make them take a mission they otherwise wouldn’t. But they don’t live as if they’re poor. We see little budgeting, we see little struggle or worry. While Aria worries about her back rent, worries about meeting in a café because she can’t afford anything in it, she worries about transport, she worries about getting a decent meal. She worries about missing work and frequently goes without sleep to work and complete the mission. It feels real, it is not just a powerful motivator but also informs her character a great deal.

This comes together into a story which has an excellent main character, a plot line that is wonderfully complicated with no simple answers and lots of difficult webs to navigate and a world setting that manages to be original and interesting with a whole lot of potential. There’s hints of this world being interesting and huge but the author has resisted the urge to include ALL OF IT in this one book. Hints of more, but we’re focused on one storyline that gets all the attention it deserves.

We also have Dario – a Black man, major second character, potential love interest and general awesome vampire. A mix of compassion and ruthlessness, giving us a really interesting and different view of vampire territorialness and violence and generally being such an excellent and really perfect character (without being utterly pedestalled).

I do have to say I hate the whole idea of hunger driving him to be sexual and predatory. But, equally, he recognises this as an inexcusable lack of control and while Aria finds him to be made of pure hotness she never loses sight of the consequences of acting on that hotness – nor does she accept vampire-based-aggression as excusable or a good thing.

We have another Black character with Russell, who comes with his own set of moral complexity, power, strength, life and goals as well as a powerful dedication to his family which makes him another interesting character whose story didn’t end the way I expected

We also have several other minor POC characters, including a “blood slave” who may be gay (or may just like being snacked on). I think it’s the former but it’s pretty minor and negligible as far as inclusion goes. There’s also a briefly appearing female Black vampire who in passing lets Aria knows she likes men and women… again, it’s pretty vanishly small to the plot.

I picked up this book on a random whim – and I think I’ve found a series I’m going to love. Stumbling across a gem is priceless and doesn’t happen nearly often enough