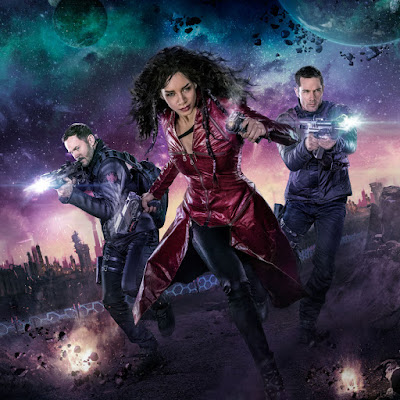 Killjoys is back! Yes I am doing my happy dance. This was definitely one of my favourite shows last year – on the scale of my losing all objectively and merrily judging anyone who didn’t love it (since they clearly have no souls). Which means I enter this season with trepidation – will it live up to its billing?

Last season ended with a huge about of Old Town on Westerley being bombed and D’avin kidnapped by Khylen for nefarious purposes (these involve dreams, green goo and odd experiments). Leaving Dutch and John to find D’avin and get him back (and maybe stab Khylen a few times in the face, because that’s kind of always a goal for Dutch).

He’s been kept on the forbidden scary planet of Arkhen, a planet which is fully shielded and not easy to land on so requires many steps to get there – especially when Dutch decides to try and land on the planet anyway and Lucy has to stop them.

So, step 1 – they hear about a criminal gang that has managed to elude capture by hiding on the planet – ergo has some means of surviving its shield. To Bellus, the awesome and snarky contract manager for Dutch who gets her a warrant for the people who own this tech – and a lead on where this tech is

Step 2 is Eulogy, a planet which is a big criminal gambling den. They don’t even let you in unless you have a criminal record which just confuses me. The Company has shown itself willing to bomb entire cities if they’re not perfectly obedient – well you have a whole place here which literally has a “dangerous criminals only” admission policy – why hasn’t it being nuked?

Thankfully Pree has a shady criminal past and is apparently tagging along with the gang. He and John play couple for lots of snarking and, yes, I laughed when it turned out the whole room of dangerous criminals would tolerate a lot but hell no do you talk shit about someone’s mother!

Dutch does find the technology – embedded in a cyborg called Clara who also has a prosthetic arm with a biiiiiiig gun attached. She has a tragic past – the gang bought her and had a place called the Factory put a whole load of experimental mods in her. She’s 26% machine which isn’t legal in the Quad – in fact the Company doesn’t even recogniser her as a human being.

She’s also a whole lot of fun and I really hope we’ll see her again. I think so because she and John definitely connected

Using the shield hurts her – and John is certainly unwilling to risk her health any further, even for his brother. He develops a full on saviour complex for her in fact, wanting to get their friendly doctor to remove her mods. But Clara continues to be interesting – choosing to help them a) because she owes them and b) because she sympathises with Dutch and how she has been used by Khylen in the same way she was abused by the gang. She also values the ability to make the choice and help them – rather than have someone make that choice for her

On top of that, despite the health issues, she doesn’t want her cybernetics removed. They are part of her, she keeps them because they are her and she doesn’t want someone else removing them, someone else making that choice for her. I like her a lot – definitely want to see more. There’s a lot of potential there with her story, her relationship with John (him wanting to save, her not accepting she needs saving), her lack of legal personhood - and she has a giant gun on her arm. It’s all awesome

Also they don’t have to fulfil the warrant on her because of the Company law. After all the warrant is for people who have/took the tech and Clara isn’t, legally, a person.

Inside the prison, meanwhile, experiments on D’avin to turn him into a level 6 doesn’t seem to be going well. He’s experiencing all the dreams and visions (apparently memories) but their green goo is not doing whatever it’s supposed to do (part of that involves making level 6’s nearly immortal judging by the way you can shoot Khylen and him treat it as a minor inconvenience). In fact, D’avin has the power to drive away the immortality goo with his mind… or so it seems

His super power is the ability not to become a super soldier. Personally I’d have held out for mind reading or something. It’s definitely from the bottom of the X-man box, really. But Khylen is impressed – so impressed he’s willing to murder a whole bunch of his own minions to rescue D’avin

In doing so we see a little more of Khylen and his motives. Looks like he’s not totally in charge of level 6 and his plan all along was to do her best to protect Dutch as her mentor… which became totally awkward when she decided she wanted to stab him in the face. He wanted to make D’avin into a level 6 and then send him back to Dutch to be a bodyguard/spy before he turned out to be all level 6-proof.

He gets him out before the ominous Black Root (Root? Route? Since they’re American I’m going to guess Root) arrive, though he reminds D’avin, yet again that his dreams (of people fighting, green goo, plants et al) are all memories.

D’avin escapes – and Khylen is taken prisoner by his own minions (respectfully). When Dutch arrives for him they also find Fancy who they rescue. Everyone rushes back to Lucy and D’avin shoots Fancy.

He heals – yup Fancy’s level 6. They kick him off the ship and he heads back to Khylen, killing the people guarding him. I’m going to guess he’s on Khylen’s side and Khylen has his own little following

D’avin tries to tell all this to Dutch who isn’t entirely ready to embrace the whole “Khylen is your friend!” party line, she’s still very much on a face-stabbing policy. But she did leave despite knowing Khylen is there because keep D’avin and John safe matter more to her than her vengeance against Khylen. Her priorities have shifted, taking down Khylen is no longer the be all and end all.

Extra twist – in D’avins hallucination memories h saw Dutch, fighting. This was apparently a memory from long long ago… so is Dutch immortal? Reincarnated? Cloned? Time Traveller? All of the above?

Well that’s a whole lot more plotting and storylines – a huuuge amount to explore this season. I think I’m not going to be disappointed

But, look, can we talk about Pree? I’m glad to see him more involved than just being the bar man. Also him and John pretending to be a couple is the closest we’ve has to him being overtly labelled as go rather than relying on a shit load of stereotypical gay coding.

Yet his entire role appears to be to provide sassy quips and comic relief. And don’t get me wrong, he’s freaking hilarious, repeatedly and overly, but this is a trope. An endless, repeated trope where we have the token gay guy, without any real storyline, there to provide us with hilarious sassy quips.

I’m not even sure why he is here? Does he care about D’avin? Does he have a connection to D’avin?