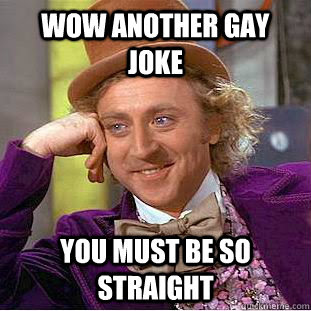 I am considering a new career as a comedian.

Of course, it’s a highly stressful career involving a lot of work and preparation, razor wit and perfect timing. I have to constantly come up with new material, work meticulously for hours on my pacing; be ready for witty improvisations. It’s a lot of work

Or I can just stand up in front of an audience and say “Look! GAY!” That’s funny right?
See, I’ve never particularly got the joke. I’ve never quite understood why a man who finds another man sexually and romantically attractive is more hilarious than Antonin Scalia’s legal arguments. But apparently I’m in a distinct minority and so many people find the mere presence of gay men to be so damn hilarious that I’m sure an illustrious career in comedy awaits me. Deck me in a rainbow and get me on the stage, I’ll make a fortune.

The ridiculous notion of me on stage aside, it remains that gay man as comic relief is a pervasive trope in both media in general as well as the genre; you need some light comic relief? Get a gay man on that screen!
Sometimes it’s the sassy gay friend with lots of quips and outrageous lines. Make them funny, make them witty, push the mannerisms to the hilt, max out the cattiness, go on, drop the odd “fabulous in there” and work it honey, because you’ve got a recipe for a laughter riot. Bonus if you can make them sexually obsessed - get them flirting, get them dropping innuendo every other work, get them checking out every man within a 10 mile radius (but never actually getting any on camera, c’mon you want the straight folk to be amused by their display, not assaulting their poor straight eyes).

True Blood’s Lafayette is the absolute master of the gay comic relief. he comes on screen and we all lean forward waiting for some gem of a line, preferably coupled with outrageous clothes, a finger snap, a head twirl and a “girl/boyfriend.” A sex worker who we never see have sex in a show that’s hardly prudish about sexual depictions, a man who really works those stereotypes; Lafayette is truly the master of this role, the lord of sassy, working those stereotypes to the hilt while being a good GBF to his straight friends

That’s a high standard of gay comic relief right there, but he can’t rest on his laurels and be safe on that pinnacle. Orphan Black’s Felix is a grade A GBF, ticking so many of the boxes (and drawing laughs with his awful thong). His life revolves around his straight compatriots, nearly everything he does is to lampoon or draw attention to him being gay (pretty much the sum total of the character). He’s a sex worker (again), but we never actually see him have sex (of course) and, yes, it’s on a show that is certainly not prudish about sexual depictions. He works the stereotypes to the hilt and has a steady patter of comments for our amusement (in between looking for his gay clothes, being a gay friend and being a gay barman. Yes, really, his sexuality was referred to in relation to all these things as some kind of novelty). In fact, he and Lafayette have such similar schtick that they both have hilarious scenes where they have small children dress up outrageously. Well, when you’re working with a limited set of stereotypes it’s hard to be original.

Alas, lagging behind is Aaron in Switch. Not getting enough screen time to be a true GBF, his every comment revolved around sex and how hot he found men and as a foil in the service of Jude. Of course, he never got any, despite being his overwhelming sex obsession allowing him to be a constant source of amusement - Switch is considerably less explicit than True Blood and Orphan Black but it certainly had no trouble with the characters having sex; but not Aaron.

But Aaron is a different form of comic relief - at least Lafayette and Felix get to be active sassy toys, jesters who work to amuse us with their stereotypes and sharp tongues. Aaron isn’t a jester, he’s a clown; he doesn’t work to amuse us, we’re expected to laugh at him and his pretty pathetic behaviour, he is a figure of mockery which is another major source of gay comic relief on our shows


But having recurring gay characters just to mock them seems like a lot of work, so most shows don’t bother - it’s easier to drop in some bit part gay men for an episode or 2 for everyone to point and laugh at, then you don’t need to make even the most token attempt to develop them.. Lost Girl, which has it’s ups and downs but generally strong bisexual and lesbian women, is not above having cameo appearances by gay men to be the butt of some quick jokes, camping it up for some cheap laughs. Supernatural has great fun throwing in gay men for random hilarity - from the Ghost facers in season 3, to the Winchester cosplayers in season 5, Supernatural’s writers are happy to keep gay men in the laughable, mockable, pathetic comic relief box. Teen Wolf has Danny lurking in the background and, when not filling the role as servant to the straight characters, or barely seen Maris, he does his duty as comic relief. Whether it’s Scott dancing with him (and making a joke out of something that has had gay kids kicked out of proms across the US), or jokes about Jackson and his webcam or Stiles making sex jokes with him, repeatedly, or the scene with the shirtless Derek - they’re all played for laughs and they probably make up the majority of his presence on screen. In fact, I don’t think there’s any “probably” about it, most of the time when Danny’s on screen we’re supposed to laugh - and the joke is inevitably related to his sexuality.

Of course, not wanting to bother with even these tokens doesn’t mean a TV writer needs to abstain from the gay jokes! Far from it, because there are few things on TV considered more hilarious than suggesting or outright calling straight men gay; whether it’s straight men being mocked for fitting gay stereotypes or 2 straight friends or brothers put in the awkward position to defend their straightness, or simply putting a straight man around gay folks or in a “gay situation” it’s a staple comedy. On Supernatural, how many times has Sam and Dean been assumed to be partners (and yes, played as a joke)? Or we’ve seen Dean’s extreme discomfort when around gay men. In Teen Wolf we have Stiles fake coming out to his father (and being disbelieved because of his dress sense), or him being able to rustle up some random drag queens. Misfits lines up so many gay jokes that I’m not even going to begin to count them all since it’s utterly incessant between powers used to make Nathan fall in love with Simon and an endless list of gay insults. At least next to Misfits, Almighty Johnsons and the “gayest god ever” “could this god be more gay” jokes seem quite minor in comparison.

So popular is the gay joke even with an all straight cast that Save Me had an episode where the entire expanded cast lined up to tell grossly stereotyped gay jokes over and over again.

I feel like I’m belaboring the point with endless examples here, but it just strikes me how common it is and, really, I’ve been restrained - because Being Human US, Being Human UK, American Horror Story, and certainly Game of Thrones (does Loras have another point other than to be the butt of people’s jokes?) have all indulged as well. It’s actually rare for a show not to have a gay joke at some point especially if they have a gay character - and then they’re often like In the Flesh, too wedded to utter tragedy to have any space for humour.

While the gay joke and the gay comic relief does tend to be something that dogs gay/bi men more than women - lesbians and bisexual women are hardly immune to this trope. Despite starting strong, Dark Angel’’s Original Cindy may very well be a female version of Lafayette (or he may be a male version of her since she came first), especially in the second series when she became less and less realised as a character. Ghostly Thelma on Hex does have more depth than most and be a very deep, fully created character (and she’s a character I love and adore), but she’s still the sassy lesbian best friend full of quips and snark; at least she serves as more than just a source of humour. Almighty Johnsons can barely mention Michelle/Sjofen without making some crack at her sexuality as the “goddess who goes both ways.”

The sad thing is, that even portrayals I really like - like Jinks in Warehouse 13, are still dogged by repeated gay jokes. Because even when trying to build a fully fleshed gay character we simply cannot abandon the role as comic relief; they always have to be a bit silly, always have to be a source of humour, gay sexuality can hardly ever be serious (without being tragic) or respected.

These are not new tropes. We’ve been playing the game of the hilarious gay folk since long before Lieutenant Gruber invited Renee to see his little tank or Mr. Humphries minced across the shop floor announcing he was free in the early 70s or even when “Julian and his friend Sandy” inundated us from the radio in the 60s; but 50 years on and we’re still seeing gay men used as the pathetic joke more often than we are seeing them be an actual full character in the shows we’re following. Inclusion isn’t served by reducing minorities to the butt of jokes, gay characters deserve to be more than a punchline and gay people deserve to be taken as seriously as straight folk and should be present on our screens without the “justification” of being funny. Gay people should be present as full, actualised characters, not tokens made up from a series os strung together “hilarious” stereotypes. At the moment we have far too much of the media that presents the very presence of gay people or gay sexuality as laughable, mockable and ridiculous; is it any wonder that gay people face such contempt and mockery with the television set to a the laugh track whenever they’re presented?