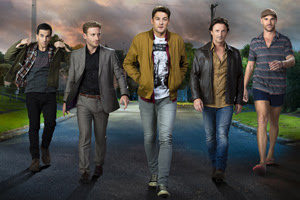 It’s back! Almighty Johnsons is back! After we thought it was cancelled, it returned to us, precious! It returned!

And Anders no longer has the horrible beardy thing! Things are looking up! He returns to a perfect fairtytale home where his pregnant wife, Gaia, awaits him – so happy and joyful and sweet. Apparently 5 years have passed – and Axl is very very pissed about Gaia and Anders – and is embedded in a tree.

Thankfully it’s not real, it’s Axl’s twisted imagination. Less thankfully, he snaps out of this because Gaia screams his name while he’s driving a car at speed on the wrong side of the road with another car coming in the opposite direction. After some very exciting spinning out of control, they come to a stop – alive and in one piece. But Axl just can’t live in a world with Gaia and Anders together. Gaia, always the sensible one, points out Anders is nowhere to be seen, she’s in Axl’s car, going to the house where they live together and she intends to spend the night in Axl’s bed. Gaia, awesome as always. Axl and Gaia kiss passionately. They continue to kiss all the way back home. They don’t stop kissing as he struggles to open the door, they don’t stop kissing as the go into his room at which point I think they do stop kissing by the moans, cries and panting that follows. It kind of ruins Zeb’s Frigg re-birth party.

Anders is at his own flat (with an odd hallucination of Gaia in his bathroom mirror) and does a really good job of being silently torn up about Helen’s (Idun) murder – her blood still staining his kitchen floor.

Ingrid (Snotra) gets thoroughly drunk and has to explain the whole hot mess to Ty. Mike (Ullr) complains bitterly about digging Helen’s makeshift grave, complaining that Anders should do it and being really dismissive of Ander’s grief. Olaf (Baldr) sort of helps but I think even he’s not impressed by Mike’s whining. Michele (Sjofn) and Stacy (Fulla) clear out Natalie’s (the murdering religious fanatic) room and Michele weighs up whether Gaia, as Idun, will be easier to deal with.

Returning to Anders, Mike chews him out for not cleaning up the blood in his kitchen (and Anders tries to invoke Mike’s Ullr abilities by suggesting burying a body is a “hiding game”. Nice try). Mike and Olaf also warn Anders off Gaia. Agreed there, but I still think people might find more sympathy for Anders. Even if he doesn’t actually encourage it.

Exhausted, Mike goes home to Michele and adds dodgy plumbing to his list of things to do. He wants to know why Colin (Loki) called Michele the most powerful goddess (she can make anyone infatuated with anyone else – sounds pretty powerful to me) but Michele pleads ignorance (possibly honestly). She wants to know if Mike still plans to kill Colin but given Colin’s ability to make nasty murdering god hunters explode, Mike’s backing up on that one.

Anders goes to work (in Jon Hamm trousers that, of course, I didn’t notice) and tells a very very scathing Dawn that Helen and Natalie are out of the picture – including the business they were supposed to be bringing (and also denying he ever had a beard – yes, let us pretend it never happened). Anders uses his Bragi powers to mojo Dawn – and, because it’s Almighty Johnsons, throw in a suggestion that Natalie and Helen have run off to have a lesbian affair. And has another Gaia hallucination.

Ty drops in to see Anders and asks Dawn out (who doesn’t remember him) – and I find myself agreeing with Anders again, too soon Ty! You’re being creepy. Just to remind us that Ty is the sweet one, Anders asks him lots of personal information about Helen to see if anyone’s going to come looking for her (no). Ty found all this out on one date while Anders, despite being with her for weeks, didn’t know any of it – they just had sex constantly. Anders continually ducks any questions about his feelings.

Back at Gaia and Axl’s, an apple tree has sprouted out of the sofa. Which rather freaks Zeb out since the landlord is coming to visit tomorrow. The perils of the new Idun. Time to call in Olaf and Ingrid to see what the holy apple tree means (they eat the apples, because they’re awesomely delicious. Apples all round (except Gaia who thinks it’s vaguely creepy) and I’m with Axl, it’s probably a bad idea of Zeb to eat them. Unfortunately, Anders isn’t the only one with hallucinations and Gaia sees Anders – she reacts with sexually suggestive finger sucking with Axl.

To Anders who quickly rescues Ty from another awful attempt to rush things with Dawn, following it up with awful advice and how Dawn thinks Ty’s gay because, yes, Almighty Johnsons, again. He confides in Ty about Gaia hallucinations and how much he doesn’t want Gaia – but Ty is no longer very sympathetic so time to talk to family oracle, Olaf; currently eating his bodyweight in apples.

To Mike’s bar to meet Olaf – unfortunately Axl, Zeb and Gaia also go to the bar for free drinks. After brief awkwardness, Anders aims for ultra awkwardness by telling Axl that he in no way wants to sleep with Gaia, no matter what the universe says. Nice thought but Gaia calls him out for talking about her as an object rather than a person who is right there. She adds that she has no interest in him, Axl threatens to punch Anders and Mike tells Anders to leave. Well, he tried.

Mike and Axl talk but Axl assures Mike all is well – and Gaia is nothing like Helen (who is dismissed as “skanky”) and Axl decides they’re both people and gods – and he and Gaia are sticking to the people side of things. And that night Axl gives Gaia a ring and asks her to marry him; she says yes.

Ty continues to stalk Dawn. And Michele is not happy at Mike’s… apartment. Ish. It’s well below her standards and she hates it – but Mike can’t afford to renovate. Michele points out he’s UIlr, god of games and has an infinite supply of cash if he uses it

Zeb panics about the landlord when Axl and Gaia give him the news – he questions whether Odin and Idun can be engaged but they jump on that – it’s Axl and Gaia, now make with the group hug celebrations! Ms. Kwon, the landlord’s daughter arrives to inspect the apartment – despite Gaia and Axl being half dressed and she marvels at the tininess of Gaia’s engagement ring diamond. They explain away the apple tree as an artwork that will be moved, elsewhere, honest – Ms. Kwon doesn’t care over much; but she does tell them the rent’s going up. That’s for Zeb to panic about while Axl and Gaia are still giddy.

Axl rings his brother to tell them – Anders trying to be happy but clearly not, Mike knowing automatically because Axl says “guess what?” therefore turning it into a game (that is such an easily abused power). Stacey’s fairly indifferent but both Olaf and Ingrid see it as bad news (being oracles). Ty’s the only one who is happy for them. Speaking of Ty, Anders gives good advice (about dating! AGAIN, yes good advice!) to Ty about how his stalking Dawn is creepy and disgusting and totally not sexy or romantic.

Michele continues to seduce Mike to the dark side; winning a free shopping spree in the DIY store. Which she then sabotages because she told him she loved him and he didn’t say it back.  Which turns into a game of hide and seek among the shelves – which Mike is, of course, freakishly good at.  He was hiding in the gardening section getting her flowers to prove he loves her (hah I quite like them as a couple) including roses “I saw prickly and thought of you.” And out of pity, Anders uses his mind control to send Dawn to Ty praising his creepy cupcakes and insisting he show her how he makes them. Ty guesses Anders is responsible and Dawn gets some flashbacks to when she nearly froze in Ty’s ice room; this freak her out and she leaves quickly.

To the bar for the celebratory engagement drinks. And oracles Ingrid and Olaf take Axl and Gaia aside to basically tell them their relationship is doomed and they know something’s not right – hence Axl growing the tree to try and create a symbol of them together, to hang onto what they don’t have and convince themselves it’s still real. Yes, Odin made the tree, not Idun; Idun’s apples are always green.

Axl goes home to the empty flat. Gaia goes to Anders – and they have sex while Axl cuts downt he apple tree.

Damn there’s some symbolism for you

The show has always been set up to present Ty as the good one – the sweet, considerate guy who, alas, never gets the girl while Anders is the bad one – the rogue, the bad boy, who nevertheless always gets the woman; this is clearly shown in the way Ty knows everything about Helen while Anders knew so little - but had constant sex with her.

But this whole thing just reeks of the “nice guy”. We’re supposed to feel sorry

And this is why I liked that it was ANDERS calling out Ty on his stalking behaviour (even if it was undermined by the mind control). Because Ty being the “nice guy” doesn’t entitle him to a relationship or sex, nor is getting to know a woman as a person “losing” compared to just having sex with no actual attachment or caring for her. And just because Ty is the nice guy doesn’t

I wonder if Almighty Johnsons, not known for its nuance, appreciates the subtleties of having Anders be the one to challenge Ty’s stalking – even while enabling it.

While Anders and Gaia ended up together, I’m glad that, after the initial rush of Idun, Gaia and Anders did fight it. We didn’t have a continuation of that awful kneeling to Anders from the last episode. No, we have 2 people trying to fight against a destiny woo-woo is forcing on them, still having their own personalities but not able to fight this. And it’s mutual – it isn’t Anders preying on Gaia, neither of them want this. And the whole thing with the tree – cutting it down, the wrong fruit, it being Axl’s was such a powerful and tragic scene

On the whole Almighty Johnsons is back – and that means there’s a lot of problematic elements, while at the same time the story, the concept and the characetrs are

And damn Anders can wear a suit