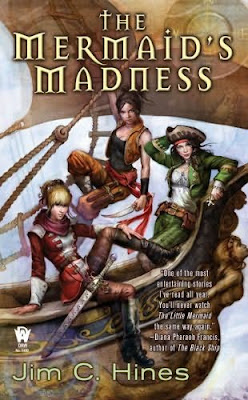 There is a new threat to the kingdom – the seas around the nation are becoming impassable due to rampaging mermaids and, worse, Queen Bea herself has been injured and lays dying. It falls to Princess Danielle, Snow and Talia to set out again, the only ones who can to try and save Bea’s life – and her very soul – and preserve not just the kingdom but all seafaring nations

But it’s a complex task and finding who the actual villain is proves more complex than previously imagined. It begs the question – even if the villain is the victim, can they afford to be merciful?

I do like how this series challenges a lot of assumptions about fairytales, a lot of the staples we’ve all grown up on that are, frankly, dubious to say the least. In this book we have a very strong challenge to the whole love-at-first sight trope that so dominates fairytales. Why should that prince you’ve barely met and hardly know turn out to be a nice guy? How can you be so sure of his affections after such a short time knowing him? Or that, occasionally, that guy you fall for turns out to be a brutal, manipulative, arsehole?

So when the Little Mermaid decides to give up her family, her people, everything for the sake of the love of a human she has known for a week – is it any surprise that it ends badly or one applies reality rather than fairytale rules? This story is a tragedy through and through because Lirea is, in many ways, a victim as much as she is a perpetrator. Ultimately, she was a very young woman who fell hard for the wrong man and was badly used by people who were older and wiser than her who sought to exploit her for their own ends. I like how this is even applied to Danielle’s own story – Talia pointing out just how lucky she was that Armand was a good man since they married after knowing each other for so little time. Danielle is presented as having made a very naïve, very silly decision that, luckily, worked out; this is even more stark when you consider that out of Snow White, Sleeping Beauty and The Little Mermaid, Cinderella is the only one who managed her Happily Ever After.

This book does a very good job of preserving that nuance, partly through the lens of Danielle’s near infinite compassion and the pleas of Lirea’s family, but also through the much harsher and more cynical gazes of Snow and Talia who recognise the real bad guy. At the same time, this doesn’t require anyone to be a saint or ruin the story with people being just so damn nice that you have to wipe the sugar off your tablet screen. While there’s sympathy for Lirea, there’s equally not much forgetting that she has killed people, she is threatening the nation and she has hurt Queen Bea. Compassion and acknowledgement of her victimhood does not translate into automatic forgiveness – certainly not from Talia, nor does it stop the 3 princesses from doing what they consider necessary to save Queen Bea. And if that means everyone doesn’t get a happy ending – well, so be it; not everyone’s promised one.

Even the behind-it-all villain is presented with a level of nuance. Ultimately her actions stem from the widely held belief that mermaids are lesser people; a belief they took to heart and sought a way to save themselves and their people from. No-one is just a villain, and even bad people have people who care about them.

I like Danielle as a character, I think she has grown a lot since the first book and in interesting ways. She was very naïve and apolitical and lost back then and has learned from her experiences. But here learning doesn’t mean becoming a super-jaded cynic as we so often see as a stand in for learning. She’s still good, she’s still ultimately caring – but she’s also gained a level of competence and understanding to leaven that goodness and caring. She brings compassion to the political agenda – confronting princes and kings with the fact that the disposable “red shirts” dying around them are people with families as well, appealing to common sense, to compassion, to mutual good while still being ready to lay down the law and put her foot down if necessary. And I really like how Talia makes her see not only the disadvantages of growing up poor and not understanding political matters, but also the advantage of not being a coddled princess and not having the expectation that everything should serve her, everything should suit her and that nothing bad can possibly happen to her.

I can also see Danielle stepping more into a leadership role for reasons beyond her rank, even though both Talia and Snow have abilities that far exceed hers.  Danielle counters their flaws, maintains hope in the face of Talia’s cynicism and focused on task when Talia is impetuous or Snow is easily distracted. She balances them well and completes the three of them despite having no obvious shiny skills to add to the pot.

On a world building front, love how the undine/mermaids have been created. They’re not just humans with fish tails, they’re a distinctly different species with not just a separate culture but an entirely separate biology. It’s an extra touch of world building I appreciate.

The story itself is generally good – it’s well paced with some decent twists and the nuance is maintained throughout. It’s not simplistic and the characters alone prevent it from being linear. I still can’t say it’s a plot line that enthrals me, but equally I have trouble saying exactly why it doesn’t. It’s a good storyline, it’s well written, the balance between description and keeping the story moving; it’s just not a story that would kill me if I couldn’t finish it.

We do have several strong female characters in this book – it’s kind of the focus of the book. But they’re all strong in different ways and in ways that go beyond their powers or skills. Talia is strong beyond her combat abilities – but also in her confidence and endurance. Snow is strong beyond her magic – she’s intelligent and educated and fun. They’re also not flawless – Talia is prone to despair and is deeply jaded, Danielle has crises of confidence, Snow is easily distracted and has bouts of almost cruelty in her disregard of people. I love how, while people are worried about their safety, absolutely no-one doubts their competence for a single second. There’s no suggestion that anyone could do it better, no suggestion that the prince and king should be going, no-one doubts that they’re quite capable of saving the day – they’ve proven themselves and they don’t have to repeat that just because they’re women

Talia is a woman of colour – and we see that reflected not just in her skin colour, she does have a different language a different culture and a different cuisine, all of which are referred to without making a complete obsessive fetish out of it. She’s also a lesbian to add further inclusion – though I do wish we’d see more of her affection than her unrequited pining for a straight woman that she finds so very very very distracting; especially now I wonder where the relationship goes from here.

In many ways I find myself in the same position at the end of this book as I found myself at the end of the last book. Every element is there. Everything I can point to and say “this is good, this is good.” I don’t have anything I can point to and say “that wasn’t done very well.” Because it was all done incredibly well – but if it were done incredibly well, shouldn’t I be giving it 4 fangs or more? But I’m not; because while I like the book, like it a lot (and definitely like it more than the first book), the story just didn’t consume me. It was a fun story, it was a good story, it was a story I’m happy I read and never bored me, but it didn’t leave me feeling I need to pick up book 3 as soon as possible; nor would it make me really sad if I couldn’t pick up book 3.

It’s a good solid book that continues to have excellent potential with some great characters and a fun world overlaying a very interesting concept.