After Expenses (Slayer of Evil (Prices Negotiable)) by Andrew Moczulski 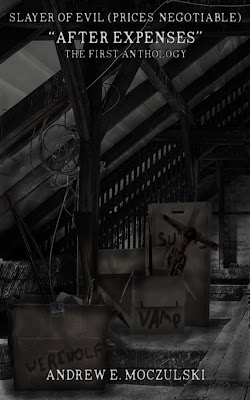 Eric Margrave is a Monster Hunter ($200 per hour for standard jobs, $250 for non-standard, $300 for Ichor-covered slimy tentacle beasts plus expenses. And he doesn’t do demons, dragons, liches, demon-dragons, no dragon-liches, no demon-dragon-liches and absolutely no sentient bread). He’s one of the best in the business. And he can go on a five hour tangent if someone mentions the word “gelatin.”

After picking up Lydia (a 19th century society lady), a Guardian spirit in a confusing haunting in one of his safe houses and new base of operations, Eric is ready to hit the road to help those in need (so long as they can pay. And if they can’t pay, he reminds you that the other victims of the monster probably left some stuff behind you can loot – hint hint), from angry ghosts, to furious nature spirits, werewolves, zombie armies, evil witches and annoying gremlins, Eric’s seen it all and is more than capable of bring it down. With Lydia to help and point out the many many many things he does wrong.

And he can look cool while doing it. Always essential.

This book is a series of short stories. And when I reached the end I was deeply disappointed that there wasn’t more. And this is from someone who doesn’t like short stories. I generally find they lack meta, they lack overarching epicness and they’re just not long enough to develop the characters and the themes and the story.

This collection worked because the themes and characters continue throughout all the short stories – and they’re really well maintained. You can tell that they were written at different times and their voices and personalities definitely develop from the first to the last as the author finds his writing style, but it is really well maintained and works to make the book feel like one, solid, continued work rather than a series of short stories.

It doesn’t have an epic overarching story – but it doesn’t need one. That’s not what this book is about. This is about the often dangerous, often exciting, usually weird and complicated life of a monster hunter. There are no epic overarching plots because usually hunting the monsters doesn’t involve that – he shows up, finds the gribbly thing, whatever it is, kills the gribbly thing, collects his fee and goes home. There’s no need to have a big overarching plot because that’s not what the monsters do. Most of them are happy to terrorise a local village without bringing an apocalypse to the whole world.

So what fills the gap, how does it still work? Firstly, the stories themselves are original and fun. The take on the ghosts (feeding on fear and getting more dangerous), various nature spirits, werewolves, demons et al is original and interesting with some immensely fun twists. Like werewolves not being considered a threat because EVERYONE knows how to kill a werewolf! Or Eric’s utter contempt for zombie apocalypses and how little chance they’d have to really take over the nation. Or his very original take on killing zombies. Each story is novel enough, different enough and twisty enough not to need an overarching plot to keep it interesting – they’re all interesting in their own right.

What also works are the characters. Eric and Lydia. Individually they’re excellent – Eric is one of the funniest, most ridiculous, zany, more than a little eccentric but still lethal monster hunters you could ever hope to read. He’s such immense fun, takes nothing seriously while, at the same time, never losing that sense of just how dangerous he is. In fact, his being so blasé is worked well into showing just how dangerous the man is – he’s seen most of it before, he’s confident in his ability to kill things, he can afford to have fun at it. He can afford to be a little silly. And… when it’s really necessary, all that fun and joy and silliness will just fall away and that lethal steel will peek out, reminding you that this man is, at the root, a contract killer with lethal skills. He doesn’t have to show them off, because he’s that good.

Lydia frequently asks him if he’s quite sane – and I think part of his portrayal is that Eric isn’t, not entirely. We’ve seen his childhood heavily hinted at in one of the short stories, we’ve had frequent references to his past experiences as a hunter, fighting for his life against everything he can including demons (which is why he won’t fight them any more) and his general lonely, unsupported existence all adds up to be a strong indication that he isn’t exactly neuro-typical any more. But all of this is shown rather than told, through both his erratic behaviour and showing the experiences that we would expect to lead Eric to this state. It doesn’t need long speeches of his pain, his terrible experiences or how it has damaged him – the end result is shown through

Does it work? Usually. Sometimes I think it falls flat. Eric goes from being hilariously eccentric to a desperate clown who is trying too hard. It gets too contrived, too convoluted, too childish to work and the suspension of disbelief shatters. It happens more towards the beginning of the book than the end and I suspect it is the author getting used to Eric’s voice and developing him as a character, but even in the last story there are moments when Eric just pushes a little too far to be believable. I think it’s an issue that is getting better and I hope in future books Eric will stay on this side of the believable.

Lydia is a truly excellent companion to Eric. The prim and proper guardian spirit is everything Eric isn’t – she’s staid, refined, old fashioned, formal, at times outright prudish, extremely proper and she has the dreaded power of the Rich Lady Voice. The voice that demands respect and is very good at telling Eric he should be ashamed of himself. She works well with Eric – she’s the aggressive sanity to Eric’s randomness, the voice of reason to his silliness. She’s the determined goodness to his mercenary ways (albeit hiding a heart of gold, of course). Their banter is the stuff of legend and adds to the main bonus of this book

It’s funny. Unreservedly, hilariously funny. It’s one of those books that managed to make me laugh at loud and would win my praise for that alone.

It does not have much in the way of marginalised people. Everyone in the book is straight, and by far and away the vast majority are white. We have a couple of bit parts at the end. In terms of women we have the awesome Lydia. She is a product of her time – but uses that as an observation point, enjoying things like the modern world’s chances for women to speak out (and she encourages women to do so to Eric, often). She is prudish and very disapproving of sex – but, again, Eric skewers this as an anachronism with lots of sarcasm; even she recognises it’s out of place for the time. And we have an unabashedly sexual woman who Lydia disapproves of but is free and confident in her sexuality. Lydia herself is, in many ways, more powerful than Eric though limited by her nature so definitely forced into the sidekick role. She’s definitely more intelligent than Eric and more moral than Eric – but the smart, sensible woman working with the goofy manchild is still something of a trope.

One thing we do have is some poking at the old trope of calling prejudice against supernatural beings “racism” or any other ism. And this is something that can be examined from various angles. Lydia repeatedly says Eric is “racist” against the undead and later we meet a werewolf who criticises him for the same against werewolves and for stereotyping them. And Eric thinks they’re both laughably ridiculous. And points out the reason why people think, for example, werewolves are anti-social savage monsters is because, well, they are. It isn’t an overt challenge – and, at a stretch, it could be interpreted as a defence of stereotyping in general, but that would mean an awful lot of context ignorance. It’s pretty clearly skewering the idea of supernatural beings – especially dangerous ones, as some kind of persecuted group.

In all, this book is an immensely funny series of incredibly fun adventures. It’s light hearted and quirky but still with elements of high emotions, passion, danger and grief mixed through it to give it backbone. It needs some severe work on the inclusion which I’ll look for in future books, and certainly needs to be careful of falling off the precipice of the ridiculous – but beyond that this is a hugely entertaining book that was a joy to read.