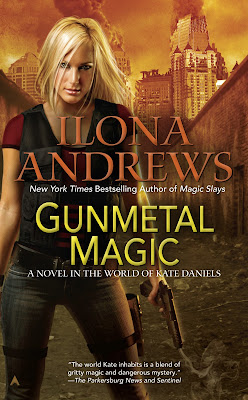 Andrea’s life recently went through an upheaval; kicked out of the Order of Merciful Aid for being a Bouda, a werehyena, she’s trying to get her life back on track working with Kate in their private detective business – cleaning up the magical messes for people who can’t afford to pay the rates the Mercenary Guild charges, nor wish the Order’s unsubtle approach.

But being known as a Bouda means she now has to find her own place within the werehyenas of the pack – being an outsider is not an option. But she has terrible memories of her childhood among another Bouda pack and feels little loyalty or connection to those who would be her people.

Then there’s Raphael. They broke up when she disappeared to try and hold her place in the Order. And he’s bitter and angry and getting revenge. And she’s bitter and angry and willing to dish back. And they’re both still madly in lust with each other – it’s ugly, very very ugly. Especially when the carpet is deployed. Normal people would avoid each other – but as part of her duty to the pack she has to solve a murder of several pack members working for… Raphael.

This is an odd book in that it runs parallel to Magic Gift. The events in both books pretty much happen side by side which is something I haven’t seen often before, especially since they cover pretty much separate events.

There are several things I love about this. Firstly, I love that it shows that the side characters do have a life of their own. Andrea, Dr. Doolittle, Ascanio et al are not just waiting in a plot box, twiddling their thumbs until Kate and Curran need them. They have their own lives, their own activities; things are happening that are important that do not centre around the protagonists. The protagonists are not the only actors in this world and not the people around which everything else simply must orbit.

Another element I loved was that the plot was epic. While Kate and Curran are off doing something relatively small (important certainly, but not world shattering), Andrea is facing off against forces that could devastate Atlanta and more. There’s no assumption that they must get Kate and Curran and when they do get involved it’s just one step along the line, Andrea remains the main actor; she’s still the protagonist. I like that someone else can save the day, the world, other than Kate Daniels, it allows Andrea et al to be truly full characters on par with Kate herself.

Besides the epic, it has the same style, the same perfectly balanced pacing, the same excellent level of description, musing and emotional growth, all with enough to give us full impact and experience without descending (at least not too often) into overdramatic monologues. The dialogue is real, the characters are real, the banter is amusing and it all just comes together extremely well.

This book also has some excellent recapping. Normally I hate recapping with the fiery passion of a thousand suns – it inevitably causes info dumps and the story to be derailed while the author tries to retell the story they’ve already told in a few paragraphs. It doesn’t work. In this it did, part of it is because the world here is so complex that a revisiting of it really worked well – even more so than in Magic Gift. It truly solidified what happened to the city and the world when the magic hit – and further expanded on that by touching on what happened way back in the veils of history before the technology hit – back when magic ruled and gods and monsters roamed the night. The explanation of deity advances the world extremely well in addition to providing plot hooks not just for Andrea’s story, but also information that gives some very juicy possibilities with Kate and Currans.

I just love this world – it’s innovative, original, full of everything you can imagine and far far more. And the author has clearly got a really solid grounding in world mythology and/or spends their lives chained to research books because there’s so much excellent information there. The work that has gone into this series is truly incredible and the realness and fullness of it really shows. Because it’s not just the big things that have been developed – every shapeshifter group has developed its own culture. We have things like the Library of Alexandria trying to replace the lost knowledge with the tech fading. Even side characters, like Roman the dark and evil magician priest who does as his told because his parents nag him (he can recite his mother’s story of the 40 hours she spent in labour with him). The full implications of this radically different world have been considered so it all works well together

Andrea is also a character I love because she is strong in so many ways. Is she a lethal fighter? Definitely – she can kick arse, shoot guns and generally take on most of the people around her – but she doesn’t have massive powers. She is dangerous because she is skillful, because she works to maintain those skill – not because she has the super special magic of specialness and not because she’s a chosen one. There ARE people around her with both – but she doesn’t have to have special powers like them to be considered strong. She isn’t perfect, she makes mistakes, she makes decisions based on emotion – like any human would. But she also knows when to squelch that emotion and, for example, tell her boyfriend when he’s grossly out of line even when she’s desperate for reconciliation. She demands things be on her terms – but doesn’t expect the world to fit her whims and when faced with a situation she can’t avoid, she makes the best of it and twists it to her terms as much as she can. She’s willing to do things on her own, fully confident in her ability and professionalism – and equally capable of recognising when she can’t do something and ready and willing to ask for help from those who can without giving up the lead.

I also like that Andrea is a private detective and ex-cop with actual detective skills – not just the ability to fight and villains who conveniently decide to attack her rather than hide and make her do the investigating thing.

This also gives the book chance to develop Kate as an expert rather than a magical cannon. We’d always known she was incredibly well educated and informed – but that was somewhat secondary to the fact she’s great with a sword and has immensely awesome magic. As a consultant for Andrea, Kate’s intelligence and knowledge takes the forefront, rounding out a character. We have other strong women in the book – like the Boudas and the matriarchal society (in fact, nearly every female werehyena has her own strength) and we have a lot of both wry recounting of sexism (like Ra being cast as the killer of Apophis rather than Bast, because the priests were men and wouldn’t let a goddess be the winner) and even calling it out when applied to enemies: Andrea protests angrily at Raphael’s treatment and dismissal of Rebecca even though she can’t stand her either.

I don’t like the space violation that happens during shapeshifter courtship but at least they’ve turned it into a ritualised mating custom with both partners invading the other’s homes to play all kinds of pranks and tricks. It’s not one side infringing on the other, it’s mutual shenanigans.

All in all there’s an awful lot of good here for a character that has a classicly tragic childhood and is in the middle of an I Hate You/I Love You romance. It just goes to show – tropes and clichés alone do not necessarily break a character so long as there is more to them than those clichés.

We have one gay character, Barnabas – he’s a pretty small role and serves as Andrea’s (and the pack’s) lawyer. Rather than get to know him, the book kind of jumps in assuming everyone knows him and is friendly with him –  so he’s not around a lot and we don’t have much in the way of development of him(which is probably a good thing – because his backstory annoys the hell out of me) – but he’s there, at least. We have a number of POC, Andrea’s neighbours, many members of the Pack, including important people like the head of security and Dr. Doolittle. Some of these are passing names, but some of them have been recurring secondary characters since the first book, the characterisation hasn’t been rapid on them, but they’ve been around so long as to become a fixture. They are becoming pretty major characters now when looked at over the arch. Andrea’s love interest, Raphael, is also Latino. Also, the way Andrea describes Kate leaves her race very much up in the air but it’s pretty strongly indicated that she’s not white or not entirely so (which would make sense given her pre-Babylonian father).

One thing that makes this series stand out on inclusion is that there are POC everywhere. Every group, every faction, every pack, every gathering there’s a conscience inclusion of racial diversity. I don’t think I’ve ever seen a city represented in the genre that makes it so clear that its diverse and not blinding white with the odd token exceptions. It’s the normality of POC everywhere that is so very different.

This series will always be one of my favourites and has a permanent place in my top 10. This book follows along that path – an excellent world, an excellent story, some very real and fun characters, banter when appropriate, epicness dripping of the page and a fairy diverse cast. It’s my precious, yes yes it is.