Forsaken by the Others (H&W Investigations #5) by Jess Haines 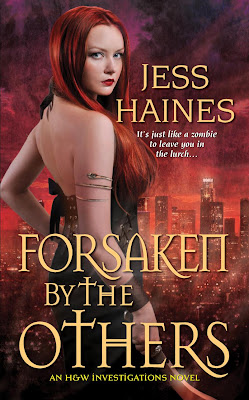 Shiarra is free from the influence of the belt and now can see what has happened to her life. Her hasty decisions, skewed judgement, anger and fear has left a lot of wreckage behind, a trail of victims and even some deaths. It’s an uncomfortable realisation

Almost as uncomfortable is finally coming to terms with the fact that Royce isn’t the bad guy and that it’s ok to let him into her life, that’s going to take some getting used to.

But now there’s a lot of fallout from the most recent chaos with the werewolves and the only way Royce can see to keep Shiarra and Sara safe is to get them out of New York – get them all the way across the country in fact, to his ally in Los Angeles.

“Ally” may be a strong word, however, and it’s clear the vampires of Los Angeles have their own agenda and their own plots that they’re more than willing to rope Shiarra and Sara into. Especially since they have a zombie problem.

I have to admit that in the first chapter of this book I nearly did damage to my tablet. Because we had another rendition of Shiarra deciding that Royce is the source of all evil. Royce responds with patience and understanding and helps coax her into seeing that he’s never hurt her and reassures her that he will never cause her harm.

This is because Royce is SO VERY MUCH MORE PATIENT THAN ME! Personally? I’d open the door and invite her to take herself through it and never return. She has handed herself to him on a platter repeatedly – and he’s refrained from capturing her (and he’s powerful enough to take her at any time). He has extended repeated favours without any expectation – even though she has spat in his face in response. And, given the people she is willing to trust (murderous hate groups and cheating werewolf boyfriends), being on the suspicious list is a damn insult at this point.

Thankfully Shiarra’s endless Royce suspicion does not last. Shiarra very quickly comes to her senses and we have a book that is very much characterised by Shiarra’s regret. Ok, that doesn’t exactly make for a thrilling read – it’s not fun reading someone repeatedly muse on what a bad person they are – but it was needed. It was sorely needed to help redeem Shiarra as a character and a protagonist to establish that her behaviour for the last book – the last 3 books – has been badly skewed and that, yes, her actions have cost people, her actions have hurt people and her actions have left people dead. If anything, there was too much people reassuring her she was a good person – but that’s only natural, none of these people are realistically going to turn round and say “yes Shiarra, you are evil bad wrong and deserve to live forever in shame! SHAAAME!” (It’s ok, I said it for them). So this would be an amazing redemption of the character and a great turning point for the series

She talks about not making good decisions, not thinking things through – but her master plan is “let’s get everyone – including the White Hats – in one place and hope I can improvise something!” This isn’t a plan! This isn’t thinking things through! And how can someone who spent the better part of the book lamenting her past decisions and how they hurt and killed people then decide that getting 3 or 4 lethal groups who despise each other into one place and hope she comes up with a good idea when that happens. Whyyyy, why would you do this?! Why would someone who is questioning their decisions and their morality do this?

And she keeps making decisions based on little information and against the advice of people who should know better. Arnold says that the runes of Sara’s arms can’t be removed, Necromancer says they can – that’s it, she readjusts her entire plans and jeopardises the whole city and countless lives on his say so. Doesn’t even check with Arnold again – just adjusts the whole plan; does she even try to explain it to the White Hats she’s so wilfully sacrificing? I don’t think she does. The ridiculous thing is that, despite upsetting an entire city, she not only doesn’t consult Arnold but she doesn’t even call Royce. She can, she literally has hours kicking her heels in traffic, or alone in the safe house where she could have called Royce and told him what had happened and maybe, just maybe, got some advice about what might be happening. But she doesn’t.

Which is another theme of Shiarra – she doesn’t listen to advice and she doesn’t ask for it. Deliver a package to dangerous vicious weres? Sure she will. Everyone says it’s a bad idea, but Shiarra knows better! Hey, independent faction of vampires lead by someone everyone calls crazy? Shiarra’s on her way, unarmed and with only Sara for back up! Course she is! The only reason this woman isn’t dead 11 times over is because she has some damned impressive plot armour.

The plot itself is an interesting one – the layered machinations, the plots on plots and the red herrings make for an excellent layered mystery full of lots of unknowns – an ideal detective mystery that is more than just a simple, linear discovery and without a vast number of side-plots to distract things – even better, Shiarra actually displays some of her detective skills! No special White Hat toys, no woo-woo belt; Shiarra’s talents are valuable without supernatural enhancement. I can finally believe her in her profession and see her as a skilled and successful private detective. It got the pacing right – managing to keep the story and revelations moving without ruining the whole mystery.

There’s also some excellent hooks for the next book both with Shiarra being dragged into more plotting and her strange affliction due to werewolf infection and ingesting vampire blood. Coupled with her apparent willingness to learn from her past errors and actually showing her own skills rather than the toys people have given her makes me think the next book has a lot of potential.

We do have some inclusion – several of the White Hats are POC, including the main White Hats we deal with; they have a much more prominent role in this book than previously (which isn’t saying a lot). Also, while New York seemed to be awfully white washed, this Los Angeles has a large number of Latino background characters. We also have some gay characters – it’s a first for the series and they are in a position of power – but their enemies throw around a lot of anti-gay insults, they themselves are creepily sexual towards unwilling straight guys and we are looking at some villains here. To some degree, it’s not too far from how the straight vampire villains have been presented – but at the same time we’ve had some straight folks who aren’t creepy evil predators as well.

Ultimately, Shiarra is the problem with this book, because I liked so much about it. The story and the setting I liked, the machinations I liked the different layers and groups I liked, even the pacing of the story and the writing I liked. There’s a whole lot about this series I like, especially now we’ve moved away from the whole “Others are persecuted minorities!” speeches we were getting in the first book. But, even with her improving, I don’t like the protagonist. Her decision making is awful, she has no concept of the consequences of her actions, she’s far too willing to cower in fear but, above all, she does not learn. Even in this book which is all about her facing her past mistakes, she is doing exactly the same thing that got her into this mess in the first place.