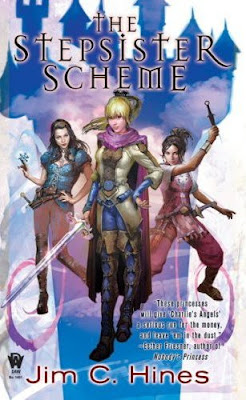 Cinderella, (Danielle) has her Happily Ever After. She’s married to her prince, Armand, she lives in the palace. Everything seems wonderful.

But the stepsisters haven’t give up and gone away just because Danielle made it down the aisle with her prince. And after an aborted assassination attempt on Danielle, Armand has gone missing and the sisters are clearly implicated.

Thankfully, Danielle is not without resources – especially since her new mother-in-law, Queen Beatrice has been collecting extraordinary young women with amazing talents to help find her lost son Danielle doesn’t step out alone – but with the lethally skilled Talia (Sleeping Beauty) and the magically gifted Snow (Snow White). Even though it takes them to the depths of fairy land, they will find her Prince

There’s something so delightfully fun about retelling fairy tales that we all know so very well. Especially taking the often passive princesses and re-writing the story to make them the saviour and the Prince the one in peril for once. I love the application of cynical realism to these fairy tales – especially how the Happily Ever After could never ever be that neat. How could Cinderella so quickly transition from being a servant to being a princess? How can Sleeping Beauty go to sleep for a hundred years and not expect her kingdom to have been taken over and her legend be exploited and controlled? That her throne would just be waiting for her when she woke up? And could Snow White really kill her mother who has been Queen for how long and expect to step into her shoes without any political support or allies? Things are not nearly as neat as fairy tales require them to be. Or that the villains don’t just go away because they’ve been defeated, it’s not so simple.

I also love the reinterpretation of the tales. What Talia does with her dancing gift from the fey. I love Snow’s dwarfs - that was definitely something I didn’t expect – and Snow using mirrors for magic. It’s some excellent developments of the core fairy tales, adding reality and depth to these shallow tales

Naturally this makes the world a very fun one, just expanding on the fairy tale worlds then adding vast variety and possibility from the fairy kingdom alone makes it one with vast potential. And because it has been found with a sense of cynical politics, there’s a greater level of humanity and realism than such a magical setting would suggest.

The plot itself is rather linear, but then this is an adventure quest on which the fate of the kingdom rests. There really isn’t time for side-quests or distractions nor is there ever any question about whodunit , only really how and why – and, more importantly, how to get the prince back. It’s decently paced with lots of appropriate exposition without getting too distracted along the way. Perhaps a little long windedness here and there or moments that could have moved faster, but I’m nitpicking more than anything. It could have been faster – but that doesn’t mean it was slow, long winded or dragging.

I was happy to see that one of the princesses, Talia, was both a POC (including with her own culture and her own cuisine) and that she was a Lesbian. The downside on both is that, of course, she was focused on someone else’s Happily Ever After (but then, so was Snow), that she was the only POC and foreign – so POC is the external other and, of course, as a Lesbian she has both an unrequited love on a straight woman (though I still loved that scene) and is a victim of rape. There’s a really nasty trope that Lesbians in particular and GBLT people in general are GBLT because of a terrible experience with the opposite sex and though there’s no link drawn in the text.

The book has 3 very capable women – but with different strengths and different personalities. They’re not carbon copies and they’re all strong in their own way and through their own lens. We also have Queen Bea who is both strong – but fully accepted as equal by her husband and also independent from him – she does things her way separate from him. Of course, the protagonists are motivated by a man, but a) it’s princesses rescuing a prince which remains refreshing and b) it’s more than just a love interest with him being heir to the throne. But we also have lots of little side points that carry little messages without belabouring the point – like Talia having the gift of perfect beauty but not being considered perfectly beautiful because beauty standards change according to time and place so there is no real perfect beauty.

There’s a lot of good in this book and, from that, I think a lot of good in this series. It’s intriguing, it’s funny in a satirical kind of way while also adding a powerful sense of realness to stories that are more detached from reality than almost any other. Refreshing, fun and original – what’s not to like? I don't know.... but I didn't. I didn't dislike it but the whole book was so incredibly blah for me. There was just nothing I could invest in. There was absolutely nothing I hated about this book, I can't point to any real problem - just that I wasn't invested. I didn't overly care about Cinderella's story.

And for the life of me I just can't think why, but I was completely unhooked. Danielle, Snow and Talia just didn't pull me in. Maybe the story was too linear and reliant on action scenes? Or it had a sense of the inevitable? I honestly can't say why - but I just wasn't pulled in. I should have loved it... but I didn't. It wasn't bad or boring and it was easy to read - but if I put it down I wouldn't feel compelled to put it up again. Nothing is pushing me to put it down - it wasn't bad by any stretch - but nor was it compelling.