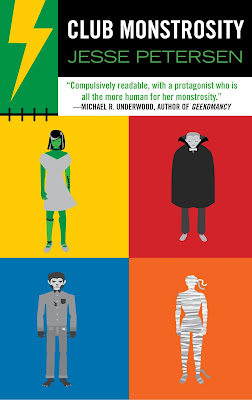 There are many support groups out there for all kinds of problems – and even the monsters have problems, albeit, rather more unusual ones than most people’s problems.

Chief among them is not actually getting caught (made difficult because Dracula will not stop wearing that damn cape); but even that fades when they start disappearing – and turning up dead. And dead by the same methods as is found in their stories.

This causes Natalie - Frankenstein’s monster – to try and rally her fellows in the most difficult task of all. Actually working together with minimal hissy fits.

This book gets massive points for originality. Just by taking all the monsters of so many schlocky, horror movie fame and putting them together is pretty new – especially lesser seen versions like the swamp monster (Linda, the weepy, emotional, needy one), the Blob (Bob, who has a hoarding problem because he accidentally absorbs things), the Invisible Man (wants to be an actor) and the Mummy (Kai, has a severe need for moisturiser) is unique in and of itself. Werewolves and vampires we see, but the others? Not so much.

And their need for community, their need to have people to know who they are and have their support has brought them together even if they don’t like each other very much. I think that’s the ultimate humanising element of these monsters, actually making them more human than so many human characters in other books. They’re not nice people, they don’t like each other very much. They’re not over the top “mean girl” villains, they’re just normal people who, like most normal people, can be a little irritating. Whether it’s Alec with his inappropriate humour, Linda with her desperate neediness and emotional outbursts, Natalie with her sarcasm, Kai with her impatience, Jekyll with his wealthy clueless bubble or Drake with his over-believing of his own legend.

And when danger threatens they rally together! Except not. Because people don’t. They bicker, they argue, they get distracted, they go into denial, they bury their heads in the sand – which is exactly what the group does. They lie about silly things and keep secrets that don’t matter and argue about things that are irrelevant. It’s some incredible human and real about them – they act like normal people. Not monsters, not heroes, not characters – but people. I especially like how this adds in to what Linda says in that she clings to her over-emotional neediness because it makes her feel human; even the flaws, even though it’s an irritating habit, it’s a human flaw and it’s a way for this monster to reconnect to their humanity

The path to humanity is an ongoing theme and a major part of Natalie herself – part of her not wanting to go on the rampage isn’t just from conscious but from rejection of her monster nature – she doesn’t want to be a monster, she’s trying to fit in, she’s trying to be human, to act, think and live as a human. She carries pepper spray on her keyring, because human women working at night would feel the need to, even though she could rip any attacker’s limbs off. She works in a morgue to cover any possible smell, even though Alec the werewolf says she doesn’t smell even to his enhanced nose

This same insecurity about their humanity is an ongoing theme – Linda and her concealing make up, Kai being sensitive about her need for moisturisers, even Alec obsessing about razors to try and tame his raging facial hair – it’s a real theme and very well and subtly presented.

While this humanising makes for some awesome characters (and Alec is cute and I can definitely see the scruffy scruffy werewolf with puppy dog eyes) it makes for a rather… realistic story. They don’t spend a lot of time investigating, they’re not very good investigators. The enemy rather falls into their laps rather than them seeking them out. It’s decently paced, but it’s decently paced with more character interaction and development. Which is excellent, but the plot kind of drifts with it.

Again, this adds to the realism of the book. Real people aren’t organised don’t do well in a crisis, do get distracted and don’t really know how to track down a murderer. But while it made for awesome characters, it made for a plot that was more good and awesome. Amusing, with excellent characterisations and an amazing concept; certainly, but not the most exciting murder mystery ever.

But I’m not sure that would have worked. I don’t think it could have been exciting or twisty or complicated and kept the very nature of the book itself.

I’m glad to see that Kai, the Mummy, is certainly a WOC because that would have been very annoying. We also have a lot of excellent women from Kai, to Natalie to Natalie’s boss who all have different strengths. I would have liked her to be more friendly with some of them since Natalie doesn’t regard any of them in particularly high regard. But then, she doesn’t regard anyone with a particularly high regard – because everyone, male and female, in this book is flawed. Still, I’m hoping that just as Alec has earned more regard from her in his path to love interest, I’d like to see the same in future books with Kai and maybe Linda. But I think Kai’s on the path. There are no GBLT people

I liked this book a lot, it was fun, it was light and it was original and unique. It’s possible I’ve been reading rather a lot of cookie cutter books lately but that was something precious to me. The dialogue flowed amazingly, the characters are fun and extremely real and there’s a lot of good here. I recommend it and look forward to the rest of the series.

A copy of this book was received through Edelweiss