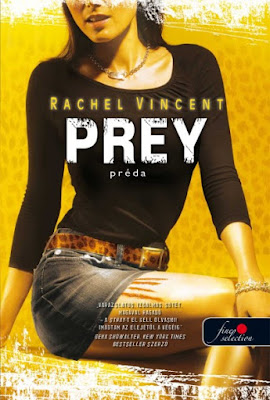 Faythe’s pride is being embroiled more and more into vicious werecat politics as her father’s rival will resort to any means to try and take control of the council. Up to and including dragging them into a war.

There’s something else going on with the Strays as well, not part of any Pride, they’re often ignored. But when Marc, Faythe’s love interest, goes missing she is torn between staying with the Pride and looking for Marc

The plot of this book slightly frustrates me. There are two interesting plot lines I’d really like to focus on – the political shenanigans of the werecat council as an alpha does his very best to overrule Greg and replace him as head of the council by any means necessary. The second is the plot line of Pride cats apparently doing odd things to Stray cats and tracking them. I have no idea why, given that any Stray can pretty much be murdered and no-one actually cares. Those are interesting plot lines

Instead we focus far more on Faythe trying to find Marc who has gone missing. I don’t care. I don’t like Marc. I’ve never liked Marc. I think Marc’s relationship with Faythe has just been so very terrible for so very long. If he dropped out of the series entirely I’d be much much happier. So a storyline all about finding him? Not really something I’m going to focus on.

I’m going to have to repeat a lot of what I said in the last book in this series. It’s not exactly bad or even problematic – if we ignore everything that has come before it.

I can almost feel the author desperately trying to rewrite those previous books. I’m almost certain that if there was a way to go back in time and change them the author would. We can see the narrative they want to tell:
Faythe lives in a misogynist society but is lucky to be born in the very progressive Pride who is trying to walk back a lot of the worst abuses of their society – both against women and against Strays. Greg, her father, understands the science and realities and has every faith in his daughter being a capable ruler and taking over after him. Faythe was very young in the first book, naïve, unaware of how good she had it and full of childish rebellion. But she learned from her mistakes and is continuing to grow and learn and mature (even if, even in the last book, Faythe proved herself to be completely incapable of controlling her tongue for five damn seconds). And now she has grown and is still frustrated but she and her dad are fighting the good fight. Not only are they fighting the good fight, but Faythe has learned and grown and is even a moderating influence on her father when he starts to make rash and emotional decisions

Yes, Faythe has grown enough that she is stepping up as leader and being responsible for her Pride and bravely standing up to her father. She’s also being a kind, wise and gentle guidance to Kaci, the werecat “Tabby” they’ve taken in as well as supporting Manx, the abused Tabby who is now on trial for the murders she committed while on the run and afraid.

Manx’s own story is a painful one with every part of what it means to face the judgement of these Pack Leaders and what they did to her. It’s actually really insightful in looking at what the implications of helplessness mean for a woman like Manx who has been abused on top of her now being so dependent on the patriarchal society of the werecats for her protection. Especially when we have the big bad of this book effectively trying to take over werecat society by controlling the rare females; the big bad is defined by making the decisions of the women for them

Honestly, it’s an amazing improvement over the previous books – here’s where the misogyny of the society is being actively challenged. Here is where we see a female protagonist actually stepping up and being capable, a moderately good leader (not an awesome one – her decisions are overly self-focused and not perfect – but they’re still more than reasonable) and actively challenging the problems of that society. The prejudice is called out and challenged

Yes, it’s pretty amazing to think these are the same books

Yet they are the same books so we have problems here. Faythe continually comparing her behaviour to Kaci’s and how she was such a foolish child is a terrible recap of the previous books. You can’t re-write the bullshit of the first books like this. Faythe was locked up, Faythe was kidnapped, Faythe was caged for not obeying. Faythe was groomed – by her own father – and all but forced into a relationship while being constantly guilted every step along the way. This happened, it was terrible, it was awful and it’s only made worse by pretending this was all just Faythe’s immature acting out. It’s terrible that we’re still treating Marc as her true love forever more without any acknowledgement of the problems from before – or even treating Faythe as the one at fault.

It doesn’t change the inherent problem of the world building. There’s no reason why the werecats would only produce a few female children. It makes no biological sense – in fact, with Faythe insisting that sisters are pretty much impossible, I can’t see why the werecats aren’t going extinct.

This whole world building – on top of the plot – turns most of the women in this series into objects to be possessed. That’s literally all Kaci exists to be – an object lesson and something to possess. The same applies to Manx, she isn’t a character she’s an object to be fought over. A being that exists to show how terribad the other werecat alphas are. The only other woman we see is Faythe’s mother who does very little except be super sad and cook. The other female alphas are almost non-existent. The other female members of the prides are almost non-existent. There are no female characters in this book beyond Faythe. We have Faythe. We have the two Learning Objects to be Possessed and we have background female-shaped spaces.

There’s another element that this book tries to address but kind of fails – Faythe insists that her pride and her father, Greg, treat the Strays (werecats who are created not born) far better than the other prides. She even talks about respecting the civil rights of Strays. But… except for Marc (her designated love interest), we see zero sign of this. She is outraged that someone is tracking the Strays – but she herself is quite willing to beat a Stray half to death when questioning him and we saw the same thing in the last book as well. There’s no respect for civil rights here, it’s ridiculous to even claim it. I think this is the underlying issue of this book, maybe this series: just because you SAY it’s so, doesn’t mean it IS so.

And it only makes it worse that every Stray they show any kind of compassion for turns out to be evil in some way. This is a problem, again, which this series loves – the narrative is designed to reinforce the prejudice of the characters within it.

This book also kind of makes an improvement over the previous books’ treatment of race: the only POC is Marc who is latino and it’s almost never relevant in the book. How is this an improvement? Uh – remember the spicy accent? Sadly some books are so terrible that erasure is an improvement. Similarly I continue to be kind of grateful this series has not inflicted itself on LGBTQ characters so far.

In the end I am torn. On the one hand I think this book would be vastly better if the previous books didn’t exist. If the previous books hadn’t established such an awful back story that this book is now saddled with then this would be a much better and much less problematic story. On it’s own this book isn’t so bad at all, it’s certainly not even remotely as problematic – but it has the millstone of Stray and Rogue dragging it down and a whole lot of bullshit it is trying to justify. At the same time, I have to question if I would have been as positive about this book if I didn’t go into it with a cringe on my face waiting for the awful to happen. It still has problems – erasure, lack of meaningful female characters, completely unnecessary sexist world building – but feels like a vast improvement because it’s not Stray or Rogue.