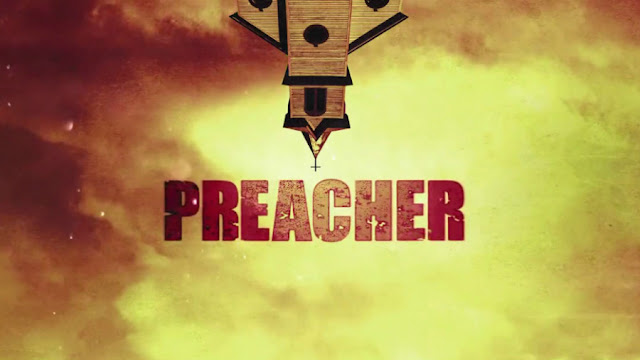 It’s season finale time. You know this is going to be so supremely random and weird. It’s Preacher after all.

Tulip is back in town – with Carlos – and she tracks down Jessie staying with, of all people, Donnie and his wife. Actually I quite like how Donnie has had a whole come-to-Jesus moment over Jessie’s mercy. Make note of it for later importance – the one person Jessie has actually “saved” has not been because of power or Genesis or antics – it has been through mercy. Sparing someone he could have killed. Someone he could have killed and no-one would have judged him for it. Definitely relevant

We finally get the back story of Carlos – he betrayed them while they were robbing a bank – betraying them because he was jealous and bitter about their happiness together. His betrayal coincided with and may have caused Tulip to miscarry.

And now they have him at their mercy and have the weirdest, deepest and most THEM argument ever. Starting with Jessie advocating forgiveness, because hell (with Tulip outraged that Jessie is letting this go). And then Jessie deciding he’s going to hell anyway so he’ll do it – for her. Which leaves her super touched and making excuses NOT to kill Carlos because when it comes to touching emotional murder, it’s the thought that count. So after complaining about Jessie making a mess in her car while he argues about precautions they let Carlos go. But not without a brutal beating first

And this is just them. They’re not good people – but they’re not nearly as terrible as they could be. They’re not rational, they’re deeply emotional and often pretty broken and both excellent together and deeply unhealthy together. This entire scene pretty much epitomised Tulip and Jessie in essence.

While they’re having this reunion, Cassidy is being tortured by the sheriff who wants to know where Eugene is. And yes, by grabbing his criminal record and paying attention to his sun aversion, the sheriff knows Cassidy is a vampire. It’s a bit convoluted but I’m going to let it go because the emotional impact of the sheriff’s grief for Eugene – and his guilt – is so powerful and so simply and beautifully acted that I have to let it be centre stage. Especially when Cassidy is released after he scores a palpable bullseye right in the sheriff’s guilt. Kudos to a stellar performance right there.

But this is all leading up to the big reveal – god is coming to town (and there’s a queue outside the beauty salon. Which is a) both perfect zany Preacher and b) a perfectly cynical and accurate summation of human nature). They arrive in church, every character in a vast crowed to watch Jessie use the angel phone

It’s time to use the phone (which has a dial up internet tone! Oh, Preacher I love you for this!)

And god appears and everyone is awed and impressed even though it looks like really bad CGI. No, that’s an offence to CGI. Olympus was CGI, this isn’t even that, this is a projector and bedsheet attempt at special effects complete with static. But it’s still impressive to the townsfolk who think they’ve found god and – kudos to the director – there’s a genuine sense of hope and joy in the crowd

Until Jessie twigs it’s fake to use the Genesis Voice to demand to know where God is to get the terrible answer – they don’t know. God is missing. God is gone.

Boom… and yet again (returning to my previous point) we see Jessie utterly failing to save people with his super power. In fact, again we see never has he ever achieved anything good with his power. This is, among the zaniness, the whackiness, the general fun of Preacher, the underlying message. Jessie has a power that can literally bring angels to their knees and he is incapable of achieving anything with it. As Eugene says, it’s a crude short cut and it fails every time he tries to use it.

I think this is really something that is easy to miss on Preacher especially since it is so zany and weird and fun and random and gory and more than occasionally childish. It occasionally pulls out some good messages, excellent character interaction and has a truly dedicated devotion to its own themes and messages often adding depth, pathos and meaning to some of the most ridiculous scenes. To compare it to some other zany-fun-shows I love, I think it achieves this and this level of depth in a way that Z-Nation only occasionally managed (though when it did it managed it well – but with a massive thematic crash because it was never as integrated into the story as Preacher did) and which Librarians pretty much utterly failed to do. Preacher is zany, ridiculous and weird – but also emotional, with strong messages and themes it keeps to even when fighting reincarnating angels in hotel rooms.

Anyway, back to the recap!

In the aftermath of him destroying the newly minted faith of the entire town… everything falls apart. We have a series of tragedies, suicides (and Emily’s quiet, resolve and strength), death and despair – before the man who continually managed the methane power plant throughout the series (and, yes, other praise here: this has been a little cameo from the very beginning, this guy constantly presenting a meltdown. I didn’t understand it – but it established this entire scene without a word of exposition) has a heart attack after kinky sex (again, sex positivity meets mockery in a depiction that leans more to the mockery).The plant explodes, destroying the entire town in gas, explosion and shit.

In case we’re in any doubt, a news announcer even says that no-one survived.

Only Jessie, Tulip and Cass survive with a new quest – to find god. And if he’s in trouble they’ll save him. If not they’ll fight him. And so begins an ultimate road trip

Extra bonus moment – Jessie shows Tulip the Genesis Voice and makes her kiss him. The music swells romantically, true love is in the air – and she smacks him. Because compelling a kiss is not ok!

This show just destroyed just about every supporting character. We have the antagonist lurking for next season and maybe the angels – but that’s it. Everyone else: Emily, Donnie, the Sherriff, Betsy, Odin Kincannon, very other weird

That’s a bold move to any show – but, again, I think this is Preacher being, to belabour the point, on message. Jessie wanted to SAVE his father’s church and this town. And he used the Genesis Voice to do it which ALWAYS FAILS. From him failing to convert Odin – with Odin yelling at him to denounce god at the end, to the paedophile bus driver being murdered by his charges (a clever way to address another of Jessie’s failures without actually having him rape a child), to the mother of the comatose girl suffocating her when she lost all faith. Every individual thing he tried to change with the Genesis Voice failed and on top of that the meta goal, the saving of the town and the church, is epicly wiped out as well (and we focus on the church in the explosion). This explosion (and literal shower of shit) and plot reset is the final, complete symbolism that JESSIE HAS FAILED. Or maybe that god has.

Yes, I know I’m being really in-depth and a bit highbrow about this zany show, and it is a bit defensive I know. I love this show and, yes, I love this show in part because it is zany (yes I love zany) but also because I really believe there is more there than just zaniness.

I’ve like little cameos of interesting points as well – like denouncing the racist Native American mascot. Or Donnie and Betsy’s relationship. Or the brutal racism and awfulness of the romanticised wild west. Jessie and Tulip’s excellent past depictions and struggles with little elements like the extent of Jessie’s father’s charity and the lack of any kind of support Tulip has received.

Tulip is the most prominent, pretty much only, POC in this show. Which is a problem right there because the cast isn’t that tiny. She is awesome but I do feel she needed, deserved, more. She always felt a little periphery to both Jessie and even Cassidy. We needed more Tulip, we needed more POC. We also needed some LGBTQ people (yes there was a vibe with the angels but I’m not giving points to any) or any other minorities, to be honest.

In all – while we could use more minorities – I loved this show and I cannot wait for it to come back!