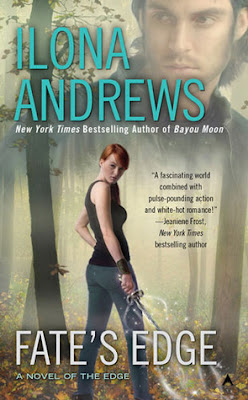 Audrey was building her new life. She had left behind her past of crime conning and thievery and finally had a legitimate job in the Broken

Until her family comes back with another unreasonable demand. She’s dragged in to make one last steal for them

Unfortunately what she steals has the potential for some terrible consequences. And Kaldar Mar, another thieve, con-artist, gambler – and agent for the Mirror, Adrianglia’s secret service – has been tasked with getting that property back. And he’s going to need Audrey’s help.

Like the rest of the Edge series, this is a paranormal romance. But like the rest of the Edge series I’ve enjoyed it despite generally not liking romance tropes. Part of this is because, like the other books, there is an excellent world setting, some great characters and a fun plot line that runs alongside the romance. The romance is not used to derail the main plot. And I know this is a little unfair the call a romance plot a “distraction” but I do find, especially in paranormal romances, a lot of the books I’ve read have

But it’s also because this book seems almost to be gloriously parodying those romance tropes. Including some excellent lines like:

“Oh no, not that seductive face. I’m overcome with the need to take off these awful clothes. What is happening? I do not understand. Oooh. Ahhh.” She touched her wrist to her forehead. “Somebody help me. I’m being drenched with my own fluids.”

This is reinforced by George. We don’t see him at school but he does refer to how he’s making himself popular by being a Brooding YA Hero:

“My past is tragic. I wouldn’t want to burden you with it. It’s a pain I must suffer alone. In the rain. In silence.”

That’s some utterly quality mockery there

Of course Kaldar and Audrey do end up together because it is a romance. But what is glorious is that no matter how much they’re hot for each other and no many times they play together, they’re still focused on the actual job. They’re focused on the mission and the conflict – they keep the romance simmering without derailing the actual plot line or giving us the idea that the main plot line is not important. This is a problem I’ve seen before – the whole world is in the balance but hey they still have time to have a quick shag while running away – sometimes it’s frankly bizarre.

I like the plot – I like that both Audrey and Kaldar are equally invested in seeing this through while, at the same time, it’s not because Kaldar has a job to do and Audrey needs rescuing which is somewhat the pattern of the last 2 books. Audrey can, by the end of the book, definitely walk away, she’s not even motivated particularly by familial loyalty or saving herself or a safe/stable future but by her own sense of responsibility.

The plot continues to follow the ongoing conflict between the Dukedom of Louisana in the Weird and the kingdom of Adrianglia with the ongoing creepiness of the Hand’s agents but, at the same time, not just portraying the Mirror of Andrianglia as super nice good guys. They’re equally clear as a ruthless and often and brutal in achieving their aims (albeit better than the Hand, certainly). It’s, as ever, excellently paced with a whole lot of action – it’s a joy to read and it was painful to put the book down because the action kept coming

The characters are, as I’ve already suggested, extremely fun. Audrey and Kaldar have a great rapport with each other and I kind of love seeing these two grifters working together and putting their sneaky sneaky talents to use, - not just being the combat monsters that the previous books have brought us. They’re sneaky, crafty, they’re thieves and liars and tricksters and such good fun

Even tacking on the kids – George and Jack have their own excellent storylines. They’re so clearly brothers with their endless spats and fights, equally they clearly care deeply for each other. They bring a whole new level of conflict by looking at Jack’s difficulty of fitting in with Weird society while both of them facing considerable class based prejudice for being from the Edge, despite George’s obvious intelligence and capacity. He has to work extra hard at being perfect in order to offset his brother because they are both dismissed as being the same – an excellent comment on how prejudice is often viewed.

I also love how these books handle their world building – not with vast info-dumps, but just by building another small layer on top of what has happened before, telling us a little more about different countries in the Weird or how different places of the Edge are run and different from each other. We can see this amazingly good, deep, broad world without being overwhelmed in convoluted info dumps or given more information than we actually need. Yet it still gives us all of that actually greater development and breadth that is such a hallmark of Ilona Andrews world building

I love how this book also brings in characters from the previous two book in the series – which means we have the same POC of the previous book: Cerise and in turn that also applies to Keldar her relative though it has to be said that the depiction is somewhat ambiguous. We continue to have Nancy Virai, head of the Mirror who is a Black woman – but she is an example of promoted to obscurity. We also have bit parts among the bad guys and the new country – West Egypt – but none of them are really in big roles. On top of that we don’t have any LGBTQ characters again, something which becomes more glaring with each book. Further compounded, while this book (and series) has no LGBTQ characters - it does have several anti-gay slurs that didn't even fit the plot. If you're not going to have LGBTQ characters, please leave out the homophobia as well

I also have to criticise the depiction of Alex, Audrey’s addict brother. Look, it makes sense, given her history, that Audrey would not have a kind world to say for this man. But we see him completely separately from Audrey’s viewpoint. We saw his objective behaviour and is completely and utterly terrible. There’s no humanisation of him, no attempt to present him as anything else than an utterly terrible person because of addiction: not even making him pitiable, just a figure of awful.

Also the cover - why does Audrey have a sword? That's Cerise's schtick, not her's. Also - that's a creepily youthful face for someone who is described so sexily (especially since the breasts look vaguely like a black blob someone has photoshopped vaguely in the vicinity of her torso). Honestly this looks like a 12 year old has had some breat-y-type-lumps pasted on.

I do love this series and these characters – and really am looking forward to this series developing further. But at the same time I kind of want what we have to develop further. I’ll love the next book – but I’ll love it even more if we’re following the world building and the ongoing conflict and meta rather than introducing a fourth couple whose romance and shenanigans we follow. I’m sure that will be an excellent story – but there’s already so many excellent seeds for a story here already we don’t need more hooks. You’ve got four people working for a spy agency with 2 kids apprenticing in and some nice noble intrigue potential from the first book – who needs more than this?! There’s already 6 series worth of books here alone!