Mortal Ties (World of the Lupi #9) by Eileen Wilks 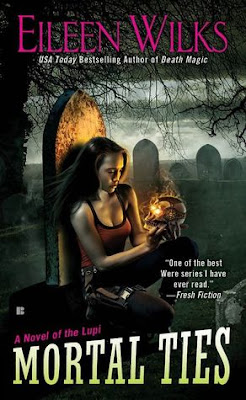 Cullen Seaborn, the Nokolai werewolf and sorcerer has created a prototype that could change so much for the world – helping reduce the ongoing problem of the magical turn which is so destructive for technology. Albeit with a few side effects that still need ironing out

Those side effects make it all the more important to track it down when it is stolen. Made even more of a problem when the very existence of that prototype was supposed to be a carefully kept secret only known to Nokolai loyalists.

It becomes even more complicated when the thief gets in it – and it’s Rule’s unknown half-brother with additional problem of both Robert Friar’s evil manipulations and two different factions of sidhe.

I love Lily. I don’t think I’ve stressed this enough about how utterly awesome this character is. Because above everything else she is professional and she is sensible – and my gods that is so very rare in this genre

Lily is a cop and it permeates her character. I love to see that professionalism in everything –how she looks at every scene as a crime scene, how she sums up every person as a witness or suspect. Her logical, sensible way of summing up every situation she’s in with intelligence and logic. This is, more than anything, Lily’s super power. Not her abilities, not her immunity to magic, not any kind of fighting skill – but her intelligence and her professionalism. The way she approaches every mystery and investigation with keen intellect and steady progress is so excellent. Especially in this genre where most protagonists decide to “solve” crimes by hanging around until the bad guy tries to kill them (often with no apparent reason). Lily is a dedicated and capable investigator.

I also like the conflict of her development, especially how she needs rules to ensure she doesn’t step outside the law, I like the way she recognises what she is actually capable of rather than, again, so many protagonists who are happy to decide they are the ultimate authority and don’t need any pesky rules.

She’s also a woman of deep passion who cares desperately for those around her but makes decisions without emotion. All her decisions are rational. She cares about Beth, her sister and Rule, her fiancé but she doesn’t let caring for them make ridiculous decisions. She doesn’t have massive over-dramatic reactions to things like Rule not telling her everything or them having a disagreement. When Rule is going through difficult times Lily is so perfect, she’s there for him while giving

In fact that’s something else I love about this book – the relationships between the characters is so sensible without being emotionless. Beth, Lily’s little sister, is obviously a very different woman from Lily – but their relationship was meaningful and deep, their disagreements present but handled in a sensible manner without either side doing something ridiculous or turning against each other. I love the dramatic emotional moments of Beth, the complexities of her dealing with things like killing someone, even in self defence and what that does to someone.

Lily’s relationship with her friends and colleagues doesn’t feature as massively in this book but part of that is how awesomely those characters are presented – because Cyna, Ruben, Sam etc all have their own lives, their own issues and their own battles. They’re not all their for Rule and Cullen and Lily to call upon whenever they want – because every character is so very heavily involved in the meta plot of this world

Which, again, I say is amazing and I would head this review with that because it’s awesome – but Lily is definitely one of my top 10 favourite protagonists in the genre and has to take first billing

I love this world. I love the epic, I love the building of the ever more epic conflict. I love the development of the differing factions and societies: honestly, I would gladly read a textbook on sidhe culture in this world because the development is so excellent. Including differing factions – yes differing factions and complicated politics and beings that are not so much good or evil but just alien. This is what I really like is how we realise that the Sidhe just have radically values and culture to humanity – as they should. Even with their goal being for reasons completely beyond anything Cullen and Lily had imagined because the Sidhe goals and values are society is so different from anything they knew.

Which brings me back to relationships – because so often Lily can be in opposition to someone yet still have a lot of respect for them which we see here again. She can build a rapport even with her kidnapper because she respects them and can see their point and because they’re actually characters and not just demonised evil. This applies to the odd twist of Beth’s love interest as well.

This world building continues not just from cultures and magic and also mechanics. Again, I would read an entire book of Cullen exploring the possibilities of magic and how it works. I love how they don’t have all the answers, that they do have theories and a lot of exploration and experimentation and thinking which is very real.

We also have some excellent main characters and leaders – leaders who are respected and capable and awesome. Ruben is excellent, Isen is several steps beyond awesome with his mastery of politics and people – and I love that. I love that the excellent, most admired leader isn’t excellent because of his woo-woo or his skills or his god like power, no it’s because he knows people, cares about people and studies people.

And then there’s Madam Yu. She is unquestionably, amazingly, supremely awesome. She steps in, she takes over, she gets everyone inline and she gets it done. It is hard not to cheer and leap up and down in joy every time she appears

But, yes, this awesome has to be qualified because she is the biggest poster child of a Tiger Mom in the history of stereotypes. She quite literally turns into a tiger. However, that is not all she is – she is powerful and demanding but also supremely capable herself and part of an Asian family (including Lily and Beth) who do not fit this or other stereotypes.

I have said before that I really do not like how the Lupi are all male. It’s a terrible sexist trope used all the time to reduce the female presence in these series as well as keeping women out of more combat and physically capable roles and instead making them healers or seers (very clearly seen here with both the Rhej’s – like priests/historians and the healers in the packs). But this book helped continue to try and walk back aspects of this. Like female leadership being important in the big packs because, unlike the actual lupi, they have no trouble standing up to the Rho and aren’t half mind controlled by the Mantle all the Rhos have. If you need someone to dissent with the chief, it usually has to be a woman. Or the many times we’ve see the lupi be “protective” of women and we then have the women fighting back against this – both with Lily and Madame Yu repeatedly but also things like the female firefighters. Even Rule making it clear to Leidorf – one of the more traditionally sexist clans – that he considers Lily his equal.

The underlying sexism of this series’ world building is being extremely well challenged by repeatedly excellent female characters, repeatedly inserting women into positions of power and challenging the sexism of the lupi packs.

This book also finally goes a long way to helping with this series’ ongoing problem with LGBT people. Previously the books have constantly referenced LGBT people without actually portraying them – even Li Qin and Madame Yu were finally overtly defined as a couple – but only after they both became much less involved. Not only did we have Madame Yu returning but we also have the introduction of Rule’s brother – a gay man whose relationship is presented as important and precious and valuable as any of the other relationships in the book. His sexuality is a valuable integral part of his character without being the sole defining element of his character. It’s really excellently done and the only thing stopping me waving the flag and praising this character is that A) he’s unlikely to be a recurring character and b) this is book 9. At which point even the most awesome character in the world is going to get some snark from me because it took an author 9 books to get round to it.

In addition to this excellent character we also have the idea that all elves are culturally bisexual and consider monosexuals deviant… so more bisexuals? A bonus. Those bisexuals largely being villains less so. Bisexuality being something the non-human culture has less so. The idea that non-bisexuals are deviant utterly terrible. So some pluses but some strong negative elements.