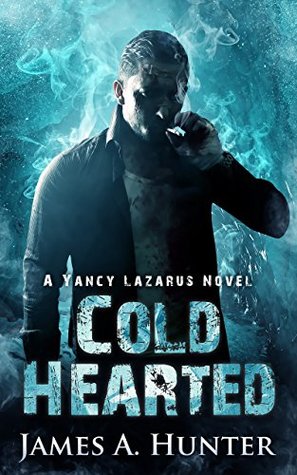 Yancy Lazarus is a drifter, a gambler, a drinker and a blues man and he’d really like to be left alone. He did his bit for the Guild of the Staff, the wizards’ ruling body, and now he’s past done with them.

But when an old friend asks for help to rescue his grandson from some winter fae, Yancy can hardly say no. He can’t leave a child in their hands.

Unfortunately, the kidnapping of a child is only the beginning of the problems he uncovers – and not only does he find a conspiracy that could cause immense damage, but he also places himself smack in the middle of it. Accused of murder (and then relying on the arresting FBI agent to be an ally), weakened and depowered and targeted by a pissed off mage and some ancient elemental force, Yancy’s own survival depends on him getting back in the fight.

It’s been a while since I read the first book in this series Strange Magic, but despite the wide and rich world it quickly came back to me because it has an excellent voice and tone that’s pretty unique

In the world we have a flawed wizarding organisation

In many ways it reminds me heavily of The Dresden Files but, perhaps due to length of the series so far, not quite on the same scale. But I think that’s also very much due to Yancey – because Yancey generally doesn’t want to get involved. Yancy is getting by and is quite resentful at the Guild of the Staff dragging him any further in.

Yancey is quite happy to slope around the world, preferably warm parts of the world, smoking and drinking and gambling and eating excellent BBQ whenever he can. He’s not into saving the world and he has little faith with the Guild of the Staff, with its far greater emphasis on politics and excessive caution than in actually looking out for the members it’s supposed to be helping.

Yancey isn’t involved in the wider aspects of the world setting here – which is also reflected in the world building: we have lots of hints of various monsters and creatures more than the larger organisations. This draws more from Yancey’s long and varied experiences – so we have some excellent world building about the monsters and creatures Yancey runs up against (which are varied, different and original creations which are excellently depicted for a very action packed book) than the sweeping organisations (though I love the world building around Old Man Winter and the summer and winter fae)

That doesn’t mean there isn’t epic here – but it’s epic that Yancey is beginning to uncover (and reluctantly at that) and become part of. The wider world that they are being dragged into has been excellently hinted at and I’m sure is going to develop much much further in later books.

The whole book has a very noir tone, while not set in that era. It has that cynical, jaded, world-weary sense that really does such a lot to explain Yancey’s character than any amount of overt explanation. You don’t need to have it expressly explained to picture Yancey sat in a dark, smokey bar, looking perhaps 10 or 20 years older than he should be, playing the blues on the piano with a large glass of whiskey to hand; occasionally pausing to share some painful old war stories with people he respects and tells people. The tone is excellent for world building.


Yancey’s character is well established – and with him is the other main character in this book: Agent Nicole Ferraro. She’s a cop, she’s tough, she’s ex-army, she’s no nonsense and she reacts to the supernatural in an excellent manner. She is, obviously, doubting and suspicious of the whole idea but quickly accepts the evidence of her own eyes. She’s not super woman and obviously has no special powers to help her against the supernatural – but she is skilled, determined and, surprisingly, doesn’t end up taking second fiddle to Yancey. It would have easily turned her into a sidekick to Yancey, moving in the shadow of the magical Yancey – but she works much more of a peer to him. She even gives him a lot of snark and they have an excellent, fun, relationship. I really like how they bounce off each other.

The action scenes are fun, but there are a lot of them and they’re often long. Like the opening scene has Yancey going to find his friend’s grandson who has been kidnapped. This involved lots of fighting gnomes, then a random encounter with a harpy which felt unnecessarily shoehorned in and then more gnomes. We have a really long fight scene in a police station. Another long fight scene in a bar. There’s a lot of fighting

And don’t get me wrong – these fight scenes are well done, but they really do consume a lot of the book. Especially the beginning of the book where the story hasn’t really begun but we’re following through this really long series of fight scenes before we can get to some decent plot.

This slowness of the book, not because of pacing, but because of these very long battle outtakes really do make the book longer and harder to read than it has to. It makes this book just a bit slow and a bit frustrating to follow

The diversity is also sorely lacking. While we do have an excellent female character with Agent Nicole who is also a fully developed character with history and skills and equality with Yancey. But there are no other marginalised characters – no POC, not LGBTQ people (though Yancey has a two-women-having-sex fantasy dream). Ok there are not a huge number people (human people) in the cast but no minorities at all is a pretty lacking.

In all, I like this series so far. I like Yancey and I think Yancey will be even better with the introduction of Nicole if she keeps being a present force it will be awesome as well. I like the world setting, I like how it is growing and we’re getting more and more sense of the epic which is growing while still keeping a very personal focus. The writing is good, the world broad and the characters intriguing. But the diversity is lacking and there’s a real need for more plotting and development in between all the gun fighting and zapping magic.