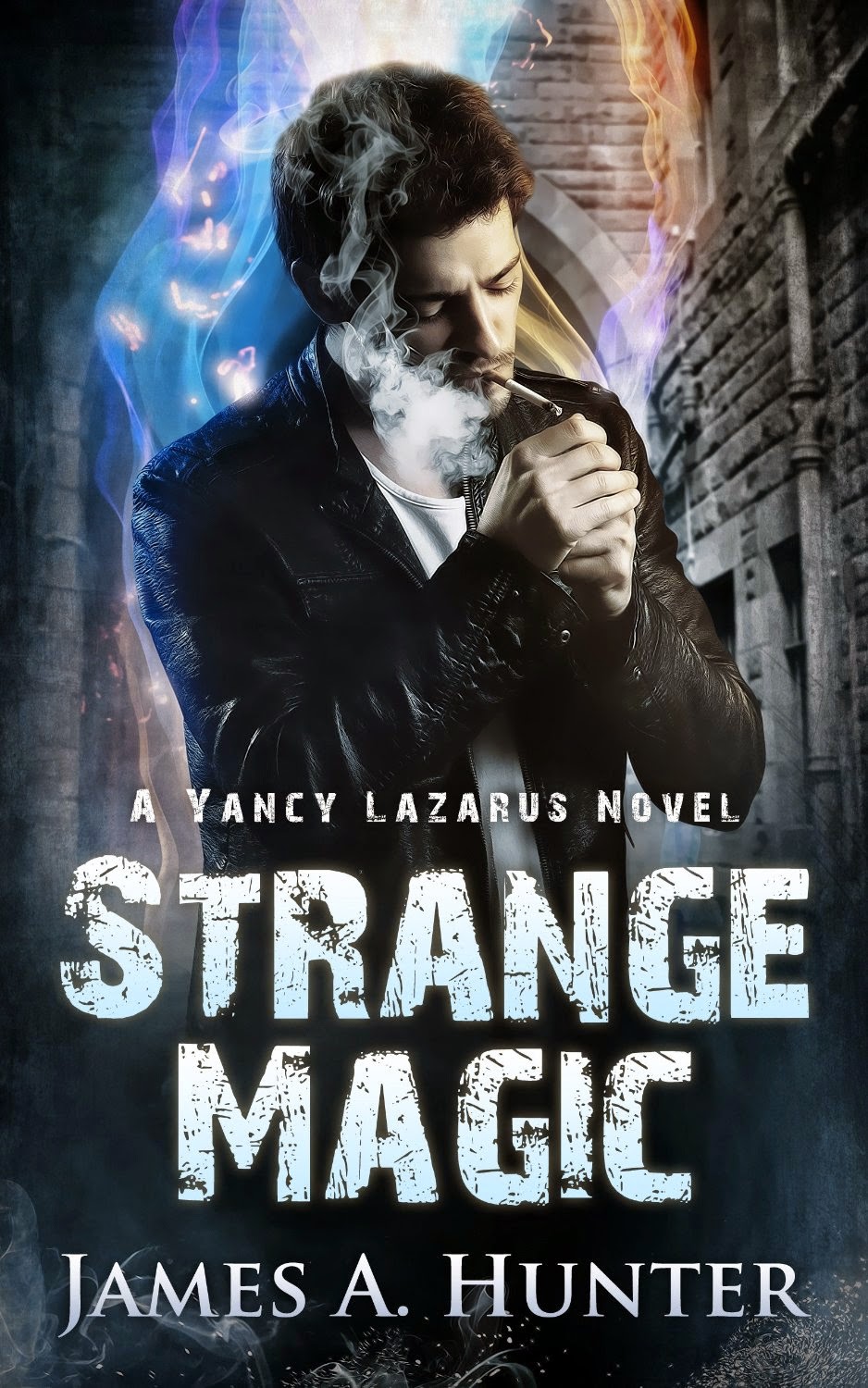 Yancy Lazerus, wizard, rambler, rogue, musician has lived a long, exciting life and now wants to spend his time eating good ribs and listening to good Blues. But his bleeding heart would never let him stay quiet when people are in trouble – especially when his oldest friend Greg calls him to deal with demons ripping apart people.

Of course, even if he could ignore his conscious – he can’t ignore the fact he has been framed for the deaths and there are a lot of angry men with guns who want to shoot him in the head.

I really like this world setting. It’s a classic every-supernatural-there-ever-is all squashed in, so I won’t say it’s inherently original, but it has original twists. It feels very Dresden Files with just a little more gritty thrown in. With such a wide array of creatures to call upon, Strange Magic has gone in a generally different direction – the beings of the Hub and the creatures from Hindu mythology are not things I’ve seen very often before.

I also quite like the idea of the Hub, again, it’s not entirely something I haven’t seen before, but this gritty melting pot has a lot of potential and interesting additions to the story. On top of this, we got a lot of nicely detailed world building and description that screams of books and books of notes that really makes both the magic system and the magical world seem very rich and fully fleshed out – I like that a lot

This world has immense potential.

And Yancy runs through this world in a rather wonderful Noir investigation. Through gritty and grim Blues bars in the real world to equally gritty bars in the Hub – the world is shown to great advantage with the story taking us to many parts of it and revealing lots of aspects of it along the way. It has the building blocks to being an excellent supernatural Noir story. But there’s some problems that hold it back from that excellence

The first of which is Yancy is supposed to be 60 and look about 40. I don’t really believe this – his voice, his dialogue, his mind set all makes me think teenager or, at very best, early 20s. It’s not entirely a bad voice for someone who is that young – and a young wizard running around snarking away with this much banter and even childishness would be kind of fun. But he isn’t a wizard in his early 20s – nor would the characterisation be solid enough for that.

Because we take this wisecracking, snarking, 60 year old teenager and then desperately try to pain Noir all over him. It’s really clumsy and jarring. We’ll have several lines of Noir exposition describing how gritty and dark and seedy the place is, the grimy jazz clubs and a lot of the general staples of Film Noir – and then into the middle of it runs this wisecracking frat boy making juvenile jokes (albeit sometimes funny ones) and generally not so much breaking the mood as shattering it with big big hammers. Which is a shame because a lot of effort has been made in setting the tone of the world

And it’s not the only break in the writing. As we’re going through the story there’s these sudden, huge flashbacks in an attempt to exposition Yancy’s character. Sudden derail into his time in Viet Nam or his dad cooking ribs or absent family that he’s no longer part of or a woman he once loved. Even without the flashbacks, there’s sudden long, overly detailed exposition about Blues music or his favourite gun. Would these be interesting character nuggets? Potentially, yes – but they’re dropped in almost randomly and in far more detail than they need to be. They also don’t work as character creation because Yancy himself is so confused as a character – these flashes to the past are nostalgic, sad and often painful – they’re supposed to be poignant and even scarring; but Yancy as a character only occasionally has the depth (he’s pretty inconsistent) to carry this kind of history. Again, I feel like there’s this 20 year old character and all this back story has been thrown at him but it isn’t sticking and the character we're left with is a bit lost.

I have to repeat that I don’t DISLIKE Yancy as a character. He’s fun, he’s snarky, he’s a little cynical but his conscience rules him. He has depth and characteristics and hobbies and memories and is generally a character I like – but then there’s this long wounded-old-man-of-the-world thing being dropped on him that doesn’t fit very well. I think this book would be immensely improved if Yancy could be written one way or the other – the experienced world-weary bad ass with the deep, poignant history who is tired and wants to stop but whose conscience won’t let him. Or the snarky, cocky kid throwing himself into things with a kind of madcap glee and lots of dripping sarcasm. Be one or the other or make these two sides merge better than they have been – which would have happened more if we’d seen more of Yancy’s development rather than just random unconnected flashbacks.

Because of these character hiccoughs, I think I’m a little less forgiving of the general world building of the books. There is a lot of world building exposition about the way magic works, various supernatural creatures and realms – as I mentioned above, this world is really rich. Most of this exposition is conveyed through Yancy’s internal monologue and it works – it isn’t bad. The problem is that this book also has a lot of Yancy flashbacks and broken Yancy character building which means the additional monologuing that I would normally be fine with becomes more of a problem.

This also applies to the story itself – if I isolate the plot writing it’s really well done. The pacing is nicely done, there’s some excellent mixing of world building with action (which is really well written as well). There’s lots of twists to the mystery, some nice red herrings, some side plots that work as part of the overall story while also advancing the world building and leaving nice hooks for future books. The plot manages to be interesting, twisty and have multiple aspects while also nicely displaying an entirely new world. The plot would work

Why it doesn’t work for me is that my patience is already stretched by random Yancy flashbacks, or long winded Blues expositions or fractured characterisation – which means that overly-long side quest that could have worked now just feels like an extra add on getting in the way of the plot. Like the side-step to the Hub to speak with someone about getting transport turns into a rather long deviation involving fighting cthonic monsters and mechanical-spider-dwarfs. It’s not a bad deviation and pushed out some great world building – but having this on top of Yancy’s flashbacks and distractions makes another side plot unnecessarily lengthy.

Diversitywise, we have some interesting elements. There’s a sizeable Latino gang in the book which hits a whole lot of stereotyped buttons; but at the same time they’re very humanised, we see their families, their mutual loyalty and their skill – they’re not a huge role and they’re not individually developed to a great degree, but collectively they are a little more than the usual “Latino gang members”

I do like Greg. He’s an older Black man, Yancy’s friend and much more mature and sensible (and they have some decent banter and some pretty awful banter because of Yancy’s chaarcterisation). It’s a really good, strong friendship that I can really feel on the pages. More, Greg doesn’t exist to either be rescued by or to serve Yancy – in fact, Greg calls Yancy in to help his mission. Even with Greg calling for help, there is no sense of his weakness and his capacity, skill and strength as an ex-soldier and current supernatural police is always extremely clear, even if we don’t spend nearly as much time with him as we do Yancy. Greg brings a mundane power to Yancy’s sparkling woo-woo.

There’s also a Hindu mage to go with the Rakshasa and Daitya, I like that we have supernatural beings that are directly connected to their culture and mythology since a lot of Urban Fantasy does seem to just raid foreign cultures. There is also some involvement of the concept of Hindutva and Hindu nationalism which I think lacked development, given the issues involved. I do like a nice little point he makes about how most people are quite willing to kill – if they can find a way to kill by proxy (abhorring killing but quite willing to overlook soldiers committing atrocities on our behalf). It’s a very cutting observation and one that is quite hard to argue against.

There is an extreme lack of women in any meaningful roles. They’re in the background when family is invoked, there’s a bar tender and there’s a kidnap victim (a daughter) but generally women are really absent in this book. I honestly can’t even remember the name of a single woman in it or more than a couple of lines of dialogue. With such rich diversity of magic and woo-woo it is really glaring that anyone with a meaningful role is a man and women are little more than wall paper. There are also no LGBT characters.

This book leaves me torn. Because I want to love it. There’s so much here I want to love – the concept, the world, the potential characterisation, the magic system, the many many hints that are scattered throughout the book that scream at me to keep reading. I want to love this. But the execution is so lacking and in need of work that I didn’t. Oh the lost opportunity! I will keep reading the series though because that potential is most definitely there