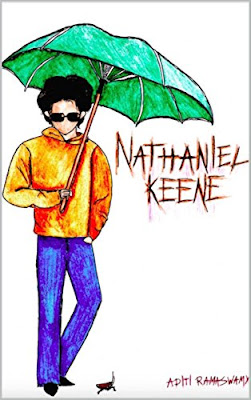 Nathaniel Keene is not a normal high school student. His fascination with entomology and similar geekiness would never make him one of the popular kids. But he was ready for a new start in a new school

And then he becomes a vampire – a vampire because he’s bitten by a cat.

After which, talking cockroaches and a murder investigation just adds to the chaos.

This is definitely an original story – which is rare anyway but in the “vampire teenager goes to school” genre, which is so saturated, it’s fascinating to see something that feels so different. I especially like the difference with how vampires are made and what that means for any possibility for vampire society.

But in many ways, on the face of it it isn’t. We have a teenager who becomes a vampire. And he’s awkward and a bit of an outcast. But, no, he really is. Seriously this is kind of the synopsis for all of these books but they always lie – we inevitably get an extremely conventionally attractive person who is widely loved by anyone but the designated Mean Person. But Nathanial is genuinely an outsider. He’s fascinated by entomology and wants a pet cockroach. Yes we have a genuine weird hobby that ISN’T designed to make our teenaged vampire a super-special and classy (like piano concertos or classical literature or renaissance art).

Nathaniel as the kid completely out of his depth in a new place dealing with a new world really works because this is actually what it is – unlike so many books in this genre that purport to be what it is.

I do think in some ways this book is too short – I think this can be a common problem with new books that start a series – they’re so quick to get to the actual plot line that they miss a lot of the introduction and exploration that is needed to properly flesh out the world and characters. The whole concept of vampirism and how it works – and more, on a personal note, how Nathaniel is reacting to the world he is in and having to adapt as a vampire. The whole idea that he walks around with an umbrella just seems so simple an adaptation to vampirism.

A lot of the world building is clearly hooks for the next book – like there were more supernaturals in this area but not any more – and those hooks are working and I want to know more. But at the same time I’m mildly annoyed that there isn’t more here.

Oh and absolutely no-one has even tried to explain the teacher resurrected as a cockroach thing which everyone just kind of goes with. I mean, really, everyone. Teacher cockroach. We’re all cool with this. Teacher-roach. Which kind of touches on my other sort of issue with the plot.

Now I like the plot. I do. It’s fun, has some nice twists back and forth several times over. It really works and gives us all of these excellent characters and this really intriguing world only in tiny bitesised pieces. But it’s… easy. Like cockroach teacher who happens to drop in with no real explanation but is really convenient to get the plot moving. This happens with a lot of other elements, the plot works out through coincidence or surprising and rather a little dubious elements. It isn’t broken or full of plot holes but does have some unexplained conveniences there

Diversitywise… I am not sure whether Nathanial is a POC or not. It’s strongly suggested that his father is a POC, a man of Indian descent. But it’s not exactly certainly said and you can’t really tell from any description, I’m kind of relying on his absent-in-the-book character being called Neel Kumar. And it’s not like other characters aren’t clearly defined as POC. At least 2 of Nathanial’s friends and clearly labelled and described as such. But the most prominent of them is like Nathaniel – her name says she’s a POC (Yumi Kangjun) without clear description. There are no LGBTQ people.

I want to read a lot more about this whole story and these characters but I’d really like to see more of the gaps filled in, more expansion, more exploration and hopefully this would lead to less convenience.