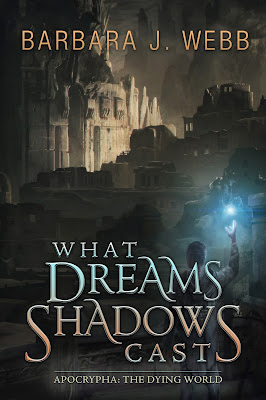 Miroc has been saved from drought but the underlying questions remain – where are the gods? Where did they go and why did they abandon the world and their children within?

The city also is still under threat- Ash, Syed, Iris – everyone is desperately preparing as much as they can for when the Shadows return; the nearly undetectable creatures who can possess people and are trying to bring about the end of the world.

But even this can be displaced when the Jansynians discover something impossible – and need Ash’s magic to try and decipher. The revelations there could shake everything they know about their society.

Ok, frustration moment in a sea of awesome… why did we go here?

No, seriously, I loved the world revealed to us in the first book. I loved that book. I still love that book. That book is awesome. The world is awesome. I love the idea of the 13 gods, an entire society built not just on the belief of those gods, but the tangible existence of those gods, their powers and their blessings. This is a society where praying for rain was literally a sensible form of irrigation. And then those gods disappear – causing both the horrifying impact of the complete devastation of having the entire world’s faith, their entire foundation of belief, identity and how things are be completely ripped from them. A life and reality that they not only believed, but had objective evidence that that belief is correct. On top of that the basic foundations of that society – the fuel and glue that makes their civilisation possible, has similarly being ripped away

This is an amazing world. This is perfect. I could spend 100 books (psst, Barbara, write! Write more!) reading this world. Especially since we have so much more because this excellent, amazing world has been delivered so sparingly – only the information we need to know to advance the plot. We have an awesome amount of information – but nothing excessive. Which means we have a vast amount of the world left to explore. I don’t even know the names of most of the 13 gods, let alone their roles or the creatures they sired. The hints we’ve seen point to these races not just being random humans that look different – but they have their own cultures, viewpoints, purposes that are crafted to be very different from human sensibilities. There’s some excellent world building there

So show me this – now this buried city and ancient past and mighty magic… it’s just nearly all very very very separate from the world that has already been revealed. But can’t we focus on what is here first? I want to see the gods and magic and trying to keep Miroc from imploding to seeing these different deity creatures. This story is excellent and I love it – but I’d love it more at book 5. Let’s revel in the world before shaking it down to its very foundations again, let’s see this world and what people believe before we decide to shake those assumptions.

Let me play in this aw
esome before running to different awesome. I haven’t finished this awesome, it’s not time for the next course of awesome. I know this from the awesome we see – just the expanded ideal of the shifters, the edict to keep changing and what it means to be a shifter who doesn’t change alone is such a deep and layered addition.

While we have a number of supernatural creatures with all kinds of beings (oh, aside, even these differing creatures have separate opinions and factions rather than being one unified faction which I really like. It is so common to have non-human beings be just one monolith. I appreciate that even as, ironically, the story, unlike so many others, actually makes an attempt to explain why they would be monoliths since ever species but the humans were designed to be avatars of their god’s purpose and values. On top of that I really love the whole exploration of what it means to humanity to be The First. How this leads to their – including Ash’s – arrogance their assumption of being right or being more important because they were first and not created expressly for purpose) we also have racial diversity. So many fantasy worlds have huge diversity of creatures while humans are very limited in their depiction – like we can only have so much variety so humans have to become homogenous.

But Miroc is a city whose main human population are POC – it’s also a city with a large number of visitors and refugees from outside the city showing diverse racial makeup. The descriptions are extremely clear, completely unambiguous and Ash is very very clearly depicted as a Man of Colour and self-describes clearly that way.

The depiction of the show’s LGBT characters became a little more dubious. We had Amelia and Iris who were in a relationship before Amelia died (lesbian death, mark the bingo card). But this book we have another shifter and Ash enters into a relationship with him – and we see it in much more intimate detail than we did with Amelia and Iris. Including seeing the shifter… shapehift to a woman before they have sex or are intimate. This could have been a way to show a genderfluid being in a fantasy setting, but I’ve already made the point about world building and the alien viewpoints. The shifters live entirely different lives, as different creatures, different beings – becoming male or female isn’t a comment on human gender identity so much as a comment on the alien nature of the shifters themselves: form is irrelevant to them. This is even made clear when Ash wonders if it’s unfair for his partner to change shape to suit his sexuality and they make it clear that preferred form is pretty irrelevant to them.

It’s a shame because it would honestly have been easier to portray Ash as bisexual – rather than wander around having his partner (this skirting names is an attempt to non-spoil) switching form every time affection was coming. And it goes further by throwing doubt on the relationship in the last book.

Beyond that though I have to reiterate that I do really love this book and love the series more. My complaint is I love this series so much that I’m frustrated we aren’t spending more time on this – explore it, revel in it, roll in it (don’t roll in it, you’ve break your tablet). Enjoy these awesome characters, enjoy these amazing plots, enjoy this perfect world setting that is beyond original, compelling and fascinating and I would read a TEXT BOOK on the theology, history and geography of this world.