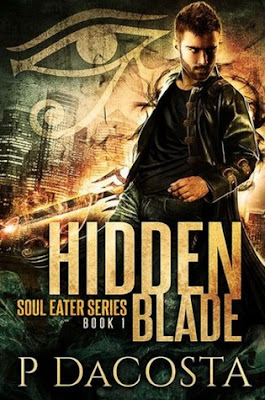 Ace, the nameless one, the Soul Eater, is cursed and enslaved. Banished from Duat, bound to his duty on Earth serving his master and reluctantly linked to a woman who mocks him every day with her presence, he doesn’t have a happy life. The one thing he does want to do is avoid the gods however he can

But when Bastet comes back into his life things get a little more complicated. Not least because she’s his ex-wife

Egyptian gods! Anyone who has been reading Fangs for any length of time knows we love ourselves some good mythology and, surprisingly, the Egyptians are oddly uncommon in the genre, I’ve found. Which is a shame because I’d love to dive into an Egyptian story

And here we have the Egyptian gods in a modern world setting along with a fun, action packed story. And I do really like the plot, the action is extremely well paced but it doesn’t consume the book to the point where it feels like there is no plot as can sometimes happen. I like the characters and their interactions, their complexities and temptations, their histories and difficulties. They work really well together and with the world they’re involved in.

But I find myself somewhat disappointed by that huge potential not especially being examined. What excited me about this was Egyptian gods in the modern world – that would have been exciting and interesting and deep and we could bring in lots of excellent mythology. But… we didn’t really see the Egyptian gods. Oh, Osiris and Isis are there – but they’re just mighty powerful evil people. You could have changed their names to be anything or anyone, they could be powerful mages, fallen angels, pretty much anything which is kind of depressing. There was no sense to me of them being actually Osiris or Isis. They were just the big powerful antagonists the culture, the history, the resonance behind what they are is missing

On top of that, I really dislike how Isis is portrayed – conniving and manipulative? I could accept that even if it is beneath Isis (the paragon wife and mother, the mother goddess, goddess of artisans and maidens and so much more) – but to have her sexually shamed – to have Osiris happily . To demonise her both through her sexuality (and her bisexuality for extra unpleasant tropiness) and using that sexuality as a classic marker of evil/depravity/immorality/corruption would be generally gross with any female antagonist – but to decide to do this with the actual lore around Isis and what she could have been just seems to add totally wasted opportunity on top of an utterly tired trope.

We have a much more humanised presentation of Bast and some more examination of what she represents – goddess of cats, goddess of pregnant ladies. But, again, a werecat who really had a soft spot for poor women or pregnant women would have filled the gap. Especially with the way Bast ends up at the end of the book.

And that brings us to our protagonist, the nameless, the adopted son of Ammit the Devourer – how could we not explore this? But instead we see a supernatural being with a difficult, dangerous and angst-worthy hunger. It’s for souls. But it could have easily have been blood or meat or the common supernatural hungers we see quite readily

I’m not saying any of this is bad or the plot is bad or even the characters are bad. Far from it – the plot’s exciting, the characters are intriguing. I like Ace and his struggle with his dark desires, his grittiness, his power, his bondage to Osiris, his complicated relationship with Bast and even more complicated (and extremely high potential relationship with Shukra – the idea that he, consumer of the souls of the worst of the worst was forced to be linked forever with one of the worst souls he’s ever come across – their mutual hatred and grudging respect is interesting to see grow). I like the plot line, the action, the potential of the woman they’re trying to save. It’s a fun plot with more than a few fun twists

But with the basis we started with there could have been so much more. I feel the Egyptian mythology setting could have been developed so much further than it has been. I ended up reading a somewhat generic, if still good story, which could have been far more original. Even aside from the mythology there was a lot more I would have liked to see – Ace and Shu, Ace and Bast, Ace defeating demons, the how and why and consequences of that. I feel we raced into the main story fast enough to not explore all these things

And, I say again, I want to explore these things because I do enjoy them, I am interested in them. On top of that we have a cast that is racially diverse, several of these Egyptians at least (Shu, Bast, Osiris) are not whitewashed, though I’m less sure about Isis and Ace the protagonist. I'm nearly sure they're POC, because it would be weird for them not to be when Osiris and Bastet have clearly been labelled as such (JUST, seriously we danced around a lot with Osiris) especially with Isis and Osiris being siblings. But then we have a moment where, in describing Osiris to Ace, we have a woman say how exotic and foreign he looked... to Ace who presumably shared the same "dark hair, tanned skin, like he came from somewhere exotic." Sure, she could be the epitome of cluelessness to say that to his face but... I prefer portrayals with more overt descriptors and less implied-but-you-can-ignore-it-if-it-bothers-you implications and hints.

I liked this book but can’t escape that nagging feeling that it could have been more. Of course, as the first book in the series, it definitely has the potential to be so much more.