Year of the Boar: Tica (Changeling Sisters #1.5) by Heather Heffner 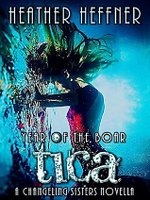 Tica has struggles to fight – bone cancer has left some devastating effect on her life and her future. Her dreams are severely set back and she has to fight hard to be someone other than “the cancer girl”

But there’s another struggle looming – the cursed Vampyre Prince Khyber has come to Hawai’i with a mission: he wants to die. And the keys to doing so lie in recruiting Tica to the fight to protect Hawai’i and the spirit world from desperate spiritual attack.

This book did an excellent job of filling in a few of the gaps – there are characters I read about in Year of the Tiger that I felt had a lot going on that I had missed. Which was true – but the elegance of the series is that I didn’t need to know Rafael’s backstory to understand Year of the Tiger, the battles that were fought or why Rafael felt the way he did. It was clear that Rafael had a major life above and beyond what Citlali saw, and that wasn’t a bad thing

Which is something else this story does excellently, we continue the whole metaplot of The Changeling Sisters series but also get to exp

I think, perhaps, this would have been improved without the focus on Khyber, to be honest. I think it would have been better served with a less involved vampire – or even no vampires at all (do the taking over dark spirits need the direct vampire presence to be an issue?). It would have done better at giving the idea that this is a battle across the globe with different warriors struggling against them. It would expand the universe.

But it still did expand that – because Khyber was pretty much unnecessary to the main plot of this book which was definitely, overwhelmingly Tica’s story. Which I also love because it sets another champion up who is every bit as awesome as Citlali

And Tica is awesome. She’s passionate and determined. She isn’t perfect and definitely has some painful, difficult moments with her friends and certainly with her mother. But she’s extremely knowledgeable and tough and faces both personal battles, accepts the vastness of the supernatural and absorbs and adapts to it well.

Her story is really well written, excellently paced as it matches development of her character and the world, her difficult, painful relationships, her very painful struggle as well as the action involved in fighting to save the spirit world and fight off the dark spirits (and the dark Spirits of Plague are horrendous – and much better villains than the vampires that seem almost clumsily inserted to the rest of this awesome story) as well as a lot of Hawai’ian mythology

This book has a large number of Hawai’ian deities and spirits, especially Poli’ahu, one of the goddess of snow, being majorly involved. Kamapua’a being intimately involved with Tica’s story and the story of Nanaue being fundamental to this overall story with Mo’o playing a vital role at every stage. I especially like that these were allowed to exist and explore and be the prime actors in the story without them being minor characters in a larger plot and world. While it’s clear in other books there are other deities and legends, here, in Hawai’i, the Hawai’ian deities are the centre of this story, they are the powers, they are the ones who are important here. These legends are the ones that are going to absorb every part of this book, they’re going to be the ones who will be important here and be part of every plotline.

I do like the way the story ends because it’s complicated. It is kind of Bitter-Sweet happily ever after, it’s not all fun and happy; it’s layered, powerful, sad but strong. I like it, I appreciate the complexity and levels to it and the lack of shiny, simple, everything-is-perfect ending

We also have some really nice way the identities of these characters and their struggles are present in this story. We have Aolani fighting for success and a future career in the hotel industry only to see how they use her culture and her name. We have Kyoko discussing what education will actually help her succeed – but that means less attention for language and culture she doesn’t see as being useful to her, which are de-emphasised

We have a large cast of POC here. Tica is Latina and Hawai’ian. Kyoko, her best friend, is Japanese. Aolani and many of the other characters are Hawai’ian. The very rare white character is openly mentioned as such as he is the different one in their POC collection. And issues like these above are nicely incorporated in the plot without in any way distracting, derailing or turning it into a PSA book. Many of these characters have their own storylines – Kyoko and Aolani both have their own plot lines.

We do have a minor gay character who is kind of not really involved in the plot. The word “sashayed” is also used which… really? Let’s not

Tica, in addition to being a Woman of Colour, is also a disabled woman. She is battling bone cancer and has already had her arm amputated. She has had to struggle to change so much of her life, what she wants, what she loves, her dreams due to losing her arm. She worries about medical bills and what that does to her family. She lives under the fear that she may have suffer a remission – again it doesn’t completely consume her character but does massively influence her and inform her. And we don’t get a magical healing story either

This series is wonderfully complicated, it’s extremely racially inclusive and this story has made a real stride in expanding the world setting, the series and the mythology. It’s fun, exciting, deep and layered and really fascinating – it’s a more than welcome addition to our library.