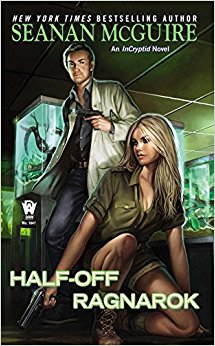 Alex Price is following his family tradition of Cryptizoology. He is living with his non-human grandparents (he has a complicated family tree), working as a zoo keeper in the reptile house and continuing his research
Of course, the zoo authorities don’t know that his research is into the breeding habits of basilisk and tracking whether the local fricken population is changing. All the while trying to juggle a relationship with the big cat keeper, Shelby while keeping all his secrets

Then people start dying - turned to stone. With his basilisks, a local gorgon population and a cockatrice running around, there are several possible culprits.

Hail! Hail the God of Scales and Silence!

Yes, every book review in this series is going to start with a homage to the Aislinn Mice who are made of utter awesome. And my main complaint about this book is there wasn’t nearly enough Aislinn mice. More of the mice!

I have to admit I went into this book with an immense amount of hostility - because the protagonist was changed from Verity to her brother Alex. And it is Change and I liked Verity so I opened this fully prepared to say how wrong and unjust and awful this is and, in the name of the mice, we must bring Verity back.

Thankfully I was wrong - or, rather I was overreacting. I liked Alex as much as I liked Verity - even though they are very different people - and I like that, that they were clearly different people with very different approaches to their family legacy (while Verity is conflicted, Alex embraces it despite the frustrations). His focus on science, breeding and studying crytpids in the wild with a focus on reptiles and amphibians is very different from Verity and her urban focus. But he was still so interesting, utterly invested, scholarly (same as Verity with a different focus) and a whole lot of fun. I am happy with Verity and Alex

But even better is Shelby the Designated Love Interest who is so many more times more interesting than Dominic. It would have been easy to make her less scholarly or educated or science based than Alex, especially since he’s the geek and she is blonde and attractive - but I love how that is definitely challenged and she is more than happy to stand toe-to-toe with him intellectually or action-wise. They work really well together, are great fun and she has a nice developed history and a clear personality. I liked her a lot.

Of course, the star of all this is the world building. The way cryptids work alongside natural world - both the non-sentient and the fully intelligent. I love the little nuggets like why cockatrice and basilisk petrify. I love the careful world building - like how a gorgon community cannot have livestock because they’ll petrify the animals. It’s little details like that that really make the world

As well as bigger elements that point to a really well detailed and carefully designed world: like the fact the Covenant, which hates all things Cryptid, basically declared war on all Australian wildlife- because Australian wildlife. Which again is an insight on Cryptozoology in different parts of the world (like the Australian concern for invasive species). It’s these details and development that make this world truly special

On top of that I love how the cryptozoology meets standard zoology and Alex’s concern that the Fricken - a feathery frog - is going to be discovered. I like that there are concerns around cryptids that doesn’t just concern how dangerous they are or people they’re killing - it adds an extra level of Cryptic management to the Price family’s mission

And then we have fun bits like the different kinds of Gryphon - I do like that a lot. These fun bits - like the Aislinn mice - just really finish it off

Of course of top of all that we also have an excellent story complete with mystery, revelations, explorations of this awesome world, chance for these characters to really show off their competence, their fun, and their development. Some excellent action without it bogging down into one long fight scene. Emotion without it feeling false or convoluted and some strong family bonds with Alex’s non-human grandparents and cousin Sarah (with her own story of healing) shining alongside the developing connection between him and Shelby. There were twists, there were fears, there was a lot of investigation, there were moral quandaries, there were explorations of different societies and different Cryptids and the weird Price priorities, and world building and lots of threats of violence no-one takes personally and it was just so much fun!

But it needed more mice.

In terms of POC we had a local Wadjet family who are south Asian being part of the story and having an arrangement with Alex (also drawing on both Indian mythology and using Indian characters to do it). I don’t know if Dee, a major character and local gorgon, Alex’s guide to Gorgon community and his assistant at the zoo was latina or not: description wise there’s no real indication but she does have a hispanic surname - which i think is from her husband who is definitely described as having bronze skin. So I would say POC we’re looking at minor characters. We have no LGBTQ characters.

This is a series that is beginning to concern me - because I’m reading them at a great rate and I rather think I’m going to run out soon. Which leaves me with the many short stories - now how many short story reviews can I really justify? But this is not allowed to end!