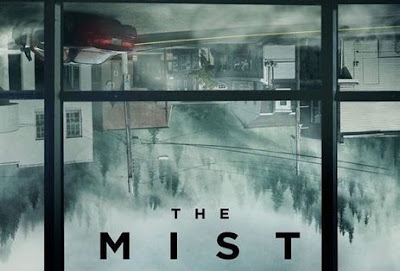 A brand new show and we open with a guy who knows as much about it as I do since he has amnesia - he’s a soldier (or dressed as one but doesn’t apparently have dog tags) with ID identifying him as Bryan. He also has a dog called Rufus - in case you failed to read these names, Bryan helpfully reads it all around. Whereever he is, it’s pretty beautiful.
t’s the kind of scenery I could stare at for hours. On a HD television. In a centrally heated house with wifi and the ability to order pretentious coffee by the internet.

He wanders around until the Mist comes in - and turns poor Rufus inside out. Literally

Right guys, you’ve all be warned - there will be gore. Though i think the writers may be misreading their audience - most people are going to be way more upset by a mangled dog than they would be by something like, say, a child.

From here we go to a teacher called Eve who is being suspended by the headteacher. Ahem, amnesia bloke in the mountain and butcher mist? Unless Eve is being suspended for turning the class pet into a taxidermy plot, I want to go back to Bryan

Apparently she’s being suspended for teaching sex-ed much to the shock and horror of puritanical parents who want lots more teen pregnancies.

We’re not going to follow the 8,000,000 characters in this series with a brief series of introductions and a complete lack of people being turned outside out.

So we have Eve’s partner Kevin who plays permissive cool parent next to her restrictive controlling protective parent. That would be towards daughter Alex who identifies much more with her dad because he never says no rather than her mother because she always has to be the bad guy (which annoys Eve immensely).

Alex’s friend is Adrian, a bisexual boy who wears eyeliner and has a homophobic father who hasn’t spoken to him in 2 weeks for being a bisexual teen wearing eyeliner and a homophobic mother willing to let that stand. Adrian, in theory, is very socially aware, sadly the writer isn’t and it’s more like he just spouts word salad from social justice sites without context (hey, writers, male privilege exists, wel done for acknowledging it. But the idea that a bisexual man uses male privilege to drool after football players is just bizarre, ignores straight privilege and homophobia. Gay/bi men don’t generally get the privilege of being able to overly list after football players).

Alex has a thing for Jay the Popular Football Player and Jay’s dad is Connor, the sheriff/head of police.He’s not a fun guy.

Throw in Mia, a lady whose mother has recently died, she’s come to town to try and get her hands on a huge stash of cash, passports and who knows what else buried under her old shed. Sadly she doesn’t own the house any more and the current home owner is pretty aggressive and gun toting when it comes to defending his shed. She also takes pills - I’m getting the vibe of drug user rather than ill. She has enemies judging but the guy in the cow-shed who tried to beat info out of her (she killed him with a pitchfork).

She ends up in the gaol after being caught trying to dig up the shed floor. So does Bryan - he isn’t dead, but he does charge into the police station and rant about something in the Mist. The police have absolutely no time for him and lock him up, smacking him around when he protests. Absolutely no-one recognises that he is army or needs help. I don’t know if this is an attempt to recognise prejudice against the mentally ill or Black men or just shoddy writing that the sheriff can see a man in army fatigues and not try to call his CO (and, for that matter, thinks it’s fine manhandle) This pretty much concludes Bryan’s involvement - stuck in gaol screaming about the Mist.

And we have Nathalie and her husband - elderly hippies.

Intros done, to the plot!

Alex wants to go to a party with the football players especially Jay. Eve says no, Kevin is narked because she said no without even talking to him but Eve points out he always says yes and she just ends up being the bad guy anyway and how tired she is of this.

In the end Kevin caves and goes behind Eve’s back to tell Alex she can go anyway - but no drinking and back by midnight. Their parenting is… not idea. Alex goes, dragging Adrian who doesn’t want to be there but sidekicks don’t get choices. There he expresses his dislike and we get the inevitable homophobic attack by a football player calling him a f@ggot. Jay gets to step in and show he’s not so backward and offer a drink and comfort to Alex - they both leave, completely ignoring Jay who was the one attacked (Alex is a terrible friend)

The next day Eve and Kevin find Alex in garden on the swing - she says she blacked out at the party and when she woke up she knew she had been raped.

Ok… that was far darker far sooner than I expected from the pilot of a show about monstersin the mist.

Adrian said it was Jay who did it.

Eve is absolutely furious with Kevin over saying yes. HE doesn’t want to stifle her but Eve knows what the people in this town are like - also unspoken is the obvious that as a woman she is far more aware of the dangers a woman faces than Kevin’s unaware self.

They don’t fight in front of Alex because they recognise that they need to be united for her. Eve is also quick to tell Alex this could never be her fault. Which is important and I think this is going to need stressing more especially as the storyline of Kevin and Eve fighting over “permissive vs protective” since “protection” and “restriction” can teeter on the line of needing to follow the rules to avoid rape which can also stand close to the idea that a woman who doesn’t follow these rules is at fault and partially to blame. There’s also the whole sense that a woman cannot/should not do so many things because of rape: so the emphasis in this not being Alex’s fault really really needs emphasising

This show is brutally accurate in how Alex is treated. Jay is the football star, his dad is chief of police/sheriff (I have no idea which) and very very popular. The rest of the team hassle and vandalise their home. The locals (including those judgy school parents) are on Jay’s side. The police treat him softly-softly and even reporting the harassment is hard for Kevin due to Connor’s position. I’m, not even going to say they all believe Jay - because even Connor seems to be focused more on telling Jay he won’t go to prison than them knowing he didn’t do it. It’s an important addiction - because the demeaning of rape victims comes not just from not believing them (though that’s obviously a huge amount) or blaming them for their rape (and again, that’s a huge amount) but also from the sheer dismissal of rape as a serious crime.

Alex leans on Adrian who provides comfort and a brutal summation of how bad it’s going to be. Eve decides to take Alex to her sister for a while to get away from the harassment - without Kevin. She’s so angry with him she needs some time apart (though the rift between her and Alex makes this difficult)

I will say that The Mist is paying enough attention to this to cover both how terrible it was for Alex but also the re-victimisation of her in reporting the rape, yet another reason why so many victims don’t report rape. But I worry if this storyline is going to continue to get the insight and respect it deserves and needs when the Mist rolls in

Which it doe. It’s also really ominous : Kevin and Adrian are at the police station with Bryan and Mia (Connor quickly runs), looking for weapons when one of the police is eaten by insects. Kevn releases them because Bryan argues leaving them for the Mist will kill them while Mia, who is all kinds of sharp and snarky, makes it clear she makes a far better ally than enemy - and openly mocks his conscience that definitely won’t let him leave them to die.

Speaking of - Alex and Eve are at the mall, Alex hurries inside out of the Mist when she sees a body on the floor. Horribly judgy lady decides to leave with her son into the Mist and the screaming starts. We see her try to get in - with her entire jaw removed

Her jaw has been removed. Something in the Mist removed her jaw

Nope. Nope. Nope. Oh nope. See I wanted to celebrate her horrible death but they removed her jaw!

Whatever did that just yanks her back into the Mist like she’s a rag doll.

All the power goes out. And everyone cries and is stunned in horror looking at the doors. The frail glass doors. Why are you not running? There’s an upper storey right there! MOOOOOVE!

Check in on the hippies - walking though the Mist they run into a traumatised man who shoots Mr. Hippy then himself. Nathalie, (Mrs. Hippy) runs to the churc)

Well that was a full pilot….