The Edge of Awakening (The Soul Tamer Series #1) by Alanna J. Faison 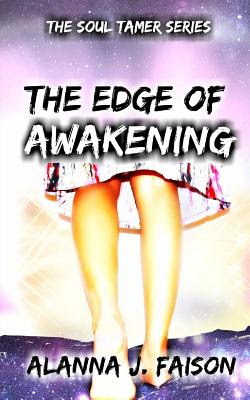 But how much was her family hurt by this destiny?

This book is a spin off series of the Rayne Whitmore Series, following Rayne’s dead sister, Jasmine. Jasmine is destined to become a Soul Tamer, joining a team of other new Soul Tamers, trained by Micah and other mentor Soul Tamers into their powers, skills and missions.

This adds a whole lot of interesting world building to this already excellently rich world. I think it’s an excellent idea to use a new protagonist to do this as Rayne couldn’t exactly stretch to cover this without severely distracting her own story and generally slowing things down

Instead using a new character and a new world we have an excellent chance to build into more world building, using the first book in a series to have the usual introduction to a series without derailing an already ongoing plot line.

And this world building is extremely good and interesting - the general use of ghosts and demons, the different powers and abilities and how they work and interact. I really like the little nuances like how simply being the most powerful doesn’t make you the most effective.

But more than the general world building is the personal stories of her fellow Soul Tamers - albeit some of the needing more development. All of them are young and all of them have had tragic pasts - but their pasts point to a lot of terrible injustices in the world, from starvation and poverty to hate crimes that starkly covers a lot of this diverse cast.

A lot of this book covers their training and I do like some of the interractions - probably Cas and Rayne the most because they do strike sparks - there’s respect and competitiveness and they’re probably not a great fan of each other but it’s not full on girl hate we see quite often in urban fantasy and young adult.

Her closest companion is probably Jayce, but Jayce is the LGBTQ representation in this book and it’s not really done well (another character may be a lesbian or bisexual but she also may be asexual, it’s not clarified yet). At one point he calls someone out for assuming bisexuals are just looking to have sex with anyone all the time - which is great. If that pretty much wasn’t the sum total of Jayce’s character. He exists to hit on guys, and that’s basically his characterisation even when said guys are not interested in him.

Her mentors and fellow Soul Tamers come from many different races - Micah is biracial and from segregation America, Dorian is Middle Eastern, Kenji Japanese and Atara, one of her peers is described as having brown skin

Jasmine herself is Black.

There’s also some brief looks at class as Jasmine is very aware of her family’s great wealth that she became so used to and stands out starkly against her fellows who faced hunger and debt.

I do think that Jasmine’s mentor etc were both not very forgiving and kind of dismissive about what she went through. How she died, how she became their chosen one, the implication that they were behind her “earlier” death. There seemed to be little acknowledgement that she was only 14 or how her death deeply affected her sister and led her to take some very severe risks. Yes, everyone has had a tragic past - but hey that kind of makes me question the way they treated everyone, rather than think Jasmine needs to suck it up and move on. While there’s a lot of bonding there’s also a real sense of judgement at times where they’re quite harsh, make no allowances expect a lot of her and even a little gaslighting. Like they seem to use the team to guilt her for feeling, for hurting, for feeling angry. It had an edge of manipulation that made me considerably suspicious of the powers that be here and I’m not sure I was meant to regard them with this level of suspicion - because part of me is kind of expecting them to get a severe call out or be revealed as a villain. But I think I’m getting the utter wrong end of the stick there.

The second element I had a problem with was the ending. I hated the ending, I really really hated it. All book we’ve had this intelligent, determined, sensitive, passionate excellent character who then, for no discernable reason, decides to throw common sense out of the window and make the most ridiculous decisions ever. She trusts someone she has absolutely no reason to trust. Someone she has every reason to think is evil. She decides not to consult any expert or authority or any of the many many many many people around her who know so much more about these things than her.

The only thing more annoying to be than a protagonist doing something so obviously foolish is that you just know it’s going to turn out right and she’s going to be right despite every indication being that it must be a terrible decision.

I’m also very leery about the guys who talk about how attractive and good looking Jasmine is. She’s 13. It’s a couple of references and certainly we’re not in romance mode here - but I could do without any reference at all. There is an excellent point aout the powerful Soul Kings who seeded humanity with woo-wooness sleeping with women under false pretences presented as rape since the women didn’t know who or what they were sleeping with.

There’s a huge amount of this book I love - plot, development and characterisation but the ending makes me cringe which is a shame because everything else about this book is so excellent with a lot of potential.