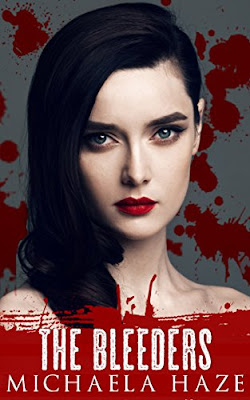 Sophia was a barmaid in London. She had a life, friends, a job, a family
And then her sister died. Sophia fell into a deep, dark depression to which she is sure only vengeance against her sister’s murderers can possibly release her.

The hitman she reaches out to is a daemon - and though he is able and willing to do what she asks, in doing so she risks dragging herself, mind and soul, even further into the darkness

This book is a somewhat hard one to review - which is appropriate because it is a hard book to read.

The book is… powerful. Powerful is a good word: because it’s not fun. It’s not an easy story to read. It isn’t packed with action or even, for that much of plot or world building. Both are certainly there and create the setting and background for Sophia, but this book is about Sophia and her journey

Sophia does not lead an easy life. She suffers from extreme mental illness - depression, schizophrenia. She is pulled down by alcoholism. Most of this is triggered by the tragic death of her pregnant sister and her inability to get over this as well as her rage at the men she considers responsible for this. Sophia is a deeply damaged and hurting person and a lot of the book examines this. Her struggle with her mother, her struggle with mental illness, her alcoholism, self-harming, pushing friends away who care for her, her house denuded of all furniture for fear of invoking her sister’s memory while still maintaining a shrine to her sister.

The book is told from two different time periods - the present when Sophia is confined to a mental institution, suffering from some severe hallucinations and recounting her past while plagued by delusions and hallucinations. The other is the actual past she’s describing, drowning in depression and pain. Both are stark, brutal and very powerful

This continues when she find Henry and she starts to move out of her pain - and I admit I have a big note here screaming “gah, magical healing penis!” because she seems to be getting over her issues quickly. I then crossed it out - partly because of the woo-woo, but mainly because this is the next stage of her rollercoaster ride: obsession with him, abandonment, another addiction and hitting a whole new low of rock bottom as she transmutes her issues from one to another which does an excellent job of subverting the idea of romance healing all mental health issues

I also really like how even the base of her tragedy - her sister’s death and even her mother’s callousness are all just a bit more complex than she initially presents in her complete obsession. I like that, I like that things aren’t as simple as her angry, hurting mind portrays and that there are layers to her experiences which go beyond simplistic villains who hurt her.

Her obsession over Henry leads her to another, far darker place, one of addiction and desperation and again there’s a lot of interesting layers here. On the surface it feels almost empowered, she’s strong and capable and determined, she has friends, she knows what she wats and aggressively pursues it. But her friends are fellow addicts and she would willingly discard any of them if she had to. Ultimately when she is not feeding her addiction her life feels empty and broken and she hits a terrible level which shows just how hollow her apparent strength is. It’s teased out in excellent scene after scene as addiction, obsession and delusion combine toxically for her and bring her down again and again.

Of course, there is a supernatural world - particularly with Henry. An incubus, a creature driven to feed on people, a man trying to find a moral way to do so; a moral way to kill as best he can. Alongside him are appearances from William which sets up a somewhat cliched, old-as-the-genre moral monster vs immoral monster. We have an interesting hierarchy among the demons which suggests a wider and deeper world which may be explored once Sophia moves on to a different chapter of her life. But in this book I think the woo-woo is more an introduction and a backdrop to Sophia and her origin than anything else. Effectively, with relatively few modifications, I think changing Henry to any dangerous man Sophia was obsessed with and her addiction to heroin instead of magical blood and we’d still be telling a story that is very similar to this one - but it wouldn’t be a story that led to what is clearly coming in the series

There’s one POC - a room mate of Sophia’s and a fellow blood addict, but no real inclusion beyond that. She briefly has a female friend who supports her and there are characters around the periphery of her life (another friend who shows how well he’s doing by getting on with his life while her’s is falling apart) but the focus is very much on Sophia and Henry, mainly Sophia, leaving every character outside of that somewhat periphery. Still, no LGBTQ characters and only one POC in London is far from great inclusion.
Sophia’s own experiences of mental illness is the main thrust of this book and it is powerful and dangerous and difficult and non-stigmatised and painful. And not just in examining how Sophia feels but how people treat her, the stigma and how even professionals treat her as a walking avatar of her disease. There’s an excellent line:

I’m left thinking it’s a good book, but not a fun book. It’s a powerful book, but not an enjoyable book. We’re following a hard and dark chapter in someone’s life. It’s no light, fluffy, fun, amusing or even entertaining. It isn’t a book you pick up with eagerness or put down with regret - relief perhaps, but not regret. But it is powerful and impactful - it is hard to read precisely because it is willing to dwell on the pain and loss in such detail.


It seems almost shallow to mention given the power of the book but… it also really needed an editor to give it a once over.