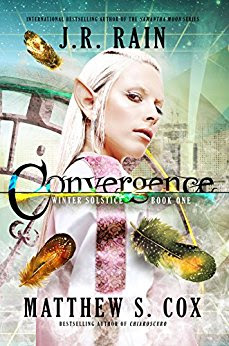 Solstice knows magic exists but she’s one of the few who does - and it doesn’t overly affect her job as a photographer or her relationship. Unfortunately, since neither are doing extremely well.


And then something happens, the Convergence - and Solstice’s career is definitely picking up. Oh, and apparently she’s not even human. While being an elf explains a lot of things, it also makes her very much in demand. Including by some very unethical people...


Ok, shameful confession time - I had pretty low expectations of this book and had all honed my snark ready to take this on. Mainly because of one thing: “Solstice Winters”. Yes the protagonist is called Solstice Winters and in no way was there any indication that this was going to be a parody.


But it is neither a parody and nor taking itself ridiculously seriously and Solstice is duly mocking of her own parent’s silly naming choice.


Instead we have a really interesting world to explore which is light hearted and fun (and with a protagonist who is very much both - I really like her) and pretty much a joy to read.


The concept is one we’ve see a few times - magical realms are getting close to Earth which leads to the normal magical lite Earth suddenly having scads of woo-woo and magical creatures that were never here before which causes some upheaval. What is a really fun take on this is Solstice waking up in this new wash of magic and having the illusion torn aside and realising she’s an elf. It’s one thing to have a world that suddenly becomes magical - we’ve seen that a lot - but to have the protagonist wake up and realise she is a magical creature (and always has been) is a great twist.


In some ways I think it could be a greater twist if adapted, extended or, perhaps, if the book weren’t quite as funny and light as it is. I mean, we have examples of how elven attitudes have always influenced Solstice (casual nudity, connection to nature, not seeing sex as a big deal) but there isn’t much look at her analysing any of her behaviour/attitudes/thoughts and thinking “am I human”? Or even “Am I elven”? Or “where are my people?”. Of course this book is pretty heavy on the action and probably hasn’t given her that much in the terms of introspection.


But related to that there is a moment where Solstice is kidnapped by typical Men In Black and subjected to some deeply invasive testing and then talk about putting you in a cage which is kind of swept under the rug and everyone gets over that really quickly. I mean, she’s a reporter - and she’s not the only humanoid/intelligent Numina out there (after all, she was captured when watching a faun) who may not have the legal protections and police friends that Solstice has. I call shenanigans on this just being skipped over.


On that friend - I do like Jadea lot. She’s mixed-race Black and Asian and is a lesbian in a relationship. She talks about that relationship with Solstice, not because it’s plot relevant but because they’re actually friends and act like it. Jade doesn’t play a huge role and isn’t present a lot but from what we do see it’s clear she has a strong position in Solstice’s life. Solstice also has other friends in the paranormal society, who appear briefly but even in that brief moment we have an insight into their relationships - as well as a good relationship with her boss.


While none of these feature highly, because of the aforementioned action, I bring them up because there’s a very real sense that Solstice has a life and had a life before elven-ness et al dropped on her. Often protagonists simply don’t, they’ll have 1 hobby, a slew of dead relatives or maybe 1 or 2 good friends and the rest will be VOID. Solstice doesn’t - she has a network of friends, a career, ambitions within that career, work colleagues (two of whom seem to be POC), an entirely not-tragically-murdered family (and thank you for being sensible about Solstice being adopted) and all of these have a good sense of being people. She even has an interesting relationship (with a latino man) with attached perfectly mundane drama (before supernatural drama takes over) with her boyfriend who is so perfect on paper but not so much in person…  and her own thoughts about who she feels she should want to be with.


We also have a new friend of Solstice’s who is a Maori character who is a Manaia - and I’ll be honest, my knowledge of Maori legend is severely lacking and I had to google that


Solstice does think on prejudice and worries how she will be treated as someone so blatantly different - but she does so generally without appropriating real life prejudice, or glossing over prejudice that actually exists recognising both what Jade has to endure and the microaggressions from her boyfriend.


We also find out that elves are sexually free which has always been Solstice’s opinion and she’s happily unashamed and unjudged for this but nor is it turned into blatant titillation (even when put in a ridiculous elf garb).


On top of this we have the plot - which is a couple of secret societies, some kidnapping and lots of woo-woo. It’s more an introduction than actual exploration - but it is fun and we do have lots of plot hooks coming up