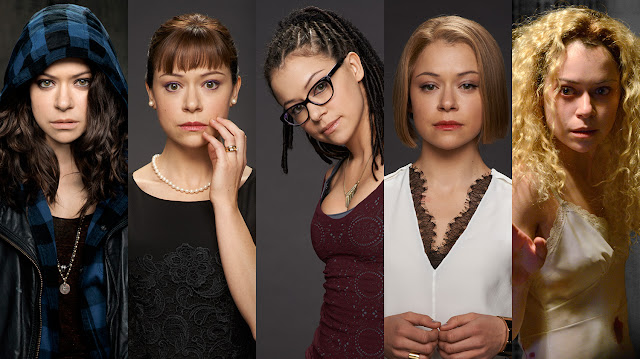 It’s said all things have to come to an end. This was said by someone who has never seen Supernatural (I also heard that Last Man on Earth has been renewed for a fourth season - proof that there is no loving god). However, in most cases it is true and many of our shows, beloved, hated and, most often, a bit of both.

So we come to our first Requiem - the Requiem for Orphan Black which has ended after five fascinating series.

I have to admit that I had my doubts about Orphan Black in the first season. The first few episodes seemed very confused and the writers had difficulty committing to something as simple as a location for the show.  I can chalk that up to the ambivalence regarding Canadian television but that didn’t make it any less irritating.  Look, a Canadian show can sell abroad, particularly when it has a talent like Tatiana Maslany at the helm.  Not every Canadian show has to be like Corner Gas or the Beachcombers (shut up, I know I’m aging myself).  Five seasons later, the finale of Orphan Black is a loss of Canadian broadcasting and it will most certainly be missed.


Tatiana Maslany. She. Is. An. Acting. Mutant. I am still not convinced she ISN’T a series of clones. Honestly this show only worked because of Tatiana Maslany. We have been in awe of this amazing woman’s unprecedented talent. I think I’ve never seen anything as impressive as Sarah pretending to be Alison pretending to be Sarah…. How? How does an actor even do that? How does an actor have a 3 way conversation with herself? How does she have actual, palpable chemistry between characters she plays? The relationship between the Sestras (especially Helena and Sarah) was deeply, powerfully moving. Tatiana Maslany needs a Scrooge McDuck style vault in her house, only instead of gold it should be just full of award statues.
Which of course made the relationships on this show amazing.

I feel as though at times, the story become needlessly complex and got lost in its own mystery.  This lead to a less than satisfying ending in terms of cloning.  Were we really supposed to be happy that after spending all of that time watching the sestras fight Neolution that Sarah managed to easily dispatch Westmoreland?  I understand that the point is that the Clones were able to form their own sort of family at the end of the day but I certainly felt short changed in terms of Neolution and genetic experimentation.  For crying out loud, they had Kira go all mystical, introduced the Castor Clones, human augmentation that involved tails and of course monitoring. By the end, there were so many moving parts it’s as though the writers just wanted to wrap them up quickly and forget that there was supposed to be some kind of context for all of this.

Here Orphan Black had a lot of peaks and valleys… and, let’s face it, more valleys than peaks. Over 5 season and with an enormous number of characters we have five recurring POC characters (I’m not including the Hendrix’s children in this because I bet half of you can’t remember these kid’s names without google and certainly can’t remember what they looked like). Simon Frontenac was an obedient Black assassin and… that’s summed up his character. Evie Cho was an evil Asian scientist. Which pretty much sums up her’s. We had Vic, a Latino drug dealer and… ok even writing this list is beginning to feel like “match the trope to the minority.” We had detective Angela… but I feel any storylines involving her kind of swirled into the morass.

Which leaves us with Art… I’m pretty sure he had a family at some point, I’m sure someone threatened them to make him co-operate. Did we ever actually meet his daughter? The sad thing is that Art has been part of this show since Season 1, Episode 1 and by Season 5, Episode 10 I don’t think we know any more about him than we did then. He had no real storylines of his own, was tangentially pulled into the plot because of a relationship with Beth who started the show already dead which is a somewhat convoluted and weak motive. Many times Art felt less like a character and more a useful tool, a classic token, the police contact. For a character this involved this was flat

Which applies equally to Felix. Again, present from the first episode and from day 1 he has been an overwhelmingly stereotypical Gay Best Friend (or brother in this case). He exists not just to support his sister, but ends up being the GBF to the clone club in general, especially Alison who never hesitates to push the call button and summon her gay supporter. He’s comic relief, lacks any real storylines of his own (or any development - even his art was some vague thing almost until the show ended- and even then Sarah couldn’t stay focused for five minutes) and his entire life revolved around Sarah and the Sestras. Again, this is classic tokenism and this is not positive. Similarly I would have liked to have seen more of Tony rather than just the single entry.

Thankfully we have Cosima, who is definitely one of the four most prominent clones and the core cast. She had her own definite storylines, her relationships - yes, there were issues with her and Delphine and tropes of love and deception are fraught in LGBTQ portrayals, though this was a heavy trope across the relationships. And when Delphine seemed to be murdered and the unfortunate social media response from the stars, I was ready to break things. But Delphine and Cosima came through it, rose up and were excellent; even if their plot line was closely intertwined with the really confusing science plots.


What We Would Change

The relationship between the sestras was absolutely wonderful and I loved how they worked together each offering their own strength to the whole.  Whether it’s Helena, who kept busy killing God’s creatures, or the very domestic Allison selling drugs to finance their resistance, or Cosima with her scientific research, everyone had a role to play.  Where Orphan Black fell down was in the inclusion of Krystal. Yes, I said it. That’s one clone that felt extraneous even if she did become a fan favourite.  Krystal more than any other clone simply screamed of running out of ideas.

Then we had clones like Tony which could have provided an interesting perspective but never got any real characterisation. Tony was distinct from all of the other clones and could have had a nuanced individual storyline. There’s the added bonus that expanding Tony’s character would have added to the GLBTQ inclusion. Though, yeah, I know that a cis person playing trans* is not ideal it’s complicated with the nature of the clones.

I don’t recall seeing anything quite like Orphan Black on television before and I think that it’s because it required an actor of extreme caliber. Even though Orphan Black sometimes got in its way and become needlessly drawn out and complicated, it was never boring. It gave us sestras and clone dance parties. The writers always knew when to pause and celebrate and to remind us that no matter where we come from we all of something to offer and along the way, all of us in our time will make compromises. For a show a science fiction show, there was a lot of humanity in Orphan Black.