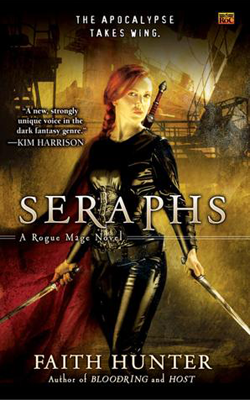 Thorn is backed by some very close friends, a fiercely loyal family. But as a newly revealed Neo-Mage in an aggressively hostile small town she’s on thin ice. Even when her powers may be the very thing keeping them safe from the monsters underground


But are those powers also responsible for drawing them?


This huge, complicated world contains so many wonderful conflicts. A post-apocalypse world, nearly wiped out by angelic and divine wrath, nearly consumed by demonic rage, living in equal terror of both angel from on high and demon from beneath. A deeply religious society, desperately and faithfully following proper sacred rules - but without any clear indication of what those sacred rules actually are, which religion is right and in a world where one certainty they actually have is that religious conflict will get you killed.


And these are just the stories the Seraphs tell… what is the real truth?


And into that complex world we have Thorn continuing her story - only this time revealed to be a Neomage, much to the hatred and prejudice of her neighbours. There’s so many wonderful levels to this whole conflict: there’s Thorn gloriously owning who she is, wearing it like a cape and waving it like a flag. There’s her closest friends and loved ones standing shoulder to shoulder with her ready to cut anyone who looks at her twice. There’s the good people who are pushing for honesty and fairness (and the Jewish and Cherokee communities arming and stepping up in the face of clear religious oppression was a nice, though in need of development, moment). The outright bigots willing to do anything to bring Thorn down. The hypocrites who want Thorn’s magic - but not in public, not where people could see, oh no! And, of course, Thorn makes a convenient scapegoat whenever things go wrong.


Throw in a lot of intrigue about her past and her mentor, lots of questions about whether the whole narrative that is being sold about the Seraphs arrival is actually true and a neat little romance sub plot with some nice twists in that it’s not happily ever after, by any stretch.


I like the people around Thorn, they’re not flawless: the fact that Audric, a Black man is in a subservient position because of his species, the fact that he and Rupert, as gay men, are similarly rendered sexless are both questionable to say the least and Rupert has a bad case of Gay Shark going on with heavily laden stereotypes. All are fiercely loyal to Thorn and along with Jessie make an excellent team around her. She has strong, good relationships.


The town itself is also very racially diverse, though not with major characters, Many important characters - like the chief elder of the town - are POC


Is there anything about this book I’m not an absolute lover of? They actual battle. And not because it’s not epic and awesome and exciting and powerful - but because it’s confusing. Really really confusing, The different angels and levels and one angel’s wheels and the amethyst stone and Thorn’s dreams and visions and this vampire-that-isn’t-a-vampire and CONFUSION. Like the last book, towards the end particularly, when everything is blowing up and the big fight happens it’s really really really hard to follow. There are parts of the whole conflict where I just basically gave up and mentally added “action happening here” because I just had no clue


I could also really do without the mystical lust. But, the series does make a point of making it clear this isn’t a good thing. It’s a curse, it’s an imposition, it certainly hurts the Neomage’s reputation in the highly conservative society in which they live and is actually used as a method of torment, torture and rape for prisoners. It is most certainly not presented as romantic.

I love so much about this book and series and the world alone will keep on pulling me in over and over - but I need more… coherence, explanation, expansion when we get to the more abstract elements of the story