The Rise of Io by Wesley Chu 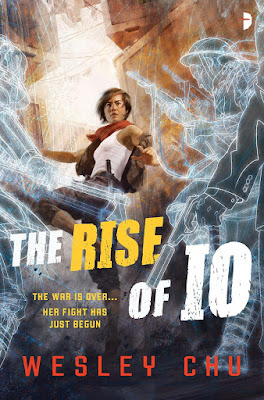 Ella Patel is a con artist, a thief and a young woman who survived and even thrived on the streets of Cratetown, a vast slum that has grown up on the edge of the demilitarised zone in the aftermath of the great Alien War. And one day she found herself witness to a brutal murder, driven to intervene she never imagined she was stepping in the middle of the conflict between the Genjix and the Prophus

Or becoming the new host of the Quasing, Io. A quasing who throughout all of human history has been renowned for… her string of utter failures. This doesn’t make her the best or most useful guide for Ella now pulled into the war between the two big alien factions. A quasing can be a powerful guide - but when that quasing is Io?

In the story of Tao, we saw one of the most powerful and influential Quasing in the history of the Prophus. He has inhabited a series of powerful people who have completely and utterly shaped the world, who have achieved great things, influenced history and been at the forefront of their war against the Genjix. We’ve seen him take some extremely unprepared hosts, like Roan Tan and raise him to greatness, we’ve seen him inhabit Cameron to great effect.

Tao was a superstar, even in the most inept of hosts, Tao was a force to be reckoned with. Tao was terrifying. Tao was powerful. Tao changed the world.

Io is not a superstar. Io is an abject failure. Late to living in a human host, having great difficulty in influencing her hosts and having a long history of leaving them dead in her wake. Io is the excellent depiction of an entirely different kind of Quasing. Not all quasings are skilled world leaders, not all quasings shaped the world, not all quasings made a huge difference to world history - good and bad. And while Tao ended his arc wondering whether Quasings where good or bad for Earth and openly admitting that the Quasings are a dangerous invasive force: Io has pretty much given up on influencing the world at all. Tao is deeply invested in his host, Tao is invested in humans, Tao cares. Io is almost completely done with humanity

Through Io’s eyes we also get some really excellent insights into Quasing society when they were originally on their home planet, how their society worked, how these extremely alien creatures co-existed through the universe and how their hierarchy was structured. And from we see just how different modern Quasing are - they’re so disconnected compared to what they were and their hierarchy has been utterly turned on their head.

What is an equally awesome facet of this book is Ella, Io’s human host. And while we’ve seen Roan and Cameron very much in the thrall of Tao, following in his wake, following his lead and pretty much obeying everything Tao says. Ella is not obedient. She’s not following Io’s lead, she argues constantly, she is determined to live her own life, determined to be paid and refuses to be fobbed off, dismissed or controlled by her Quasing inhabitant. Ella is a homeless young woman living a desperate life in one of the biggest slums in the world - but she is a master of her environment, she is a power in her own right, an expert, fiercely intelligent, brave, resourceful (and all without any dubiousness. No this child of the street isn’t super educated or an amazing fighter, for example) - and if her quasing  is disappointing, she goes above and beyond any possible expectation. It’s a glorious change from Tao and shows how humanity can shine - as well as introducing the excellent conflict between Io and Ella

Those slums bring me to the world building. We’ve seen conflict brewing for several books, with an intro to the devastating third world war in Rebirths of Tao. Here we have the aftermath of that war, of countries rebuilding, and a whole lot of tension as the Genjix and Prophus return to a cold war with ever flaring tensions and maneuvering. The world building is excellent, and there seems to be considerably more research than Rebirths of Tao’s depiction of the war in Europe.

At the same time Cratetown is not wallowing in misery. We see a large number of tough, capable people, men and women (including female gang leaders, and an almost mentor figure for Ella) managing to thrive in difficult conditions. No, it’s not sugar coated, but the complexities of this community can also be seen.

There is huge racial diversity in this book - set entirely in India and an extremely diverse region. Cratetown, the giant slum region, grew out of the third world war, the Alien War, Soldiers, their families, refugees and many others ended up in Cratetown during the conflict creating a vastly diverse cast - Ella is Indian and Singaporean. The head of the Genjix is Korean. Everyone around Ella, bar one, is a POC - with a large number of ethnicities represented. And we have Cameron Tan, and his father, clearly labelled as Asian - I’d always assumed they were but the Tao series was always very very very ambiguous with its character descriptions

There are no LGBTQ characters.


This brook also brings a whole lot of intrigue, a developing world, a whole new direction and a whole new threat for this series - with nice little returning characters from previous books with some excellent action and fascinating plotting. It’s another excellent addition to this world.