We have a new enemy - down in hell Drexel and one of his fellow demons are visited by… Colonel Sanders! 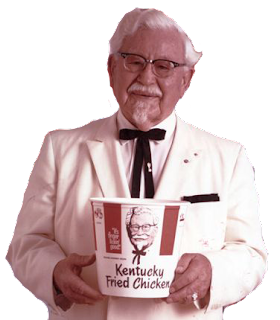 Or Asmodeus. The last of the four Princes of hell - with Azazel, Remiel and Dagon already dead. Still he reminds us all that he and his fellows are pretty much made of power when he squishes several demons he decides were Crowley’s lackies in a horrible manner with little more than a look. He assumes rulership of hell until Lucifer and/or his son shows up to take their rightful place. He seems to be hoping more for the son than the dad - and he plans to be said son’s very trusted advisor… Drexel tries to warn Asmodeus that Lucifer gets… tetchy with the disloyal. Asmodeus takes exception that Drexel would think for even a second he knows more about Lucifer than he - and he has had his own run in


He has scars on his face which are not from spitting fat while frying chicken. This was part of Lucifer’s public humiliating punishment of Asmodeus after he decided to release the Shedim, basically monsters even hell wanted nothing to do with (Didn’t we do this storyline with Purgatory and the Leviathans? Or have we all decided never to mention that again?). Lucifer isn’t entirely out of his ever loving mind so had the Shedim put back and told Asmodeus to keep his chicken dusted hands away from That Which Man Was Not Meant To Know. He decides that this is proof of how loyal he is to Lucifer


While everyone probably realises that this is a somewhat dubious explanation, arguing with someone who can kill people with a handwave is generally not advisable.


Sam and Dean are driving home with Jack and we have a quick recap of how things stand at the moment. Sam thinks Jack is a person who can be good and is still holding out hope to free Mary and maybe even bring some of the dead back to life. While Dean thinks Jack will end the world, the dead are dead and so is their mother and holding onto any kind of hope that Jack won’t be dangerous is just asking for more people to be hurt and killed. Basically recapping last week: Sam is optimistic, Dean is wounded and emotionally cowering in a corner.


Dean seems angry, uncomfortable and torn as this whole debate continues and they stay a night in a motel in which Jack is rather adorkably awkward, imitating Dean like some kind of hero worshipped big brother and generally, as a 3 day old, not really knowing anything at all - not about god or Lucifer or anyone else - certainly not how to use his powers despite them experimenting.


They’re joined by Donatello Redfield, the prophet of god who had his soul taken by Amarra. See this is the joy of 13 seasons of a show - you have amazingly convoluted back stories.  He is there because he sensed Jack’s Awesome Cosmic Power (which makes Dean worried) but isn’t dark and evil like Lucifer’s (which reassures Sam). Of course if Donatello can sense the Awesome Cosmic Power then so can everyone else - including Asmodeus lurking around, pretending to be Donatello and pumping Sam for information.
Dean and Sam try to get round this by getting Jack one of their anti-possession tattoos: after a brief moment where the tattooist is knocked across the room by Jack’s reaction to tattoo pain (and Dean giving Jack a quick lesson on sucking it up) they finally get the tattoos in place… only for them to be absorbed back into his skin. Archangels don’t tattoo it seems. Dean is more suspicious


Dean, Sam and Donatello argue about whether Jack will kill everyone until Jack discovers his ability to teleport just to get away. Sam goes to have a peptalk and nicely sums up Dean’s damage - his emotional inability to express anything other than anger and his inability to deal with all the grief and pain he feels. As well as his saviour complex - he feels the need to save the world and is now faced with Jack which literally may threaten it.


Honestly we kind of knew all of this and didn’t need Sam to exposition it like this. It’s actually one thing Supernatural is pretty good at: showing not telling, inferring the emotional growth rather than laying it out like this.


Donatello also reveals something about Nephilim - they’re always more powerful than their daddy. And Jack’s daddy was Lucifer.


Which is when Asmodeus makes his move - sending in some demons to attack (and Dean showing off his throwing angel blade skills which seems to even impress Sam) while he runs off with Jack, disguised as Donatello to encourage him to embrace his powers. And release the Shedim


Really, he wants to release the Shedim - you know this was coming, right? No way we were going to mention the Shedim without them being released.


It starts to work but before the CGI people have to depict one, Sam and Dean are led to them by Donatello’s woo-woo senses to appeal to Jack. Asmodeus decides to kill them slowly (despite him normally being able to kill things with gesture) which upsets Jack because they’re hurting his friends… the portal vanishes. And so does Asmodeus.


Yes Asmodeus vanishes - now he could have teleported away because he daren’t face Jack. Or he could have been erased by Jack… it’s unclear. Either way Jack is scary.


When they get back to the bunker Sam makes another attempt to get Dean on side concerning Jack but Dean is adamant - he fully expects Jack to learn how to use his powers and kill all the things. He even dismisses Jack saving them as a simple reflex of barely controlled powers - further proof of how dangerous he is. Even Sam telling Dean that Jack is scared of him doesn’t move him - though it does seem to shake him.


Jack seems to have absorbed the same ideas and is busy stabbing himself repeatedly over and over and over again with an angel blade which is both disturbing and terrifying - because the blade wounds just heal. Dean stops him and they have a hard talk - Dean is clear he does think Jack is a threat and one day will have to be stopped - and Dean will be there to kill him. This doesn’t seem to worry Jack - and may be what he wants.


The threat of Jack has been carefully upheld throughout this episode. Not by showing Jack’s power per se - but by telling us that he’s more powerful than his dad - then showing Asmodeus kill several demons just by looking at them and Lucifer annihilating a cadre of angels with a click of his fingers. We don’t have to showcase Jack’s power to highlight why Dean and Jack both should be afraid of his power - because we have these mighty beings displaying their power in their own storylines. I like it - it’s relatively subtle and not convoluted or forced, kudos.


To Lucifer and Mary who continue to explore the dystopian wasteland, dodging fireballs. Mary tries to leave Lucifer but he decides he needs her and is willing to use woo-woo to hurt her when she tries to resist. She’s also attacked by a random hunter and needs Lucifer to save her. Gah, there was no need for that - Mary has saved herself 100 times, couldn’t we have at least kept that? In fact, did we need random rapey hunter at all? What does this add?


Lucifer tears his way through angels who try to smite him in this war torn world - and in doing hears that this world’s Lucifer was killed by this world’s Michael, which amuses Lucifer not at all. Especially when that Michael appears and they fight…. And Michael wins


….nooooooo no no no… this was so anticlimactic! Seriously the two mightiest archangels fight and it’s a glorified shoving match with a pin? I’ve literally seen my cousins have more vicious fights with each other and not even considered it a fight. I call shenanigans Supernatural. SHENANIGANS! 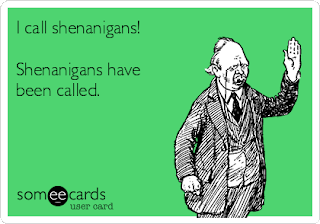