The Rebirths of Tao (Lives of Tao #3) by Wesley Chu 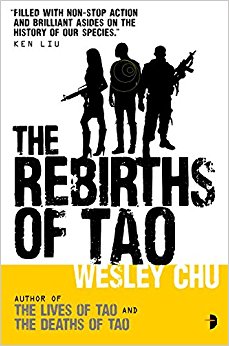 There has been a major shift in the battle between the two alien factions: the Prophus and the Genjix. They’re still in opposition - but humanity now knows they exist and is hunting them ferociously.


It has managed to save the Prophus from complete defeat, but the Genjix are still pushing towards their plan to radically change Earth - even while rent with internal conflict and the human opposition. Prophus must fight them - while keeping under the radar of the human authorities.


We have the conflict of the Tan family discussing Cameron’s upbringing and questioning what they did for their child, what his future looks like and how alien he may be because of that.


We have Cameron and Alex with the teen love affair and poor Tao lamenting the horror of human puberty (and frequent threats to jump off a cliff in his sleep). I loved how it ended, the reality of it and how it didn’t become sickeningly twee or consume the book.


We have Cameron - and I really love Cameron. He is incredibly skilled, extremely dangerous and even as a 15 year old far more dangerous than nearly anyone around him. He’s been backed from a very young age with vigorous training and the brilliant insight of a million year old alien full of knowledge and wisdom. It would have been so easy to turn this character into a juggernaut of Gary Stu dangerousness. It would have also been easy to turn him into a character who mopes around “woe is me why can I be normal”.


Instead while aspects of this are all present and inform his character, none to an extreme. He’s a really balanced character who combines all of these elements while still being very human and really bouncing well off Tao.


Then there’s Roen with his former relationship with Tao and the wonderful complexity this brings with both Prophus - since he’s the maverick former commander who doesn’t quite fit into their hierarchy even with Tao. And now he has a son who is possessed by his mentor which brings another whole level of complexity


And through that is Jill, effortlessly, perfectly competent in so many ways. There is an edge of the woman/mother/wife as keeper: she becomes super competent and a leader because of the manchild she married needs her to play parent. Jill’s an awesome character but the idea that a wife ends up having to be the caretaker of her husband is a problematic trope.


I have to say i spent a large part of the book vaguely irritated at Roen and co for their hatred of the IETF without ever actually thinking about how… right they are. Honestly, aliens have invaded Earth, they’ve been here since the dawn of human civilisation and they’ve spent pretty much all of that making humanity kill each other. Over and over again for centuries. Humanity, the IETF, have every damn good reason to loathe the Quasing


And it’s not like Prophus are necessarily good - they decided humans not fighting may develop the technology they needed to get home: it’s how useful humanity can be. It makes me really glad to see Tao’s harsh summation of his species - as well as adding to this excellent world building; what the Quasing do, how they act on their homeworld and other planets and a really insightful look into what the Quasing actually are and how the Quasing on Earth are so very different from what they were at home on Quasar.


So I had this steadily growing frustration through most of this book - and then we reach near the end and then it is perfectly incorporated and it is AWESOME.
In fact, the ending is awesome. It’s action packed, excellent fights, tactics, so many characters showing their awesomeness. It draws on that storyline of the IETF and it does a really good job of drawing on the Enzo storyline. We have seen his arrogance, his risk taking, his complete and utter confidence in his power and superiority develop and be a staple of the Genjix and their leadership. The conclusion of this is perfect in summing up the flaws of this character we knew was coming but was still utterly brilliant and deeply satisfying to see.


Diversitywise, there are no LGBTQ people in the whole series. There are a number of competent women, especially Jill and Alex and Agent Kallis were all amazing though I think the cast skews male. As for POC… gah, I love every element of Wesley Chu’s writing but he does not describe people (or not that i can ever remember, and normally I highlight)! I think Alex was described - but in a previous review I mentioned that Cameron was a POC - and now I think I may have made an assumption - but Roen was established as a POC in a previous book which I’m pretty sure of.


This is an absolute excellent progression of this series - original from the very beginning and just getting richer, more fascinating and more exciting with very passing book