American Gods: The Good, The Bad and the Awesome 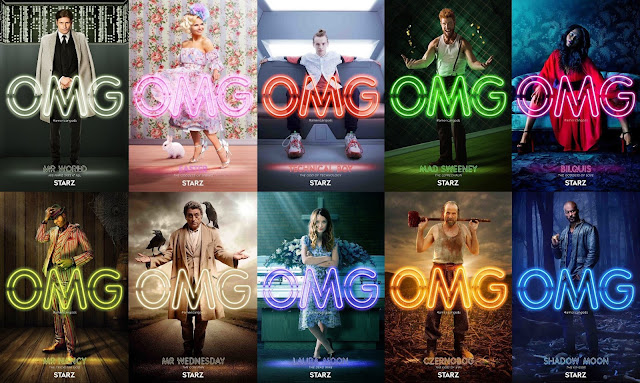 Ever since it was announced that Neil Gaiman’s American Gods was going to be made into a television adaptation, there was a vast amount of hype about it.


I’ll admit, we weren’t the ones overly hyping it. On the whole while the book was interesting and original in some ways, we weren’t huge fans and, we’ll further admit, there was a whole lot of chuntering between us about how utterly overhyped this was and how it was going to be painful to watch. We sat down to the first episode, faces set to frown and all prepared to take on the world and tell you all how wrong you were.


We were ready. You were all going to be told. Oh yes.


For awesome as American Gods is, like everything else on television, it’s not perfect.  Given that we live in a White supremacist world, it’s hardly surprising that the Gods which got the most attention were Norse and or white. Sure, we had two episodes of Bilquis snacking on people with her forever hungry vagina, a Jinn, Mr. Nancy, Anubis, Mr. Ibis and of course brown Jesus, but it would be fair to say that they didn’t feature heavily in the story. The Gods originating from cultures of colour were each given moments of complete awesome, like Mr. Nancy’s speech on the slave ship explaining to the slaves what to expect for generations once they landed.  The problem is that they were additives and this belies the importance that each God has in their specific culture.


I would also be remiss if I didn’t mention the absence of Gods like Kali or Ganesha. Where is Buddha? Where is Muhammad? Where is Hachiman or Omoikane?  There is supposedly a war between old Gods and New Gods and yet somehow, the older Gods who still have power because they continue to be worshipped are somehow absent?   The Gods from Islam, Buddhism, Shinto, and Hinduism are all respectively old Gods and all of them to this day still have a sizeable portion of the earths population praying to them and giving offerings. The writers might have been able to reduce Jesus to a peace loving hippy, who posed no legitimate threat to the current celestial unrest but no such storyline would have been possible with Hachiman or Kali. The centering of Eurocentric Gods in the face of this once again sets up a hierarchal order of what religious beliefs matter and what can simply be dismissed and or ignored because the people who are devout are of colour. Odin, for all of his wisdom and power could not and would not be such a singular symbol of power without the exclusion of the aforementioned deities.


It’s further telling that when Odin did reach out to older Gods to form an alliance he chose Czernobog and Vulcan; two God who are clearly lesser in strength than him. Wouldn’t Hachiman, as a God of war be a far more fitting ally? Europeans have no more claim on North America than people of colour. Just as Europeans brought their beliefs and or Gods, as Mr. Nancy explained, the Gods of people colour also travelled to the so-called new world.


When these Gods arrived, just like European colonisers they didn’t simply erase the people and their beliefs who were present for centuries before.  Why is there no mention of Gitche Manitou for instance? Each Native American tribe had their set of Gods and religious beliefs and what did American Gods offer us? They gave us a white buffalo which died when its people stopped believing in its divinity. For Native American Gods to have disappeared so completely, Indigenous people themselves would have had to disappear.  Given the holocaust brought upon by European settlers and the ongoing resiliency of Aboriginal people in the face of this, their erasure from American Gods, even if not intentional, is quite certainly harmful and definitely myopic.


There’s also Salem and the Djinn; as beautiful as their scene was (and it was), equally the LGBTQ inclusion on this show was a bisexual woman who literally ate people with her vagina and two gay men who had one amazing scene and then never really took part of the plot in any meaningful way. If it weren’t for that beautiful scene, we would probably call these characters tokens.


But really, compared to, well, so many of the other shows we watch (nearly all) it covered inclusion and social justice themes and minority characters with astonishing skill and tact.


The Djinn and Selim may have been only bit parts with no real connection to the rest of the plot line or story, but their scene together was passionate, sexual, beautiful and explicit. In a media which still insists on fade-to-black for any displays of LGBTQ sexuality - and especially two men - it was a rare and precious thing. I don’t think I’ve seen anything outside of over LGBTQ media that has been this explicit - but also this emotional, passionate and clear. Nothing about this flinched, hid, apologised or reduced what it was: it was presented clearly with no filter or reduction and it was beautiful. It wasn’t just sexual - though it was powerfully and perfectly sexual - it was passionate and emotional as well. It’s hard to praise this scene and not be repetitive but we cannot emphasise how special this is.


And the number of epic examinations of race from both the overt to the subtle. Of course Anansi’s epic speech on the slave ship has been repeated over and over again as a pretty epic summation of the future those people had in front of them. But it’s made more powerful with the subtle take down of Essie MacGowan’s story. When any argument about slavery on the internet acts as a clarion call for people to hurry forth with declarations of enslaved Irish, this depiction shows, yes, the brutality, cruelty and injustice of indentured servitude. But it also showed them working for a set term before being free, it showed Essie having avenues to freedom that no Black woman in her position would have had. Essie suffered, she suffered brutality and injustice and we cannot, will not, reduce that for one second: but Essie ended up owning and running that plantation. A stark contrast to the Black people on the slave ship and with this show and it’s excellent imagery the comparison was there.


It’s that subtle reinforcement that really reinforces the messages. Take Anansi’s brutal speech and then follow the Vulcan storyline. An excellent examination of American gun culture, of the obsession of it, of the worship of firearms and the cheapness of life connected - but also the clearly depicted racism that underpins it. With the town members clear hostility towards Shadow and Vulcan’s blatant rejection - we see a reflection in the gun religion that says “personal defence” (and we know who they think you’ll be defending yourself from) and champions open carry for white people but shoots Black children playing with toy guns.


Even Shadow’s lynching, stark to see, which was partially to draw upon the Odin imagery did not lose its racial connotations. Made clearer by the way Technical Boy and Media referred to it - remembering these are the “modern” gods, these are “progress”; and they’re concerned about the “bad optics” of the event. A not-so-subtle jab at the modern push with not being SEEN to be racist, while still maintaining the same bigoted attitudes.


And immigration? Can there be a more brutal take down than Mexican Jesus, saving the life of a man desperate to cross a river and then being murdered by men carrying crosses and guns with holy writ on them? It’s a stark take down of how religion is used to demonise and dehumanise and kill - to such a degree that it’s even used to kill the very avatar of that faith in an act of pure compassion and kindness. This is the kind of commentary we need far more of, brutal, stark and unflinching


Yet even that take down of the immigrant experience is further enriched by Salem’s experience, his miserable life with no connections, no real family, no enrichment; he’s uprooted and adrift and willing to literally abandon this entire new life to follow the Djinn.


I think we also have to mention Laura Moon - an extremely complex, nuanced character who carried layers upon layers of messages for the entire show. And she isn’t a good person, she isn’t a nice person - and that itself is rare. To have a woman, a white woman especially, not be a good person but not be a demonised caricature either is not common: there’s a level of nuance to her. She’s allowed to be selfish, self-absorbed and generally unpleasant and STILL be considered interesting, intriguing and compelling. And while, like everyone in this show, she carried many subtle and beautiful messages but her overall theme was one of agency. Laura made her choices. From standing up to Anubis to repeatedly putting Sweeney in her place: Laura was clear, she directed her life. She made her choices. She doesn’t claim they’re all good choices or moral choices but they are her choices.


Honestly this piece could go on for a dozen more pages and not end. We’ve covered a number of social justice points but we could easily write a small book on the sheer beauty of this show alone. The imagery of every single scene is amazing. You could watch this show with the sound turned off and just revel in the appearance of every excellent scene


We could write a post alone on the nuance and excellent points made by every single line out of Wednesday’s mouth - and my gods that man was born to play this role!


And we could write an extremely large book on all the amazing philosophical implications of the world: on the nature of religion, on progress vs tradition, how progress is still shackled by basic natural forces, belief vs distraction, modern disconnect from the natural world… there’s so much there. In just 8 very very short episodes this opened so much, included so much and just gave us so many thoughts to digest. It is truly amazing