Preacher, Season 2, Episode 1: On the Road 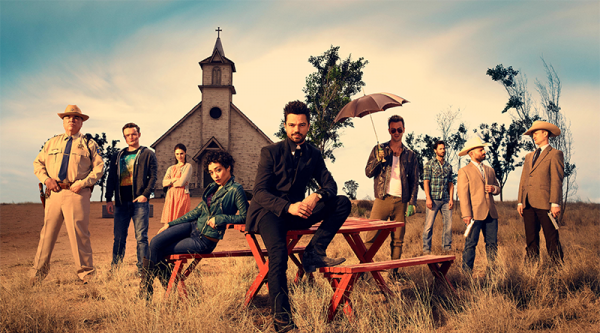 The return of Preacher comes with a definite definition to remind us what this show is all about:

So this begins with our three heroes, Cassidy, Jessie and Tulip and driving to find god, finding a preacher friend of Jessie’s who he thinks will know where god is.

This means listening to odd choices of music, running from the police because - well funsies, I think. Eventually being caught by said police and lots of random silliness with Cassidy avoiding the sunlight and Jessie using his Genesis voice to make the cops do odd things - like sing, or nasty but faintly amusing things (making violent arsehole cop mace his own balls) through to the homophobic - making two cops hold hands becuase men holding hands is so amusing

And lo we have the tone of Preacher often amusing, often silly and then they’ll go just that step too far and we have dubiousness.

Tulip and Jessie argue over him using the voice - shefinds violating people’s minds completely out there unacceptable. Violence she’s fine with. Violence is fair - but the voice? Not right. What is amusing is how they have these calm arguments surrounded by pretty much any chaos around them. They’re even pretty calm discussing it when the sniper starts shooting them

The Saint of Killers has arrived, firing bullets that both cause people to explode and burn when they’re touched, all with deadly accuracy. The gang flees - after Tulip uses an intestine to siphon petrol into her car.

Yes an intestine - because this is Preacher

At least they find a petrol station for more petrol, chance for Tulip to wash the taste of blood from her mouth (with the guidance of Cassidy) and Cassidy gets the chance to snack on a cat before they hit the road again

WIth the Saint of Killers following them, killing witnesses who can’t say where they’re going

They find Jessie’s friend Mark, a biblical scholar who does think he knows where god is. Except we’re starting a new theme here - anyone who knows enough about god to know where he may have gone equally is religious enough nor to be happy with Jessie’s claim that if god has just run off then he’s going to hold him “accountable.”

And again we have an example of Preacher taking the whacky and going too far. People fighting instagram addiction and yelling “one more selfie” whacky is faintly cringeworthy. A man, a preacher, locking a woman in a covered cage? Crossing that line

Mark isn’t exactly thrilled to give information to Jessie, but after an awkward night of Jessie, Tulip and Cassidy sharing a bed, Jessie manages to convince Mark to tell him where god is - after displaying the power of Genesis.

When they leave, the Saint of Killers arrives- and Mark knows exactly who he is ad kills himself before he can tell him anything.

There they speak to the woman who runs the place who apparently (while Cassidy gets into a fight with one of the guards for touching one of the women) saw god once. But doesn’t want to share the information - though she does admit that god was deeply chilling and awe inspiring experience.

But we have another of those kind of awesome arguments between Tulip and Jessie about using the word while the woman looks on deeply disturbed and horrified by their discussion. Jessie wants to know when it’s acceptable for him to use the voice - surely getting info is allowed and she is realllllly annoying. Tulip calls him lazy since he hasn’t even tried to beat the info out of her! Jessie refuses to beat up an old woman, Tulip points out she’s not so old… (all in a perfectly calm tone) before conceding she is really annoying so he can totally use the voice

Which is when she is hit by a stray bullet from Cassidy’s fight, damn it Cassidy.

She does manage to tell them that god didn’t come for the women, but for the live jazz band.

Ok… there’s so much weirdness to this but I’m just going to question how any of those women manage to strip to that music.

To a motel where Tulip and Jessie console each other by having sex. Apparently Tulip has a thing about men breaking down toilet doors

For more random entertainment next week, expect Cassidy, Jessie and Tulip take on the Saint of Killers in a motel hosting a convention for the “Greater Association of Gun Afficionados”. There’s going to be just SOOO much violence and killing