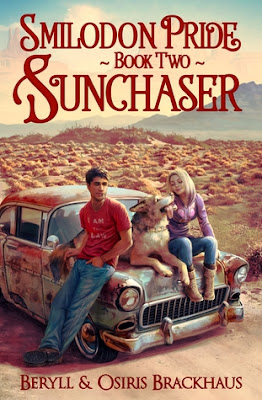 Roen is a loner, a weresmilodon who doesn’t like to spend too long in the same place. He wanders as the mood takes him, alone and working as little as he has to


This book is so much fun


What I love above all else is Betsy. Amazing, awesome, human Betsy. Throughout this book Roan makes assumption after assumption about Betsy. He assumes she’ll be weak, vapid, shallow, selfish, self-absorbed, whiny - and every single time she awesomely challenges him.


But at the same time she doesn’t subvert and shatter (because she does way more than challenge his assumptions) his assumptions by being an action girl underneath the dye and make up (and it is a sad trope that is so common in Urban Fantasy that for a woman to be kickarse and awesome she most run screaming from anything reminiscent of traditional femininity) - she is just awesome complete with the dye and make up. She’s kind and compassionate, she’s smart and she’s tough. She isn’t a dangerous fighter or lethal nor is she filled with rage or jaded or cynical (other so very common tropes for the Appropriate Urban Fantasy Female). She’s hopeful and positive and pro-active, she wants to change her life and she will.


She makes some pretty silly and sheltered assumptions largely because her connection to the supernatural has been entirely through fiction (and there’s some really subtle but quite snarky poking of tropes there, and I do love a good trope poking), but she doesn’t cling onto these ideas past them being proven wrong or disputed. She thinks in stories, some of them very twee indeed, but she deals with reality - whether that’s a brutal firefight with drug dealers or stealing a car or handling the reality of wereanimals around her. Above all she tries - completely out of her element, having to learn really quickly, she keeps moving, she isn’t stunned, or incapable - she learns, she tries, she keeps on plugging and not with even the slightest sense of martyrdom. She doesn’t persevere and learn and try while being suffering and noble - she does it because she’s got this and she can do this. She’s the gem of this book.


This book does a good job of challenging a lot of Roan’s assumptions which I really quite like since he has a  - justly - bitter and cynical world view in many ways and he is shown several times, not just through Betsy, that there are good people out there. But at the same time it’s not done in a way that invalidates the racism that makes him assume the worst, it’s acknowledged that many of these acts of kindness are the exception. There are excellent calls outs of both subtle racism and the more overt hostility he both faces and expects


Roan is mixed race, part Native American and part Brazilian (not clear racially, but he is described as “darker” than most Native americans). He grew up on a reservation, but it’s clear his woo-woo - his ability to turn into a werecat, isn’t actually anything to do with his father’s Native American heritage (and nor did his mother chose his father because of woo-woo but because of the fact he lived more off the grid). However, while his experiences are shaped by racism, I don’t think he carries much of his Native American upbringing: more than anything, Roan is a feline by nature and culture (same as his mother) than a human being which does rather erase cultural markers. The description of his preferred type of women also feels fetishistic of Black women (he isn’t into Betsy because “ebony skin” turns him on - which feels reductive)


Seeing the cat challenge the werewolf is fun, because he is so very cat like. There’s this constant sense of superiority, arrogance and “I’m-just-doing-this-because-I-want-to” sense that any cat owner will know.


I also quite like the idea of a werewolf who doesn’t really know how to be a werewolf. And a werewolf that’s a big lazy dog that keeps pancaking whenever he can and would much rather take the car.


Plot wise? It’s fun but it isn’t all that - some elements of the plot rely on some very convenient coincidences and story hooks. And their story feels very unfinished by the end with only one element of their plot line actually resolved and many more to unparse. The world building is interesting but really only touched upon in briefest moments and then more through characterisation than expanding to look at the supernatural around them. Ultimately, this is a character study - of Roan and his assumptions being challenged, slowly being changed from the loner cat to the person he is at the end along the way with Betsy being awesome and generally perfect. The characterisation is what really makes this book, along with a POC Protagonist and some decent racial challenges.


Definitely a keeper and reminds me that just because book 1 in a series makes me recoil, doesn’t mean it can’t pull it back