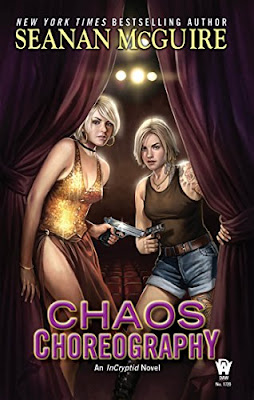 Verity has changed her life dramatically recently. She’s married Dominic, a former member of the Order of St George, which was definitely a surprise (though a family tradition). And she has finally made her decision to follow the family business of crypto-zoology rather than pursuing her career in dance.


At least until the producer of the dancing reality TV show she almost won calls her asking her to come back for a very special season. It’s a last chance at her dancing dream, one last chance to see if this is really what she wants… and one last opportunity she cannot turn down


Except when her fellow contestants turn up dead - and it looks like woo-woo and cryptids may be involved.

Hail! Hail the return of the Arboreal Priestess!


It’s been a long time since we saw Verity and I agonised for a little while about whether I wanted to see more of the rest of the family or welcomed the return of Verity. I know, I’m awkward because I lamented moving from Verity in the first place- and then I discovered Alex, The God of Scales and Silence and much preferred his storyline


But at the same time I love that we are returning to Verity. One element of series with shifting protagonists I’m not a great fan of is we tend to forget the older characters. They just vanish or fade into the background - characters which were once compelling enough for entire books are now seemingly reduced to irrelevance. So I love that we have established this precedence, I love that we can revisit these characters and that no-one with be forgotten. More series really need to take a lesson from this


And despite liking Alex’s story - that doesn’t mean I don’t love Verity, I do. And I especially love how this book is coming back to one of the main conflicts of Verity’s story that wasn’t entirely finished was her conflict over whether she wanted to dance or follow the family business. I mean she made her decision, but it felt vaguely like the decision was forced on her. And that’s not bad - sometimes circumstances over take her dream, but it was nice to see that her passion, her dream hadn’t completely left her and it was important to her to revisit it. I really liked how this was done, seeing her connect to old friends, having her both see the things she loved so much about dance but also seeing them with a new light and, perhaps, with less nostalgia. I really really liked the many excellent, subtle ways


I was a little disappointed by Alice, the Noisy Princesses; mainly because my expectations were so high having heard so much about her but the focus was very much on Verity so her terrifyingness was not the focus. Which was probably the best way to go and she did bring so much of her character with just lots of hints and references which was restrained and excellently done


I’ve mentioned a couple of times that I prefer Alex’s story to Verity - but this is nothing to do with Alex or Verity - it’s to do with Dominic. I find Verity’s husband to be… bland? Who is he? What interests him? What is he doing with his life other than being Verity’s husband? Does he have hobbies? Ambitions? Plans? What conflicts is he experiencing given his huge shift of opinions from being a member of the Order? He just seems… hollow.. Especially next to the excellent characters that are already in this book.


The world building, as ever, remains excellent with a whole lot of research, supernatural creatures and the excellent blend of science and mythology working so well which makes this series so unique and so awesome. Even if it needed more Aislinn Mice (hail! Everything needs more Aislinn mice). Honestly I could write many many paragraphs of how awesome this world building is, but I’ve already said repeatedly in the last 4 books because it is just that awesome. I love it so much I really cannot praise it enough - the different cultures, the way they interact how inhuman some of them are, it really works.


Verity is the main character with Alice and Dominic as important secondaries. There are also her dancer friends - including the woman who won the competition when Verity was in it. She is a Black woman but despite being her closest friend she’s also somewhat sidelined here as part of how Vertiy has moved on. There’s also a latina dancer who stands very very close behind the main characters, she’s a chupacabra, and is a good character to explore chupacabras which we’ve heard about a lot without a lot of examination. I also really like how she brings in class elements and how much the dancing competition means for her - and I love her geeking over Alice.


We also have a bisexual Native Hawai’ian shark man - but his bisexuality is pretty much a one line mention (though it does have an excellent point about homophobia in professional dance) and he isn’t much of a main character.


This book was an excellent advance of Verity’s character - both setting her up for more in the future. It was a nice conclusion to the previous chapter in her life, really well finishing it and bringing it to a full conclusion. All told with this excellent character, this amazing world, enormously fun storyline and, of course - the Aislinn Mice. HAIL!