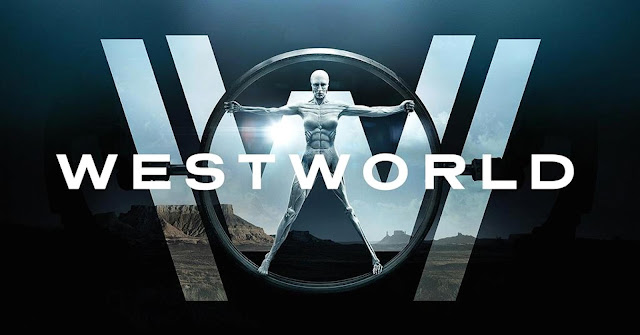 “They wanted a place hidden from god, where they could sin in peace. But we were watching.”

In many ways, Reunion sought to interrogate what Westworld is without actually giving any answers.  I highly suspect that we won't have an answer to that question until the end of the season.

Reunion employs a lot of flashbacks to situate the characters, filling us in on information which we had previously assumed. At some point, for Westworld to have existed, Arnold and Ford had to reach out to investors.  In Reunion, we get to see Arnold worry about whether or not Dolores is ready for her big reveal and Ford comment that it's time for Arnold to stop favouring Dolores.  Yes, even then Arnold is right about where exactly Dolores is at. Unlike the other hosts, Dolores displays a strong sense of innocence as she marvels at the outside world presented to her for the first time. To Dolores, the world word is a dream filled with splendor; her innocence blinding her to it's dark underbelly. It's not an accident that Dolores's first glimpse at debauchery come courtesy of Logan. For Arnold, Dolores is a path to see what what we've forgotten to notice, reminding us that we have just as many blind spots as the hosts, even if they are less obvious.

Last season, there was much debate regarding whether or not wide eyed William was the man in Black.  Now we know that William and the Man in Black are one and the same and season two seems to be exploring how he became so very jaded. Running parallel to William's story, is Delores and her bid to take on the world now that her eyes have been opened to the decades of abuse that she and the other hosts have suffered.  In a meeting with Dolores, William expresses his surprise that he actually fell in love with her. William now believes that Dolores is a reflection of him and that this is what makes her so appealing.  It seems that given Dolores' s burn it all down philosophy, William may be right. The difference of course is that unlike William, Dolores is the victim looking for the only justice she's likely to get.  Her methods may be brutal but they are a means to an end whereas; we  have no real motivation for William's actions or an explanation as to exactly why he is so jaded. If William and Dolores are indeed a mirror for each other, then it's a distorted mirror.

Another parallel to consider is the interaction between the Maeve and Dolores. Both women have been victims of William and both have a long history of being abused by guests.  Dolores grew into her consciousness, whereas; Maeve took it.  Dolores commands the techs to bring people back to life. whereas; Maeve has the ability to issue a verbal command and have the other hosts comply.  Maeve and Dolores are the two most powerful women on the show and though they should be on the same side, because they have unique motivations, they're far from partners.  Dolores makes her best pitch to have Maeve join them, “We’re bound for the future or death in the here and now. There’s a war out there…I can only fathom the revenge that lives inside of you," but clearly, Maeve believes that going after revenge is doing the expected and still operating by the rules of the game that Ford set up.  To some degree Maeve is right and does seem in this moment to actually have more autonomy than Dolores.  Maeve doesn't want to save Westworld, nor does she want to burn it all down, because she quite simply decided to devote no time to that binary choice. Maeve wants to collect her daughter, create her own world, define her own identity that is far removed from Westworld.  Humans to Maeve are useful tools that she employs to achieve her goals whereas for Dolores, humans are undoubtedly the enemy.

In the season opener we saw Ford's body;  however, I'm not certain that Ford is dead. It's clear that he still has great influence over the game and has no problem taunting William using his various hosts. For his part, William very clearly sees Ford's control and the fact that he has been isolated now that he has his greatest wish - to play the game as it were without boundaries - without a failsafe. We know that Bernard is a host, but how much of his consciousness belongs to Arnold? Surely, Ford must have met Bernard, did he never once stop to question why he looks so much like the deceased Arnold? That is a question well worth asking, given that it seems in part James Delos was motivated to continue or take over Logan's investment in Westworld based in the potential to live on and that clearly implies inhabiting the body of a host.  Are we really to believe that Ford calmly walked out to what he knew to be certain death, content to mess with William's head from the grave?  A man who spent his life in control of so much would not simply give up so much power if another alternative existed.

This circles us back to the park itself.  It's interesting that just like the internet and social media, Westworld has moved far past its original purpose. Yes, Logan was shocked to see the scientific leap that Westworld represented but it was William who saw how that leap could be used to gather information.  Westworld, William proposes, should sell itself as sin without consequence but of course, that only works if the guests truly believe that no one is watching and as we know all to well in our technological age - someone is always watching. It's enough to make me wonder about the technology that Abernathy has locked away inside him.  Are they really trying to steal tech or are they trying to steal secrets?

Because I'm a huge fan of Giancarlo Esposito, I can't possibly avoid commenting on his cameo. It's worth noting that Esposito as El Lazo was completely bad ass, even though the cameo was far too short for my liking.  William seeks out El Lazo to help him on his journey, aware that without safeguards, he is going to need help to get to his final destination.  William thinks he has the upper hand when he puts a gun to El Lazo's head but is once again foiled by Ford, when El Lazo's men all commit suicide. It really is a case of be careful what you ask for because now William has his wish but he is all alone.  It also provides yet another parallel to Dolores, who uses death and violence to compel compliance, with the difference being of course that she is successful.  Dolores seeks to play God whereas William has been abandoned by God.

William and Delores are both headed to the same place suggesting that the person who will ultimately be victorious is the person who is first to arrive. Delores describes what they are looking for as a weapon and William see it as his biggest mistake.  Could it be that they are both looking for the terraforming machine.  With this machine, Delores could quite literally remake the world as she sees fit and with the same machine, William could destroy it. One machine with two uses poses an interesting conflict.