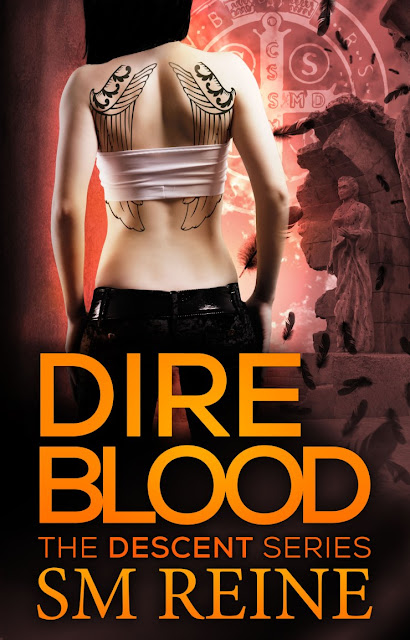 Elise died in the last book. But she’s not going to let that stop her - she’s back and she’s a demon. Much to James’s concern

But the most powerful witch in the world doesn’t have time to adapt to this. Nor can he focus on his newly found, magically powerful son (and budding Elise sidekick) or reconnecting with his ex-fiance. Because he’s been kidnapped and taken to hell to stand trial for breaking the Treaty of Dis

Elise is not going to stand for this.
I expect a lot from the Descent Series

I expect an awesome, conflicted, struggling characters dealing with their own dark issues while handling

I expect major stakes, the world in the balance and all kinds of epic, dangerous figures appearing to assail Elise and her band

I expect an amazing, complex, connected world with extreme originality.

And I got all of that - and so much more because this is a vast turning point for Elise and the world.

What, surprisingly, I found rather interesting about this book is what a dramatic difference it makes to Elise. Not that she’s actually that different a person but that she’s… optimistic? Maybe optimistic is a strong word but after 2+ books of Elise moping in a corner, slowly spiralling into self-destruction. And I have to repeat what I’ve said before - said self-destruction isn’t BAD. Elise is deeply traumatised and handling some major, heavy issues in utter despair. It was a GOOD portrayal but it was a hard one to enjoy. Similarly her relationship with Anthony was just… awful. Again, not badly written awful, but awful because they’re in an awful relationship with two characters awfully out of their depth and hurting and lashing out. The whole thing was a great portrayal but not a fun read - which isn’t a bad thing. But it is nice to move away from it at times because the bleakness can build

Elise has transformed a lot this book - not just dying and coming back to life but gathering a whole new set of powers and even species. But the main change I think is looking at who and what she is - no longer feeling the need to defend Reno, not having the ties she had in Reno, the duty weighing on her, no more concerns about the Union and, even, to a degree not being a kopis any more seems to have freed Elise to set her own agenda to a degree. While she’ll never be a light hearted or sunny character she certainly feels much less worn down and spiralling as she focuses more on James. It feels like she’s going for the priorities she actually has rather than those she thinks she should have.

This change of direction doesn’t just move the character but also the world. We’ve had book after book of my chuntering away “I love this world but more world building!” well, this greatly changes the focus: after last book with the mother and father of all demons we definitely opened up a lot of the mythos. This book takes Elise into that mythos - and in more detail and more understandable detail than I could follow before. Ethereal cities and portals confused me a lot in the past but here we have Elise, in hell, much more examination of the Treaty of Dis and why it matters, and what is at stake, the various dimensions, who James is - what James is - and why that matters. Not only does this expand the book but also more of Elise’s purpose as the Godkiller and her parentage - even seeing more of Isaac and Ariane, Elise’s parents. While with James we see more of his history, his coven, his power and what that added to the world. It made all this vast world building (with some really original and fascinating elements with angels and demons and the nature of Hell (and the really fascinating different demons and the original elements of the hell dimension which is really well done like so much of the world building here)

And so many extra points for the choice of antagonists.

Diversitywise… well we do have a narrow HUMAN cast: we basically have Elise, James, Nathaniel (James’s son), Hannah (James’s ex) and Elise’s parents… all of whom are white and straight. Anthony is there briefly… but it is briefly and mainly to emphasise how he doesn’t actually belong in this new storyline and Elise’s life. There are demons and angels galore, some of which are presented as POC, but they fill minor roles and generally the descriptions are more alien than raced. We do have interesting female characters - I was glad to see Hannah as a capable, intelligent, caring woman but equally clearly not a super woman like Elise. Elise has plot reasons to be super woman, Hannah is a woman doing her best while barely holding it together. Similarly Arianne is cunning, intelligent and seductive: but not really demonised for being sexual even an adulteress. No she’s not lauded for it but there’s no depicting her as irredeemably evil because of it. I like that this shows different kinds of female strength and we’re not just resting on “behold woman who punches things! FEMINISM!”

In some off ways, this book makes the previous 4 books (or perhaps this book and the last book make the previous three books) feel almost like prologues. What happened there was a great story and introduced some excellent characters and established their back story - no it was their backstory. Which made these current storylines, now much broader and wider and more portentous all the more powerful and interesting and deeper and meaningful. The excellent previous books whet my appetite to a razor edge for this book to finally deliver. I love it, I really do because I feel this series is now reaching new heights

But, yes, it does end with a cliffhanger that is worthy of all the death stares in the world.