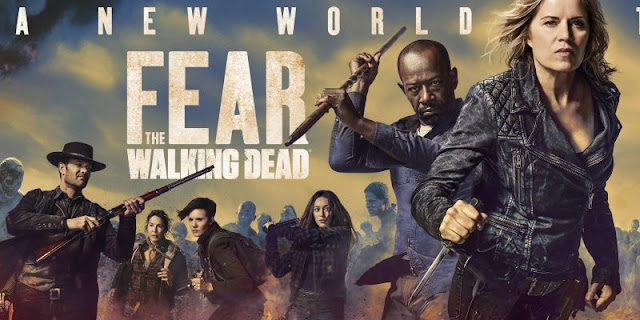 After the hurricane, June and Althea survived. And June is super sad she didn’t go with John. Despite the fact she was definitely in two minds about going home with him and making a happy life together. She throws in a bit of beating herself up - how she always runs when something terrible happens.

She keeps trying to call John on the walky talky. They’re both stranded near Althea’s big, scary SWAT van - they’ve ran out of diesel, but Althea is obsessed with this van. She can’t bring herself to leave it - even as they begin stripping all the resources from the area.

When they get some static on the Walky, June insists they go to high ground to find out - despite Althea being super reluctant to leave the van. And beginning to feel ill which is always worrisome in an apocalypse. You need radical healing methods 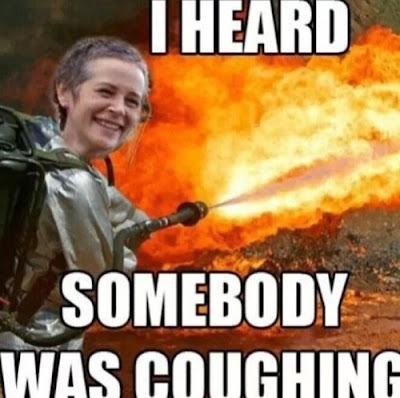 As they travel Althea is very evasive whenever June tries to ask her about her story. As they drive they see her SWAT van drive past - someone has stolen it. Althea is NOT HAVING THAT and charges after them at such a terrible unsafe scene they end up crashing off the road… and when trying to fix the car it’s clear Althea isn’t just a little ill - she’s can’t-stand-sweating-messily sick. She needs medicine - medicine she claims she has on the van

So when June hears the van’s guns she goes to investigate. She’s held at gunpoint by a man and desperately tries to reason with him by not-subtly throwing around this season’s theme. Yes we all used to be evil, stealing, taking, desperately getting by, screw everyone else but we don’t have to be that way. We can make better choices and be good people. Kumbaya et al. He’s not convinced and even makes a good point - if he does join them he will be “guy in group who once didn’t shoot June” which makes him pretty disposable

He’s kinda not wrong. I mean even aside from a “who do we save” perspective, from a narrative point the writers would so make him disposable. I mean not THE most disposable but still.

June does get the upper chance in the fight and suddenly he’s all willing to talk - and he tells him it’s time to leave. She doesn’t shoot him - just drives him off. She then calls Althea to ask her where the medicine is - which takes a while because the very sick Althea is having zombie issues. But that dealt with she manages to tell June there isn’t any - she just wanted the van back

She wanted June to risk her life to get the van back for a lie.

And Althea doesn’t even seem sorry. Even when June explains why she’s really furious - not because she nearly died. But she nearly killed - she nearly became the person she used to be again!

Ooooh that may be that subtle redemption theme sledgehammering its way into the episode again.

Also, Althea… I think we have some flowers for you to look at. You need to drop these habits before you get to Alexandria.

Thankfully they find some magical healing meds and Althea is all healed. But this is when they get a message from Morgan - he’s leading his little mystery tour of Texas broadcasting out to everyone that hey he has loads of supplies, please come murder him. (I mean, really, I get that he’s taken 8 levels of crunchy hippy here, but this is suicidal. “I am Here! I have supplies!”)

June wants to drive to them as soon as possible, naturally. But Althea wants to stay. Because the truck. And at this point we have to concede that Althea’s attachment to the truck is perhaps a bit unhealthy. June asks about this - and Althea says it’s her tapes. She needs her tapes - they not only have the stories of people she’s met but also the stories of several people she loves. Stories of people she cared about, her story. She can’t face abandonning them

Um… they’re in a car. It has carrying capacity. This isn’t The Walking Dead Survival Instinct.

Why go for this? I mean maybe she just really really likes driving around in a giant fecking tank with big big guns? In fact Althea reminds me a little bit like the people of Alexandria before Rick arrived - she’s sheltered. Not because she’s been in a safe settlement - but because she’s been driving around in something equivalent - allowing her to face off against zombies and violent people alike. I think it’s understandable that she’d view this as something of a safety blanket.

June does convince her to come along and there’s a reunion with Morgan and his new followers (who are very sarcastic and not all that pleased to be joining the Hippy Mobile) and lots of hope and happiness. Especially since Althea like new people. And June regrets how she treated the man trying to take the van - and she contacts him on the walkie talkie.

His name is Quinn and she assures him that he will be treated as a full member of the team, an equal. He agrees and heads to where they are… and falls into a trap

A trap? Yes strange Muddy Woman is following them around. She briefly sees Morgan who assures her she can take supplies she needs but she snarls back that she isn’t weak. She’s not a fan - and I think she may be poisoning the water

She still has the old driver of the truck with her, written all over him because that’s her thing with her snarling how all this helping people is making them all WEAK WEAK

Apparently being strong means plastering yourself in mud?

She finds Quinn and sets her pet zombie on him. He gets bitten and this is apparently her way of trading up as she quicks out her old zombie and is now taking Quinn zombie around with her - after drawing on him.

And she now has Althea’s van.

This is probably not good. I’m not even sure it’s going to develop into an interesting storyline because an antagonist who is basically “deranged lady covered in mud” isn’t that menacing. Even with a big truck (which must use just… so much diesel. I mean they run out twice this episode. How long before this tank is pretty much stationery).

While I appreciate a more hopeful outlook of the show since bleak is normally the usual tone - I am still almost comically amused by Morgan’s naivety. He knows there are bad people out there. He must. He knows his band isn’t especially defensible. He must know what he’s doing is dangerous