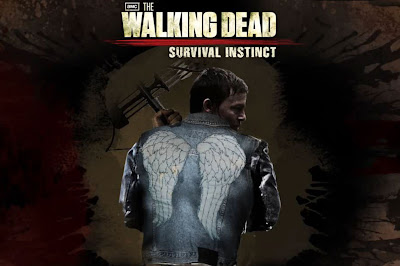 Dear gods I paid money for this shit?

Yes, that’s my opening line and I’m sticking to it

This cheap and nasty attempt at a game follows that old habit of taking a popular franchise and slapping its name on any old shit knowing that fans of the brand will keep buying it until you’ve run it into the mud and the very name will cause pavlovian reflexes of rage in people who used to be die-hard aficionados.

Normally I’m wary of spin off games from TV series for this reasons – but Tell Tale Games Walking Dead was AWESOME, so I thought I’d give it a try.

Damn you Tell Tale Games for giving me hope. Damn you to hell!

This game is cheap and it looks cheap. It has the same kind of graphics I’d expect from a game 10 years older than this. The zombies walk through things, or run into things mindlessly and have no decent pathing. They line up to be killed. You have a move called “shove” which actually makes the zombies stare at you mindlessly while you stab them repeatedly in the head. “Don’t make noise”? You can dance the MACARENA behind some of these zombies with a full one-man-band-set-up strapped to your back and they still will ignore you!  The easiness of killing the zombies means that, other than the odd surprise or big horde (and not even then), there just isn’t a lot of tension. Especially since there are tricks you’re supposed to use – like throwing bottles to distract them – that you just don’t have to do.

This game gets a special prize for nearly making me rage quit during the tutorial. That’s something special.

See, first problem? The game has an auto-save ONLY. No save points, no quick saves, in a shoot-em-up survival horror. And the autosaves are a ridiculous amount of time apart so if you do die or just want to reload or just can’t keep playing until the next time the game decides to autosave, you have to go back a long time to your last save point. As someone who reflexively presses F5 every 3 seconds of gameplay, this annoyed me.

Second problem – we have a long tutorial that teaches you nothing except how to jump and crouch which… really? But it’s ridiculously long, has an interesting twist ending – except the twist mad eme think I’d died so I restarted the game twice before realising I hadn’t screwed up. But, bonus, there’s no autosave between the tutorial and the end of the first chapter – which means, in your first moments of playing this brand new game – you die? You get to do the tutorial again AND watch an UNSKIPPABLE CUT SCENE and some UNSKIPPABLE CREDITS!

Bonus points for my game crashing 3 times in the first chapter. Seriously? Were you trying to make me hate you, game?

As an extra bonus this game has crappy mouse sensitivity – you have 2 choices: "Sensitive" which means your character reacts like someone shoved a cattle prod up his arse if you tap the mouse, but you can use click menus. Or your character can move sensibly and you can navigate the menus like you’re piloting the Titanic with a team of harnessed penguins.

And sprinting – yes brief bursts of speed. No problem with that – even like the idea that I move quicker than Walkers them but can’t maintain it. But is Daryl an 80 a day smoker or something? I’ve seen the show, he seems to be in decent physical shape to say the least, I think he should be able to sprint longer than 20 yards

Am I supposed to love this because I loved the show? Because watching the show and reading the comics didn’t help – except to make me question the concept of the health bar. What’s that for? In case a zombie slightly nibbles on me and then I can drink an energy drink to cure the infection? Damn, someone page Rick, the zombie virus can be cured with Red Bull and Mountain Dew!

The future will be ruled by people who slam energy drinks all night playing MMOs. I don't know whether to gleefully hope for such a future or cower in terror

The collectibles, achievements and other crap are there for you to hunt down and open up new equipment of bonuses for a second play though – yay, just like Mass Effect. Only, y’know, without ANY ACTUAL URGE to play the game again, ever.

And, yeah – you’re going to give me more of Merle’s backstory. Oh, yay. Because of all the characters on the Walking Dead, it’s the Dixon brothers I care about? And I don’t want to spend a game LOOKING for Merle or saving Merle! Where's my option to clonk him on the back of the head and feed him to Walkers?

This is another problem – it misses the point of the Walking Dead. The whole point isn’t “argh zombies kill ‘em all” it’s about character interaction and how people deal in a dystopia – you need to give us more than killing zombies. And this isn’t something for the Walking Dead, it’s something survival horrors in general understand – you need a story, or character interactions, or a mystery – something. If you don’t and you’re going for shoot ‘em up, you need more enemies, more bosses, more and different weapons.

This doesn’t have that. The story is finding Merle and getting to the point where the show starts – except we don’t even get there. We meet characters along the way, but they’re names, brief cut scenes. There’s no tension, there’s no real relationship, there’s none of the human side that makes the Walking Dead the Walking Dead. In fact, part of the resource management part of the game is deciding who to take with you when you have picked up more party members than can fit in your vehicle. So you leave them behind. Just the same as you’d drop weapons that don’t fit

Seriously? This is the Walking Dead. You don’t just “leave someone behind” without at least 3 hours of angst, 30 minutes of crying, 15 minutes of yelled arguments and 5 minutes of Lori hallucinations!  You don’t leave them beside the roadside like discarded hammers because you’ve picked up a big axe instead! Seriously, I'm sat in an average sized sedan and have LEFT PEOPLE BEHIND, alone and surrounded by zombies because I can't possibly have more than three people in the back seat - what does Daryl take seatbelt safety REALLY seriously or something? And the person left behind doesn't make a sound, not a peep, we don't even say goodbye.

This is a zombie apocalypse. Leaving people behind because of the hard choices you have to make is supposed to MEAN something!

And they’re not even useful tools – they don’t fight with you or even talk to you – you send them out on missions to get supplies/fuel and they return with pretty much nothing. It’s not worth it. In fact the whole balancing your supplies and short inventory would be interesting if the shortages actually mattered. Ammo shortages seemed to be caused more by carrying capacity than shortage of availability – and besides, you use melee weapons most of the time anyway. Food isn’t for eating – it’s a health potion, and the only time you run short of them is if you play like Rambo or bother sending your companions out to feed chunks of themselves to Walkers in exchange for a tea cup of fuel and an energy drink. And if you run out of fuel your car stops and you have an automatic mission to collect fuel - which is just like every other random mission of randomness with the same limited maps, crappy textures et al. Nice idea – same with the different roads deciding to balance fuel consumption vs scavenging opportunities – but ultimately poorly executed since it’s pretty irrelevant anyway.

Am I really supposed to be this stoked about playing ZOMG DARYL DIXON that I’m supposed to overlook the sheer crappiness of this game? I am actually insulted that the people behind the show have so little respect for their fanbase that they’ll allow the show’s name be taped on this crap.