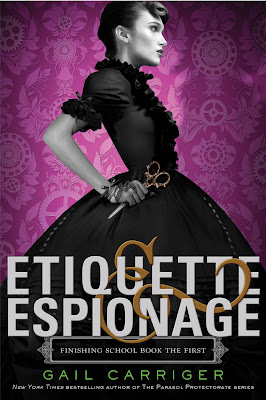 Sophronia is 14 years old, from a very proper (and very large) family – and she is expected to be a lady. Which is unfortunate, because she doesn’t exactly fit – as becomes clear when she spills trifle all over a visiting lady while climbing in the dumb waiter; it all seemed like such a good idea at the time.

In despair, her mother sends her to finishing school – Mademoiselle Geraldine’s Finishing Academy for Young Ladies of Quality, which only the very best ladies go to.

Of course, her mother doesn’t know about the advanced curriculum in the floating school – held aloft by 3 giant blimps. The studies of poisons and weapons, of tumbling, of lying and manipulations; everything an intelligence gatherer – or an assassin – would need.

Learning alone in such a school would be a story in and of itself – but one of Sophronia’s fellow students is up to something – something that has even her teachers perturbed and angry and may risk the school itself. If that weren’t motivation enough, Sophronia doesn’t like her very much and is determined to get involved.

I love the delightful tone of this book, a tone that is common to all of Gail Carriger’s steampunks. We have the delightful formality of the time – the speech, the mode of dress, the stilted, powerfully restrictive modes of etiquette and proper behaviour all combine to ensconce us firmly in the Victorian era. Yet at the same time it’s funny and fun, there’s a lightness to it that both pokes fun at the rigid strictures of the time while at the same time using them to produce endless fun and a lot of good humour.

Even the very basis of the school rests on the inherent jarring juxtaposition of what the finishing school is. Here are young ladies of quali-tay learning all the proper (and relatively useless or frivolous) things such a young lady should learn – the proper way to dress, the way to speak, the way to address people of varying ranks; manners and deportment and attire and posture and polite conversation over dainty teacups and all the other important and vital information.

And then mix it up with the art of espionage and assassination. How does one order a lamb dinner AND strychnine when on a budget? What is the best way to hide a knife in one’s décolletage?

But it’s more than just the mix of the two – it’s how wonderfully well they’re blended. The stifling requirements of Victorian Etiquette aren’t just something they have to work round  - after all, this is something we’ve seen before, deadly assassins, warriors and martial artists who dress up as helpless normal people – even frivolous, silly people – and then cast all that aside to become the lethal people they are underneath. Their fancy top is camouflage that gets in the way and needs to be cast aside and struggled with.

But not here – the finishing school USES Victorian Femininity as a strength, an asset. They have lessons on how to manipulate and control people by the way they faint, on the way they talk and act. They have lessons on inventive applications of a handkerchief, of how a sewing kit is always useful to carry in the most odd of occasions, even the intelegencer’s use of a ribbon. They have fighting styles that relies on stealth and surprise, approaching and killing quickly someone you engage in conversation – styles that rely on manipulation and stealth and people’s assumptions against them.

In order to become powerful, skilled and dangerous these women don’t have to be at war with the traditional feminine gender roles, they can embrace them and make them strong and assets. It’s fascinating in a genre where traditionally presented femininity is so often presented as something the protagonist must strive against or reject to rise above to see women being strong and powerful and even dangerous while embracing this.

Of course, the gender roles are certainly restrictive and that is shown as well – with Sidheag’s pushing against what the finishing school expects of her, preferring simple clothes, much preferring to fight openly (which she does with great skill and capability) with a sword than subtly and stealthily with a knife as the school teaches. And there’s Vieve who prefers to wear men’s clothes for ease of moment. And even Angela who, while not grasping for what are presented as traditionally masculine styles and pursuits, simply doesn’t fit the schools rigid, perfectionist teachings of what a lady should be.

It shows the stifling restrictiveness of these roles and how they’re a painfully poor fit to women who are strong in different ways without denigrating the strength of those who do match them.

We had a Black character in “Soap” and here we have a shakier representation. Due to the attempt to be authentic to the attitudes of the time, characters felt the need to comment on his race – while that’s understandable drawing actual comparisons between the colour of his skin and the soot he is covered in due to his work in the boilers is not. The descriptions cross the edge and cast his nickname, “Soap” into unfortunate implication territory. At the same time he openly mocks the idea that because he’s Black he’s not from England and Sophronia openly states that anyone who dislikes Soap must do so because of his skin colour or class – and she calls that bigotry. Still, to take away from that, his role in the book is entirely to help Sophronia even when it could get him into trouble.

On the class note as well, not only is there an undercurrent of contempt for the lower classes (as well as a hierarchy between the girls – much as Sidheag is disdained for her “masculine” ways, she’s also acknowledged as the most ranking girl present) but there is an interesting byplay in which Sophronia works to prevent Dimity providing patronising and silly “charity” to the workers in the school.

The writing of this book is pretty much a joy. We cover so much in so much detail that I actually thought the book was much longer than it was – I was astonished to see, after I’ve finished it, that it was more a novella than a novel. To have so much information and story, I thought the book must have been crammed – but it never felt that way; the pacing and style worked, conveying all the necessary information with a great deal of fun along the way.

It’s also nicely balanced between hints of the Parasol Protectorate Series, without driving the links home to heavily or too obviously. I’m definitely intrigued by this series.