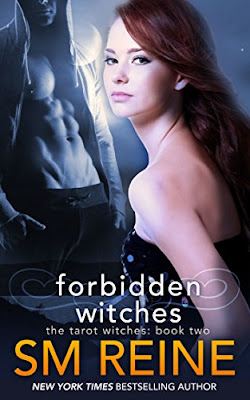 Leah has led a sheltered life… she certainly has never attended many concerts. But even she’s pretty sure concerts don’t usually end up with you waking up on the tour bus surrounded by naked people - and sexy werewolves and witches

I am going to, again, reference my pledge to read every word SM Reine has ever typed in her entire life ever.

One of the mild downsides to this is the Tarot Witches series - because this would probably be a series I would never pick up at any time. It’s a paranormal romance where the romance and sex both is the focus - and it’s a werewolf romance. And for some reasons there’s something about the canine and furry that invites the worst tropes round to play. But with this world, with its complex and overlapping characters, I can’t guarantee some of these characters won’t be super relevant later. Especially since the underlying concept of the Tarot witches is really intriguing - these witches who have some kind of plot to resolve linked to these destiny predicting Tarot cards. All of these women can be extremely different people, facing massively different challenged with this woo-woo bringing the disparate women together. All for a deeper, richer and more mysterious purpose

And damn it I want to know what that mysterious purpose is! This is the world with the whole godslayer narrative, an author who has produced some of the most unique and genre breaking storylines I’ve read and a world so complicated and interlinked that I NEED to read all of this to appreciate the vastness and amazingness. Whatever else happens in this series, I will charge through it because I know some of these elements or characters may inform the Dana McIntyre Must Die series or the The War of the Alphas, I want them to be included, I want to see all these vastness come together because there’s so much here I love

But… this book really isn’t one of them. It has so many romance tropes I find unpleasant: inexperienced female ingenou vs experience male love interest; Magical Mating Bond that get complete strangers to fall in love without getting to know the slightest thing about it; woman instantly trusting love interest despite the extreme danger she’s in; man barking orders and commands and control over woman; woman giving no more than a token protest to all this. And there’s not even a real story like there was in Caged Wolf. No dark past to escape, no figure to defeat - no, the meaning of her card is, not-even-a-spolier, to basically do what her captors say

Yes I said captors. Innocent, naive, Leah, good mormon girl with only a couple of ex-boyfriends and little experience in the rock star lifestyle goes to a concert at the urgings of her Gay Best Friend (yes a gay character. Yes, he’s a walking stereotype. No he does nothing in the book except be Leah’s friend. We even open to him giving her a make over. Actually that’s pretty much all he does). There because of woo-woo she’s given VIP treatment which means getting this very naive woman drunk (at one point tipping her head back and pouring alcohol down her throat when she seems reluctant) after which she gets heavily groped by two men and sat in a bus witnessing. No she didn’t say no. But she was extremely drunk as she makes clear on multiple occasions. This is not ok.

Consent is not something that is considered

But, hey, after being kidnapped, restrained and sexually assaulted she decides the guy doing that to her has too much of an erection so gives him oral sex. Because “I want to escape!” turns into “oh it’s only fair if I get you off too!”

She also repeatedly thinks about the finals at her university she’s missing. The whole opening lines of the book is to establish that she’s naive and sheltered - but it also establishes, almost incidentally, that she’s intelligent, educated and clearly values her studies. Let she’s kidnapped into this road trip missing all her final exams. Honestly just moving this book until after her finals would at least have everyone - including her - not dismissing her education, dreams and goals.

Oh and they reason they kidnapped her is because werewolves have a short shelf-life and Donne’s werewolf dad is on borrowed time. Tarot witches can extend that. Only they don’t know how so decide that the werewolf has to mate with her. Yes, she was kidnapped expressly to force her into a relationship with Donne’s dad. Leah learns this and is… completely and utterly unbothered by it? I mean, seriously not upset that this was their plans for her. Strangers deciding to force you into an arranged marriage with an out of control werewolf old enough to be your dad, this is FIIIIIINE!

Alas, the plan is foiled because she’s magically sex bonded to her intended mate’s son instead. That’s just FIIIIIINE

The plus side is Ofelia arriving - bringing a latina character - who focuses more on the magic, working with Leah and forming a level of understanding. It was good to see her through someone else’s eyes and more clearly seeing her strength and determination.

I also like there are highly sexual female members of the band who are completely free of any kind of shaming or judgement and upheld as capable, intelligent women. And that Leah is a fat woman and still clearly considered sexy.

But honestly I’m scraping the barrel to say good things here. The sheer lack of any respect for Leah’s consent or agency, the first sexual encounter being soaked with alcohol, her being restrained and controlled by Donne

Oh and I hate Donne. He has zero personality, no characterisation at all and he is aggressive, harsh and menacing. And using woo-woo to declare that Leah is magically unscared by his posturing, grabbing he, restraining her, snarling at her (including petting the werewolf. As he transforms. As he tells her to flee. Because she has decided she’s safe. AAAAAARGH) just because the woo-woo says so. This leaves him free to be as much as an arsehole he wants and it’s FINE because she magically knows he’s totally not going to hurt her despite all the menace.

Sexy woo-woo does not replace characterisation or actually building a relationship or establishing trust. This short cut just leaves me even more bemused at her being willing to throw away her life for this man and be ALREADY talking about spending the rest of her life with this man - a walking, muscular mohawk.